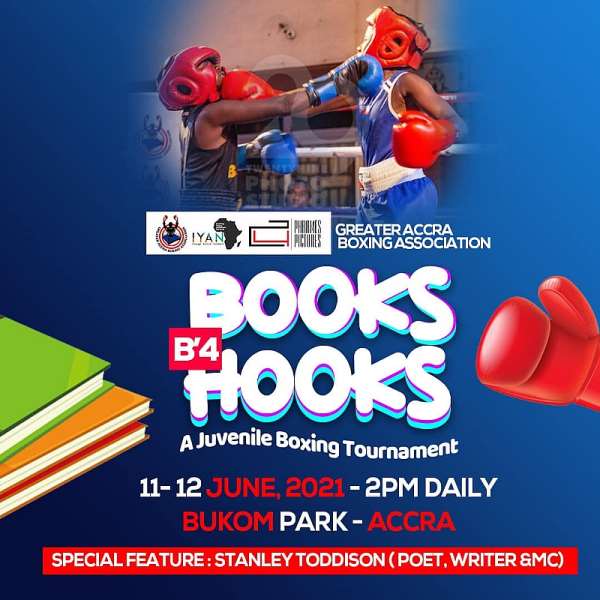 The tourney is for juvenile and new amateur boxers between the ages of 8 and 16 years from various boxing gyms in the region to display their skill and talent.

The spokesperson of the GAABA, Miss Sarah Lotus Asare said are on a positive path on putting Ghana back to its position in boxing with the recent activities undertaken by the Association.

She hinted that Mr Stanley Toddison will hold a workshop on public speaking for the boxers, and three special awards will be given out for Best in Sportsmanship, Boxer of the Tournament and Best Participating Club.

Secretary of the Association, Mr Alex Ntiamoah-Boakye also said the nation cannot produce good boxers without getting them on a sound foundation.

He expressed that “we can't develop these young boxers in the sport without giving them good education and that is why the tournament is named ‘Books before Hooks’.

"The Association want to groom future champions who are very good technically, academically and cultured, so this competition will feature young boxers who are in school" Ntiamoah-Boakye informed.

He encouraged the trainers from the various gyms to admit and train children who are in school only.

The Association has already held two events aimed at growing amateur boxing and getting boxers equipped for the sport.

On April 24, the Association held the ‘Girl Box’ event involving only female boxers at the forecourt of Ga Mashie Development Agency (GAMADA) to encourage girls to take up boxing to keep them away from teenage pregnancy and later on May 15 hosted a workshop to equip the boxers and coaches.

Meanwhile, the Ghana Amateur Boxing Federation (GABF) will also inaugurate the national juvenile and youth teams on Friday morning at the Accra Sports Stadium, and do some exhibition at the Bukom Square to support the GAABA programme.