Meet the 10 hottest female football referees in the world 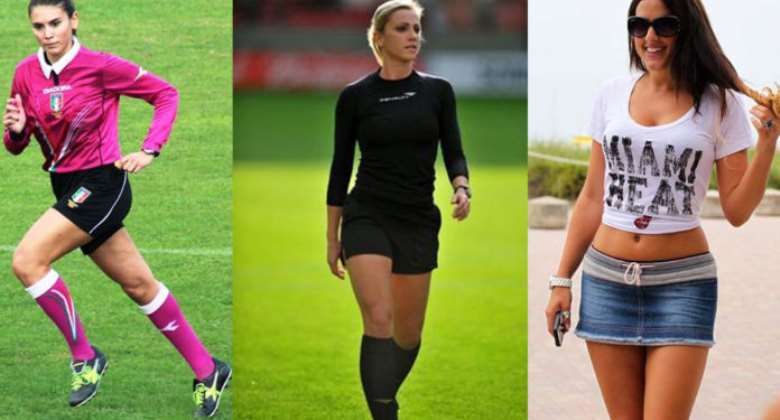 Football referees play a vital role in a football match. The referees not only controls the flow of the match but also enforce the Laws of the Game.

In recent times female football referees got the attention of everyone for their awesome looks.

In dummysports.com we selected the hottest female football referees and ranked them in this top 10 list.

Another Brazilian on our list, Fernanda is a 28-year-old assistant referee in Campeonato Brasileiro Série A.

She has become an internet sensation with her model-like looks and her strength in a male-dominated industry. She is active and has immense knowledge about the game.

She once claimed that her goal was to work at the highest level in Brazil.

While the beauty of the game of soccer usually takes place between the lines, not running up and down them, one Brazilian is starting to draw eyes away from the action on the field.

Claudia Romani is a 35-year-old model and was regarded as the world’s sexiest referee. She is qualified to umpire fixtures in Italy’s Serie A and Serie B.

Claudia is originally a model but has shot to stardom across the world since becoming a referee.

she was voted as one of the 100 Sexiest Women on the Earth.

The Italian model-turned-referee has become an Instagram hit after posting a series of selfies and bikini pictures.

Aurélie Sarà Bollier is a 27-year-old professional referee in Switzerland, she is a full-time referee in (Swiss amateur leagues) and hopeful to make her career prominent. She gets a huge fan following due to her pretty looks.

Aurélie recently told Blick that “I will never referee a professional game”.

Elena Tambani is a model and full-time football referees minor football leagues in Italy. She gets attention while doing her job as the official in the football match.

She is the referee in Italian Leagues and was officiated in Serie A, Italy’s equivalent of the Premier League in Britain.

Many football fans consider her as the most beautiful female referee in the world.

Sian Massey is a 32-year-old assistant referee in English Premier League. She has been in charge of a number of matches in the FA Women’s Superleague.

Ellis was all over the media in 2013 when she got Manchester United defender Rafael sent off for kicking Chelsea’s David Luiz.

Katie-Louise Patterson is a 24-year-old commenced her refereeing career in the Illawarra before moving off to the St George Football Association then on to the NSW State League Football Referees Branch and has officiated in the NPL Women’s 1 competition as well as the Westfield W-League amongst other leagues.

Football NSW Referees Manager Kris Griffith-Jones was happy that Patterson was getting her chance to shine in NSW’s top tier football competition for men.

“Katie’s performed really well in the IGA NPL NSW Mens 1 Grade 20s competition and finished up in the top five of the Westfield W-League referees which were a great achievement.

She also thinks there is a long way to go before more women will be recognized in the sport and added there needed to be more support for all referees.

‘It’s important we look at women’s football in a way that says the women’s game is not the ceiling for women officials,’ Patterson said.

Meet 36-year-old Uruguayan Claudia Umpierrez who fought to get back to the top, and realise a dream.

For her, it has improved her fitness a lot and she has even taken a coach who helps her with strength and contioning. “I would love to see more women refereeing men’s football,” she says. She thinks back about the FIFA U-17 World Cup India 2017 for men, that she took part in with fellow referees.

Work, school, family time. It all takes so much time because they are important. But don’t forget time for training sessions. If you want to reach the top as a referee, you need to be very fit. That’s why Umpierrez got out of bed very early. When her child was still young, she got up and even did a training session after breast-feeding. Then off to work later on.

Wife Lucy was last month subjected to sickening Twitter threats, had abuse screamed through the letterbox of her home and received offensive texts following the online posting of her mobile number.

“I came off social media for two weeks and have now changed my settings so I won’t receive notifications unless it’s someone I am following.

The 28-year-old former college lecturer, a Level 3 referee, found herself occupying international headlines as the Italian fan-driven backlash fired off in scattergun manner.

And as she prepares for her family’s Wembley honour, the refusal to let the trolls triumph is inspiring.

Denise a 23-year-old model, has earned thousands of followers after she officiated a Brazilian amateur match in Sao Paulo between Desire and Spotting.

In that match, the assistant was boldly “loose” in the collection of thin white t-shirt, short shorts. Her hot beauty not only attracts soccer fans but also makes it hard for the players to focus on the game. Only after one match, the identity of Denise Bueno has been sought by men seeking fatigue on the internet.

Katalin Kulcsár has been appointed to a Women’s Champions League semi-final match, ahead of her heading out to France in June for the Women’s World Cup.

As she has already refereed a final previously, a semi-final appointment is the highest she can get and is a sign that she has had another great season.