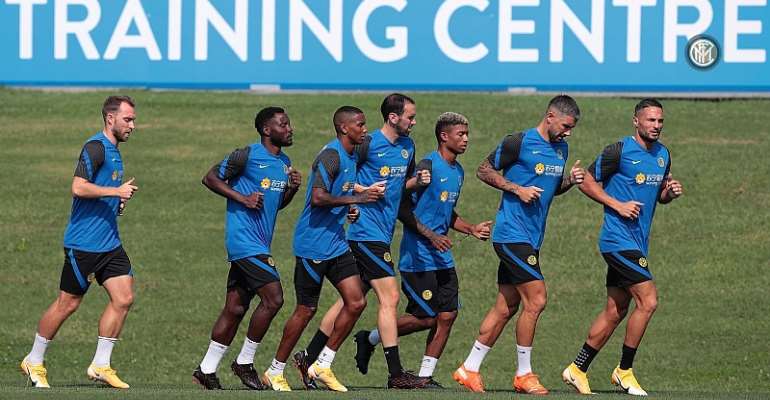 Ghana international Kwadwo Asamoah has intensified his pre-season training with Inter Milan in the midst of speculations linking him to an exit from the Italian club this summer.

The experienced left-wing-back joined the Nerazzurri club in 2018 having parted ways with Juventus after staying with the Old Lady for 6 years.

During last season, Kwadwo Asamoah had a good start to life under new boss Antonio Conte but as a result of injuries, he had to miss most parts of the campaign.

With the possibility of staying fit throughout the season not guaranteed, it has been reported that Inter Milan is ready to offload the versatile player.

In the ongoing summer transfer window, sources have reported that Kwadwo Asamoah is wanted by a few clubs in the Italian Serie A as well as the Turkish Super Lig.

In the midst of the reported interest, the Ghana defender is keeping his focus and continues to train hard with his Inter Milan teammates in pre-season.

With just 11 appearances in all competitions at the end of the 2019/2020 football season, Kwadwo Asamoah has been advised to make the move this summer to ensure he gets to play regularly this season.

It is however unclear whether he fancies a transfer away from Italy after spending most of his playing career in the European country.

It is understood that the 31-year old is being courted by Cagliari Calcio, Hellas Verona, as well as Galatasaray.

Check out Kwadwo Asamoah’s numbers at Inter Milan since joining the club from Juventus below: