Victor Gomes: Refereeing Is A Passion 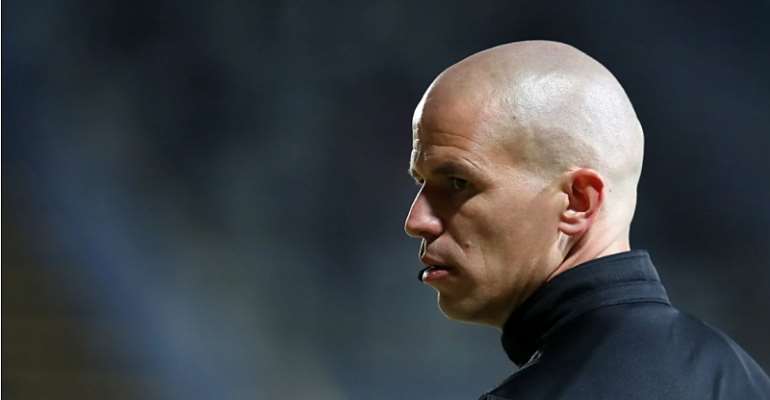 He is the kind of guy who would run around the field with a smile on his face and it is no coincidence. For South African referee Victor Gomes, refereeing is not a job, but a passion and a hobby, one which he has enjoyed doing since he was 14 years old.

“For me, this is not a job but it’s a passion and I am very passionate about it. I love refereeing and it makes it very easy for me. It is a lifetime commitment,” Gomes says, speaking to CAFOnline.

The 37-year old has been a FIFA/CAF Elite Referee for the last nine years, and it has been a journey of resilience, hard work and commitment, seeing him officiate slightly more than 250 top-flight matches.

"To be honest, I wasn’t really a good player. I used to love refereeing and at times, I would beg my coach to let me referee" -Victor Gomes

Just like every budding young man growing up, Gomes, who was born to Portuguese parents in South Africa was an ardent football lover. His brothers played football while his father who comes from the football-mad Portuguese island of Madeira absolutely loved the beautiful game.

“I used to play football for a local team in the regional FA as a right-back but to be honest, I wasn’t really a good player. I used to love refereeing and at times, I would beg my coach to let me referee and that’s when I realized refereeing was in my blood,” Gomes narrates.

The passion was catalysed in 1998 as he watched the FIFA World Cup in France. While everyone else concentrated on seeing the players showcase their magnificent talent, Gomes was looking elsewhere; it was the men in the middle and those running the lines that excited him the most.

“I was really excited by that and I contacted the local FA to ask how I could get involved and that’s how I started. I did level one and two as a start then I was given some games as an assistant referee. As I progressed, I did more games and courses and progressed over the years,” Gomes says.

He kept his eyes on the prize, working hard and impressing at every match and at the age of 28 in 2011, he was handed the topmost recognition, the FIFA/CAF badge.

This is in addition of many other matches in the South African top-flight as well as AFCON and World Cup qualifiers in the continent.

“It has been a very interesting journey and I am really happy with how things have gone for me. I am grateful for the people who have supported me to be here today,” Gomes says.

The father of two admits it has not been a bed of roses trying to balance everything around his life. Apart from being a top African referee and a family man, Gomes also runs businesses in South Africa. He owns a plastic manufacturing company as well as a water processing plant.

All this he says takes so much of his time and most often, counts himself lucky if he finds some bit of time to rest and have a social life.

“It is definitely not easy but I am happy because I am blessed with a very good support structure. I have family, friends and workmates who play an important role in supporting me. If you are to succeed you must have a very good foundation,” he explains.

“In my business, I have a partner who does things when I am not around and also thanks to technology, you can always make things move when you are not around. With refereeing comes a lot of travelling and you are away for so much time, but having people to support you is important,” further adds Gomes.

He says what has stood for him in striking a neat balance between all three is discipline and proper time management. He explains that he has had to train at night sometimes just to ensure everything around him runs seamlessly. His wife, he says, has been a core part of his career.

“I would not be where I am today if it was not for the support of my family. My wife has been my pillar of strength and my best critic. She watches all my matches and if I falter, she is always the first to tell me ‘hey my friend, you need to pick up your socks’. She has been supportive,” notes Gomes.

The 37-year old was for some weeks away from his family, when he remained in the Premier Soccer League (PSL) bio-secure bubble as the South African top tier run its final lap after the four-month stoppage caused by the COVID-19 pandemic.

Gomes says he is relieved to finally get back on the pitch and hopes life in the norm will return soonest possible.

“It has been a tough period for everyone who loves football. I am pleased that we can finally get back but under very strict protocols to finish the season. It is a new experience but loving it so far. The only thing is we need to unite as a people and ensure we defeat this invincible enemy,” he notes.

Gomes who has been selected into the wider pool of referees ahead of the 2022 FIFA World Cup in Qatar, hopes he can earn a final selection and fulfil one of the dreams he had as a kid, back in 1998 when he watched the fiesta in France.

“Everyone aspires to get to the top and the senior World Cup is the ultimate target. Just like players and coaches, playing at the World Cup is the dream and it is the same for us referees. That’s what I aspire to do and I will keep working hard, keep the focus and my feet on the ground,” Gomes notes.

He expects even more African referees to grace the world stage, noting there has been a massive improvement over the years because of the investment put in by CAF to uplift the level and knowledge among African match officials.

“We have very good refereeing structures and I am grateful to CAF for investing time, effort and money into refereeing. CAF has really invested in us and our director Eddy Maillet has assisted to transform refereeing in Africa.”

“We have improved a lot and the elite referees being produced out of the continent are doing very well,” he states.