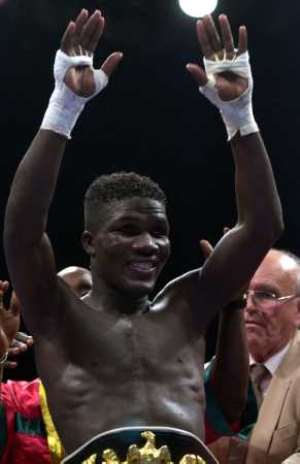 Every day, thousands of people from all over the world arrive on U.S. shores in search of fulfilling the American Dream. Such a practice is common among Ghanaian boxers, from the legendary Azumah Nelson to recent times where Richard Commey and Isaac Dogboe have established themselves on American soil.

Yet for some pugilists, the pursuit of the American Dream turned into a nightmare.

Ben ‘Wonder’ Tackie, Abraham Tetteh and Gideon Annor trekked from Ghana to the U.S. to further their professional careers. For one reason or another, their vision was a far cry from the reality they encountered.

Today, these former boxers work menial jobs in order to survive in the concrete jungle of the western world. Through it all, they are thankful for the opportunities the sweet science afforded them. Here are their stories, as told to BoxingAfrica.com:

Benjamin Tackie was born into a fishing family in Bukom, a province of capital city Accra with a rich fighting tradition. His father was a fisherman and mother, a fishmonger.

Tackie followed in his father’s footsteps, working on a fishing boat with his siblings.

“It was a very difficult upbringing for me from Bukom. I became a boxer to make money to feed my family, especially my mom,” Tackie told BoxingAfrica.com.

“I got interested in boxing when a boxer by the name of Isaac Tetteh rented an apartment in our house. I told him I wanted to train as a fighter and he took me to the gym.”

Tackie began training in 1991 with the late renowned trainer Emmanuel Teiko Tagoe, alias Coach Akese, at the Black Panther Gym in Accra. At Black Panther, he worked closely with future world champion Joshua Clottey and his brother, long-time contender Emmanuel Clottey–two boxers who became well-established in the US.

“I had only four amateur fights before turning professional in 1992,” Tagoe recalled. “I fought professionally for five years in Ghana and relocated to the US to make my debut there.”

Under the guidance of Ringcraft Promotions, Tackie arrived in the US in 1997 with fellow boxers Kofi Jantuah and James ‘Bukom Fire’ Armah. He won 11 of his next 13 bouts, including some thrilling KO’s that ultimately earned him a shot at world super lightweight champion and future Hall of Famer, Kostya Tszyu, in May 2002.

The champion defended his title with ease, outboxing the Ghanaian to earn a 12-round unanimous decision.

Tackie attributes the loss to Tszyu refusing to stand and trade but also says there were other forces that worked against him.

“I had so many distractions in the build-up to the fight and that really affected me. I started preparations in Ghana because I wanted my wife and four children to be at the fight. Getting them the visa delayed and that affected my plan. I left with only three weeks to the fight and I couldn’t get in good shape.”

Tackie never rose to those heights again, managing only seven wins in his next 17 fights before retiring in 2015.

“I had so many issues with my wife when she arrived with my kids in US. That really killed my career because I was not thinking straight in most of the fights.”

Tackie now works as a security personnel in New York. He remains grateful to boxing for changing his life.

“Most of my friends in Bukom became armed robbers and died in the process. Boxing saved my life and I will be forever grateful for that.

“Upcoming fighters have a chance to reach greater heights. Coming to the US is good because it provides you with so many opportunities as a boxer. But it doesn’t guarantee success.”

Abraham Tetteh discovered boxing through his uncle, Oblitey Commey, who was a boxer in the early 80’s.

An eight-year-old Tetteh started visiting the Attoh Quarshie Gym in Accra with his cousins Percy Commey and the late Oblitei Commey to watch his uncle train.

Tetteh was a sportsman. He trained as a footballer and in martial arts at the same time he learned to box.

“My parents weren’t happy about my decision to become a boxer because I was very young at the time.”

By age 14, he was one of the hottest amateur prospects in the country, with the Ghana National Fire Service (GNFS) looking to add him to their team.

Tetteh said he passed on the opportunity because his parents said he was too young to join the GNFS.

I remember we were in camp for an amateur championship outside but I was replaced with some weeks to the competition. I nearly lost interest in boxing after the incident in 1987.”

It took the intervention of coach Teddy Lamptey for him to return to training, who advised him to turn professional. He did in 1993, around the same time he met future world champion Ike Quartey.

“I started traveling with Ike Quartey for fights. I was his trusted sparring partner and that really gave me prominence.”

Tetteh faced Kofi Jantuah in 1996 in one of his toughest fights. Unfortunately, the fight couldn’t provide any winner because chaos broke out and the bout was stopped.

Whilst Jantuah felt supporters of his opponent stopped the fight because he was winning, Tetteh thought otherwise.

“He was continuously giving me low blows and the referee didn’t do anything about it. Then the supporters got furious and started throwing chairs into the ring.”

Tetteh relocated to the US after the fight and signed with renowned boxing manager Stan Hoffman. However, his career trajectory began trending down following consecutive eye surgeries.

Tetteh had to quit the sport upon advice from doctors. He currently works as a security personnel at the Columbia Presbyterian Hospital in New York.

“I went into coaching when I stopped fighting and I still do when I’m hired by fighters for bouts. Boxing has done a lot for me because it took me places and made me who I am today,” Tetteh said.

Gideon Annor comes from a fighting background. His brother Annor Amissah and cousin Ashia Laryea were both boxers.

Growing up in Bukom, Annor used to visit the Wisdom Boxing Club with his elder brother Amissah and Laryea. This grew his love for the sport.

“I used to hold their kits for them whenever they were going to train,” Annor said. “I remember coach Ofori Asare asking me to try learning the sport so I gave it a try.”

He commenced training under Asare in 1988 after completing high school. His expressive performances landed him a job with the GNFS where he worked until relocating to the US.

In 1996, Annor became a professional. In 2001, in his last bout in Ghana before leaving for the US, he defeated the late Alfred Kotey.

“I wanted to come to the US to build on my career so when the opportunity came I took it. I had to resign from my job at the Fire Service so I could make the trip.

“When I got to New York, I struggled to get fights and I decided to work to earn a living.”

Currently Annor works at a fitness center in New York assisting customers at the gym.

“It’s good to come to US to fight but the most important thing is to get good managers and promoters to propel your career just as Azumah Nelson and Ike Quartey got,” said Annor.

“I didn’t get that here when I came and that destroyed my career. I think there are so many things to be fixed in Ghana boxing to help fighters make it big.”