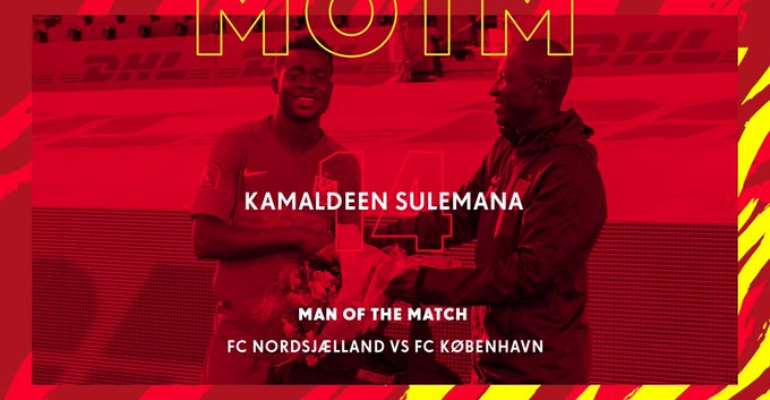 FC Nordsjaelland teenager Kamaldeen Sulemana has been named as the ‘Man of the Match in the team’s 1-1 draw against FC Copenhagen in the Danish Superliga this evening.

The two top-flight clubs in Denmark went head to head at the Right to Dream Park today to battle for 3 points in the quest to finish high on the standings of the division.

Following a good performance in the first half, FC Copenhagen who played as the away team took the lead through Jens Stage on the 22nd with an assist from Pep Mas.

Though the home team had their moments, they could not draw parity and had to go into the break trailing.

In the second half, Kamaldeen Sulemana climbed off the bench to replace compatriot Isaac Atanga and ended up pulling level for FC Nordsjaelland on the 67th minute.

Besides the equalizer, the inputs of the 18-year-old underlined by his direct attacking plays proved crucial for the host as they earned a point at the end of the match.

Due to Kamaldeen Sulemana's impressive displays, he has been adjudged as the ‘Man of the Match’, his second after football returned after the Coronavirus (Covid-19) break.

Since joining FC Nordsjaelland in February 2020, the teenager has made 5 appearances and has managed to chip in with 2 important goals as well.