FEATURE: Eric Bekoe: The Kotoko Kingpin Who Left After One Season 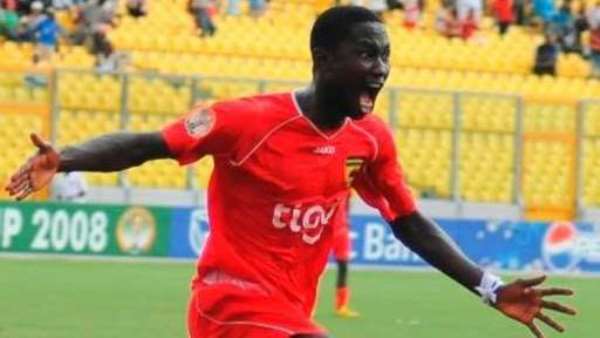 It has been another week of talk-talk about a former player who was incredibly good in the Ghana Premier League for every team he played for. Liberty, Heart of Lions, Asante Kotoko. He was an all-rounder. Goals with the head, left foot, right foot, a sense of where the goal was and had the composure of an experienced driver whenever he neared it.

Everyone who watched him religiously knew the sort of player he was and revered him accordingly. So in the past few days when Eric Bekoe proclaimed that the great Mohamed Salah looked up to him while he was a stalwart at Egyptian side Petrojet FC, I did not have any doubts.

I know him and appreciate his quality but he was mocked on social media extensively.

“I was a big player in Egypt. Mohammed Salah and other young Egyptian players wanted to be like me,” he said calmly in a local radio interview.

“Mohammed Salah of Liverpool picked me as a role model. During my days at FC Petrojet, Salah was a young boy playing for the youth side of Al Mokawloon who trained with Petrojet.

“Salah was a left-winger who wanted to score more goals because he is clinical upfront. He sometimes cried because his efforts on the wings doesn’t result in goals.”

The fact that Bekoe remembers clearly who Salah was was quite telling of how much of a good player Salah was back then and how observant Bekoe is. All of it is quite evident in the sort of player he showed us when he was in the Ghana Premier League.

There are those who think of Eric Bekoe as a one-season wonder in the Ghana Premier League but his statistics, goal-scoring exploits betray that line of thinking.

Bekoe started as a youngster at colts club Antwerp FC in Dzorwulu. There, he tells me, he learnt his craft and is ever grateful to his mentors for making him what he became.

“I loved it there. It was a tough process getting through. There were too many of us and I was always determined to make it,” he recounted.

The leap from that team though to the grand premier league football stage via Tudu Mighty Jets is what baffles many. Not many have had the luxury of moving through the ranks so quickly in football. But he did it in a way that pleased many.

Bekoe’s statistics in the Ghana Premier League as a goal scorer makes for happy reading.

He scored 14 goals in 26 games for Dansoman-based Liberty Professionals, 20 in 26 for Heart of Lions in Kpando, 9 in 16 games for Berekum Chelsea, 4 goals in 12 games for the Black Stars but it was at Kotoko, the club he supported as a boy, that he made his name with 42 goals in 48 games.

“Kotoko is the university of Ghana football and it was a dream come true for me to rep the jersey of Asante Kotoko because I have been a fan of the club since I realized what football is.” He let out a big guffaw just after he said this and continued.

“So I was a fan of the game and then a fan of the team as well whereby I was paying my dues as a fan. I used to go for Kotoko circles meeting way back in Maamobi and all that. So when I had the privilege to rep the jersey, it was an unfinished business I was about to take on so it was a dream come true for me to play for Asante Kotoko.”

That season in 2007, Bekoe was the toast of Ghana football and key component of the Kotoko team that went on to win the league.

In the league, he banged 17 goals in 22 games and scored an additional 10 in 12 in the CAF Champions League.

Kotoko couldn’t make it out of the group that year – finishing last with 7 points in a group that had Etoile du Sahel, Al Merreikh and JS Kabylie.

That experience rings deep in the memory of many and Bekoe himself still remembers every detail.

“It has been memorable because I have left a big legacy and being a legend of the club doesn’t mean that you need to stay with the club for so many years but the footprints that you will leave, the stain that you leave on the white cloth is what matters. Though I played Kotoko for just a season, I was rated 25 among all goalscorers in the world which I think was a remarkable achievement during my time at the club,” he bragged.

Bekoe’s one season at Kotoko felt like many years. He was brilliant. He scored all types of goals – tap-ins, headers, long rangers, everything.

His repertoire from that year looks like a video reel from Puskas or better yet, Muller. Goal galore.

His time at the club coincided with an era of a brilliant crop of players in the porcine fold.

“At Kotoko, I had the chance to play with legends. Somebody like Emmanuel Osei Kuffour, Nana Arhin Duah, Stephen Oduro, Godfred Yeboah. It has always been a glorious moment.”

Bekoe recounts the Hearts vs Kotoko game that year as one of his most memorable games. A game that means a lot to Ghanaian football fans and defined Bekoe’s career in a way.

He recounted how difficult it was for him even after the game had ended. Dan Coleman was the king of hardmen in the league then and Bekoe got his share of the battering.

“It was a historic moment when we played Hearts of Oak in Accra, one banner read, ‘Naa Bekoe, naa Coleman’. My jersey was torn and then after we were travelling back to Kumasi I collapsed on the way due to stress. That has been a memorable day in Ghana football.”

Kotoko is one of the biggest clubs in Ghana and for 85 years, the club has stood for excellence and grandeur in the Ghanaian game.

They have been a model club for many in the years past and though they have had a ton of problems at the top over the years there are still many who would lay their heads on the chopping board for them.

The club in weeks past had been in the news for issues related to how management had failed them.

The last few years have been trying times for Kotoko. Not won the league in while, not cutting it at the top in Africa as well. But for the FA cup win against Hearts in 2017, it would’ve been a barren period for the Kumasi faithfuls.

“Kotoko used to be a club of trophies but things are not working now to be bring those trophies back. Even the selection of a coach is not done properly these days,” he said.

Bekoe has always been the one to say what his on his mind. A very vociferous character and he claims the rot ingrained in people who are called to lead the club and unity is one thing they all lack.

“There is not that oneness again. There has been a division whereby, when a certain Kotoko management is in power, the are a circle of fans that’s against them. No matter the grievances, no matter the misunderstandings, we should know that Kotoko is paramount. Kotoko should be our first priority that we need to worship and cherish. If we do not do that way and different circles keep supporting different managements or bring an agenda of supporting a certain management, it will kill the team and Kotoko will lose,” he bemoaned.

Kotoko instituted a nine-member board days ago to man the affairs of the club. When I asked Bekoe what he made of them, he looked rattled for a bit before he said: “It is not easy to have an opportunity to serve Krobea because this is the team of King Solomon. The man who decides and never goes back on whatever decision he makes. I am talking about Otumfuo Osei Tutu II. So if he gives you that opportunity to serve, you need to serve well. You need to be dedicated, you need to persevere and make a mark for yourself.”

Bekoe’s wish is to see Kotoko big again on all fronts.

Winners of the big trophies and conquerors of Africa. Now nearing the twilight of a career that has produced so many goals, he wants to impart on younger footballers.

He feels Ghana’s striking woes can be fixed if players are trained in the role from childhood.

Bekoe’s one season at Kotoko in the Ghana Premier League will go down as one of the best ever for a player and it is the reason many have noted him as a one-season wonder in the League.

If you need further proof of how good he was, watch his goal for Kotoko against Zaytuna in that season.

Come carry Mahama’s E-block away if you won’t open it and gi...
42 minutes ago