I Will Advise My Son To Kick Against Playing For Ghana, Says Former U-17 Captain Sebastian Barnes 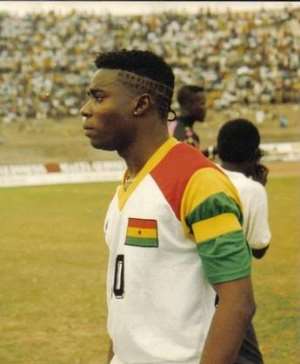 Former Ghana U-17 captain, Sebastian Barnes has emphatically revealed that he will advise his son to snub Ghana and play for Germany.

The former Accra Hearts of Oak midfielder has been bitter about how he has been ignored by Ghana Football despite availing himself to serve.

In an interview on Sikka FM, the former U-17 World Cup winner has courted more controversy when quizzed on issues about his life and family.

He revealed that he has a son who’s into football but will discourage him from playing for Ghana.

“I have a son who currently plays for Schalke 04 U-19, I will advise him to play for Germany instead of Ghana due to my bitter experience playing for the national team”, Barnes said.

“I don’t want my son to replicate the same mistake I made years ago playing for Ghana” he concluded.

Barnes began his career with Hearts of Oak before playing for top-level German teams Bayer 04 Leverkusen and FSV Mainz 05.

In 1997, Barnes played for the Orlando Sundogs in the USISL A-League.

After leaving Mainz in 1998, Barnes played for a number of lower league German clubs, including VfL Hamm/Sieg and SF Neitersen.