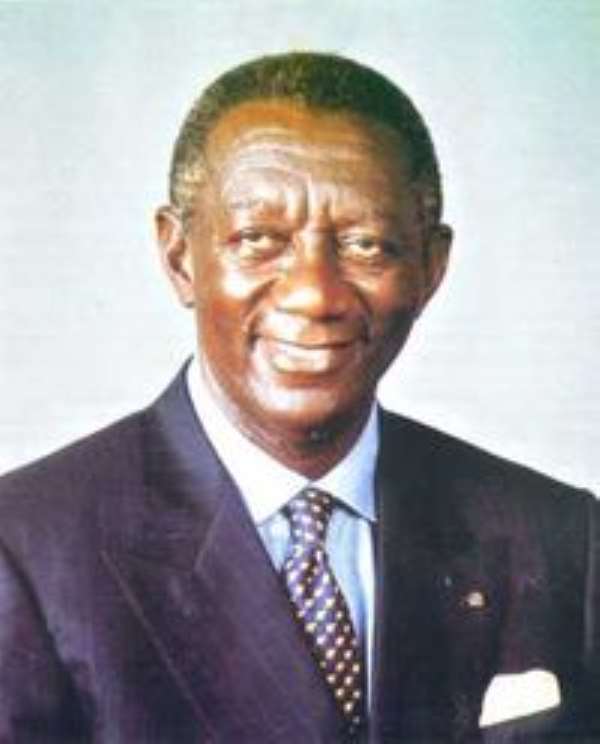 John Agyekum Kufuor's victory in the presidential ballot in December 2000 marked the first real transfer of power through elections in Ghana.

Born in 1938, Kufuor is a devout Roman Catholic. A lawyer who studied at Oxford, he held positions as Deputy Foreign Minister and as Secretary for Local Government where he initiated the policy that formed the basis of the country's present decentralised district assemblies.

Known as the "Gentle Giant", Kufuor, however, is said to lack the common touch of his predecessor, Jerry Rawlings. John Agyekum Kufuor, 61, has succeeded in second shot at the presidency after losing to outgoing President Jerry Rawlings in 1996.
Since his nomination as the New Patriotic Party's (NPP) candidate two years ago, Mr Kufuor has beaten paths into the remote countryside, pressing the flesh of folks and drinking from their water-pots in an effort to break the NDC's rural stranglehold and reverse his party's urban/bourgeois image.

However, the NPP lacked logistics and money to pay for media advertising campaigns, and Mr Kufuor is unconvincing as a public speaker. Mr Kufuor studied Law at Oxford University and became an MP and Deputy Foreign Minister in 1969 at the age of 30.

After a lull in his political career following the military coup of 1972, he returned to parliament in 1979.

After the 31 December 1981 coup d'etat led by Jerry Rawlings, he served as Secretary for Local Government, but resigned seven months later to pursue business interests.

While a lot of night-oil has gone into the NPP's manifesto of prescriptions for the ailing economy and social sectors, it was largely based on pledges, and plays on hope.

Nevertheless, Mr Kufuor has the goodwill and support of throngs of loyal party supporters, as well as many Ghanaians who simply want a clean break from the Rawlings era.

This was enough to see him emerge the strongest candidate in the first round of voting.

In the second round, the endorsement of the five opposition candidates who had been eliminated in the first round made Mr Kufuor's lead even more decisive.