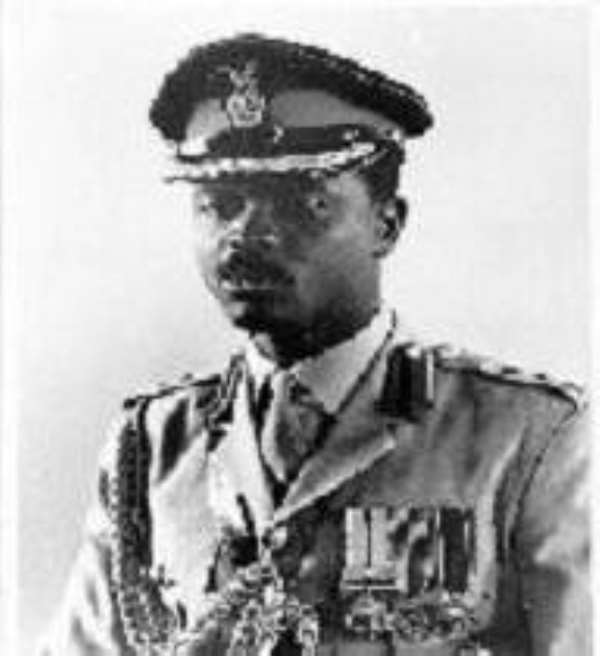 Okatakyie Akwasi Amankwaa Afrifa (1936 - 1979) was a Ghanaian general and political figure. He was the head of state of Ghana between 1969 and 1970. Gen. Afrifa, together with former Head of State Gen. Acheamphong and then head of state Gen. Akuffo and five other Generals (Utuka, Felli, Boakye, Kotei, Amedume), was executed by firing squad in June 1979 in the heat of the June 4 revolution. He was born in Asante Mampong. He attended the local Presbyterian School and moved on to The Adisadel Secondary School in Cape Coast where he excelled and was ironically presented scholarlistic prizes by Dr Nkrumah who he later overthrew. The title "Okatakyie" was bestowed on Afrifa by the late Asantehene Opoku Ware as a recognitions of his bravery in helping rid Ghana of a "Tyrant" as Nkrumah was perceived then. Okatakyie Afrifa was in his time instrumental in raising funds to rebuild the entire village of Krobo, which is a few miles from Asante Mampong. Krobo was the birthplace of both his parent, Opanin Kwaku Amankwaa and Madam Ayewa. At the time of his untimely political murder, together with 9 other military officers, Okatakyie was an elected member of Parliament in the 1979 General Elections for the Mampong constituency. Okatakyie Afrifa had a premonition of his death when in 1976 or thereabouts, he wrote a prophetic letter to the then Head of State Genaral Acheampong advising him to stop corruption and indiscipline in the army otherwise "We will all be lined up and shot". His reward was a few months in jail and long house arrests and then sure enough, Acheampong and Okatakyie together with Akuffo and others were all lined up and shot by Flt Lt Rawlings in 1979. At the time of their execution, Ghanaians were made to understand that they had been punished for overthrowing constitutionally elected Governments of Ghana but, it has now become clear as a result of the National Reconcilliation Committee set up by the Kuffour Administration that Okatakyie and the other 9 Army Officers were NOT TRIED legally and thus considered MURDERED to satitsfy junior officers and the other ranks of the Ghana Army who were baying for BLOOD TO FLOW. Ironically enough, Flt Lt Rawlings who orchestrated the executions of Afrifa for reasons that he overthrew a constitutionally elected government, himself overthrew a constituitonally elected government about a 2 years later. Okatakyie was married at the time of his execution to Mrs Chritie Afrifa and had about 7 children including those he had before his marriage.

Afrifa once famously said "A coup is like having sex: The first time, you're nervous. After that, it's easy and fun."

'Get rich quick' attitude among the youth eroding moral fabr...
36 minutes ago