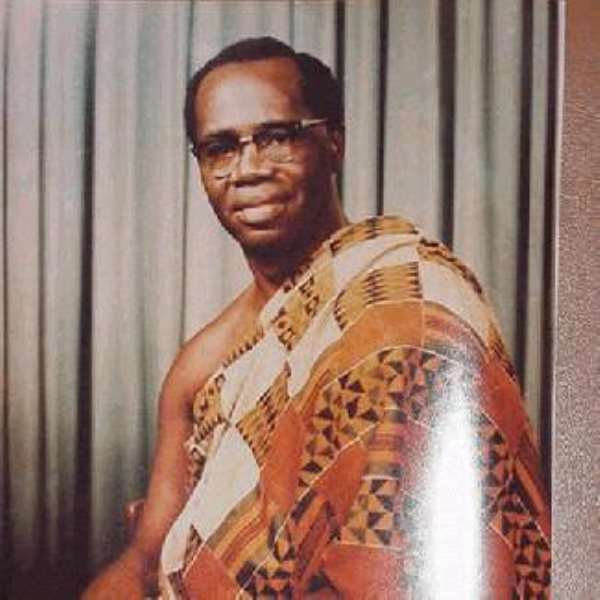 Kofi Abrefa Busia (11 July 1913 - 28 August 1978) was Prime Minister of Ghana from 1969-72. He was born in Wenchi, in the then British colony of Gold Coast (now called Ghana). He was educated at Methodist School, Wenchi, Mfantsipim School, Cape Coast, then at Wesley College, Kumasi from 1931-32. He later became a teacher at Achimota Secondary School. He gained his first degree with Honours in Medieval and Modern History from the University of London, through correspondence during this period. He gained BA (Hons) at Oxford University in Politics, Philosophy & Economics; MA. Ph.D.Social Anthropology.

He served as a district commissioner from 1942 to 1949, and was appointed first lecturer in African Studies. He became the first African to occupy a Chair at the University of Gold Coast. In 1951 he was elected by the Ashanti Confederacy to the Legislative Council. In 1952 he was Leader of Ghana Congress Party which later merged with the other opposition parties to form the United Party (UP).

As leader of the opposition against Nkrumah, he fled the country on the grounds that his life was under threat. He later became a Professor of Sociology and Culture at the University of Leiden in the Hague, Netherlands.

He returned to Ghana in March 1966 after Kwame Nrumah's government was overthrown by the military, and was appointed as the Chairman of the National Advisory Committee of the NLC. In 1967/1968 he served as the Chairman of the Centre for Civic Education. He used this opportunity and sold himself as the next Leader. He also was a Member of the Constitutional Review Committee. When the NLC lifted the ban on politics, Busia, together with friends in the defunct UP formed the Progress Party (PP).

In 1969, PP won the parliamentary elections with 104 of the 105 seats contested. This paved the way for him to become the next Prime Minister. Busia continued with NLC's anti-Nkrumaist stance and adopted a liberalised economic system. There was a mass deportation of half a million of Nigerian citizens from Ghana, and a 44 percent devaluation of the cedi in 1971 which met with a lot of resistance from the public.

While in Britain for a medical check-up, the army under Colonel Ignatius Kutu Acheampong overthrew his government on January 13, 1972. He died from a heart attack in 1978.