I was harassed sexually — Bukola Awoyemi 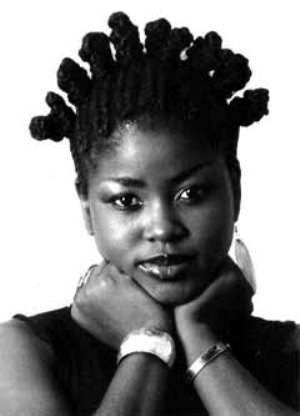 To most movie bluffs, her name strikes a strange chord to their ears, but to many others, she is simply a promising talent to watch. Bukola Awoyemi Grace is not one of the celebrated names in Nollywood today, but she certainly possesses all it takes to stand the taste of time in the movie industry in the country.

Four years ago, while as an undergraduate at the University of Ilorin, she opted to pursue a career in acting. No sooner she left the ivory tower than she made good her intention to go for her first love. But it was not to be an easy journey for her. With frustration, disappointments and incessant temptations starring her in the face, coupled with insatiable urge on the part of the male movie producers to feast on her body, Bukola remained undeterred in her desire to make her impact felt in the movie industry.

“In all of these, I remained resolved to pursue my acting career.”she asserted.

Today, having featured in such films as “Poisonous Affairs”, where she played sub-lead with Desmond Elliot, “Church On Fire”, “Akpochereogu”, “Ire Okunkun”, and now, Tunde Kelani's latest film, 'Arugba”, the Kwara State born rising actress can certainly claim to have launched herself into the mainstream acting world.

Her journey into the world of make-believe, according to her, was punctuated with intrigues. Intrigues because rather than entrusting her with challenging roles, she was confronted with a situation, where the movie producers themselves were all out to take advantage of her beauty to quench their sexual urges.

She recalled a situation, where she was billed to feature in a film in her early days in the industry, only for her to be dropped thereafter. Reason; she could not submit herself to the producer of the film, who according to her, wanted to sleep with her.

“There was a time, I was to feature in a film. We had finished negotiating for the fee, and it only remained for me to go get my script and then, start working. Suddenly I got a call terminating the deal. What happened was that the producer was somehow interested in me, and wanted to take me to bed before the role would be given to me.

And since I wasn't ready to sale my body I lost the role” Bukola recounted, even as she vowed that, she would never take the path of exchanging her body in order to be signed on in a movie .

“Never. If I have to get featured in any film, it should be based on my ability to deliver and not to trade with my body in order to be given a role to play.”

Against the common practice among Nollywood actresses, where majority of them are frequently accused of sleeping their way to the top, 21 year old Bukola, condemned such unholy act, describing it as “a slight on womanhood, adding that “it only amount to ruining down someone's career and reputation, should one decide to throw decency to the wind, and sleep her way to the top.”

Decribeable as “a combination of beauty and brain”, Bukola is one of the emerging actresses who has a lot of potentials to showcase. As she narrates her story, a sparkle of innocence and sincerity was inevitably written all over her. She wouldn't want to talk about her plans for settling down, but simply replies,

“I have been a victim of sexual harassement in the past, but I did not fall. Thank God, I am saying it openly. I wouldn't just loose my pride as a woman because I wanted to feature in a film. I would rather remain myself.”

Playing the role of a virgin girl who bears objects of worship for a particular god or goddess in Tunde Kelani's latest film, “Arugba” is all that Bukola needed to launch herself into the mainstream movie world.

The film, inspired by a documentary that Mainframes had earlier done on the Osun Osogbo's Arugba, encapsulate the story of a modern day heroine leading a procession . Featuring in the film serves as Bukola's launching pad to fame.

The Arugba, who hail from Kwara State and graduated from the University of Ilorin had been part of Mianframe's audition before, but, “I was not considered professionally good enough to play any lead role then.”

Now, having mastered the craft, Bukola have developed beautifully to match any role she is compelled to play.

“Right from when I was in school, I had wanted to work with Tunde Kelani. I had gone for several audition in Mainframe, without success. But after my youth service year in Lagos, I went back to Mainframe.

Fortunately for me, Kelani was searching for a female character to play the role of Arugba. Immediately, I was auditioned and considered fit to assume the role. But before then, I have been going for auditioning at the National Theatre to no avail.”

“Although, I have featured in several films in the past, playing the lead character in Arugba is like opening the floodgate of opportunity for me. I do not want to stop here. I want to be known as a great star in future”21 year old Bukola enthused.

Interestingly, the ebony black complexion actress was not destined to play the role of Arugba, but when nature played pranks on Kelani, the CEO of Mainframes Productions, who came looking for Bukola, after the first two popular stars he wanted to use for the job, the sensational talking drummer, Ara, and acclaimed actress, Omotola Jolade-Ekeinde were knocked out by pregnancy.

AUnilorin graduate of Performing Arts, Bukola said, while she was growing up as a child, she knew she was going to take up acting as a career. “Before I got admitted to study Performing Arts, I had already made up my mind to pursue a career in acting.”Bukola narrated, adding that, “during my days in the university, I used to go on stage to perform.”

Even though, she claimed to have gotten the needed talent to excel in her chosen profession, Bukola who wanted to study Mass Communication, but ending up studying Performing Arts believed in working with the right person to be able to make the desired impact on Nollywood.

“ I just needed to horn my talent . I used to act, while I was in primary school. I knew I was going to become an actress someday. I want to be known as a great star.” For her, acting is an integral part of life.