By Nollywood Gists
Spirit of Naija 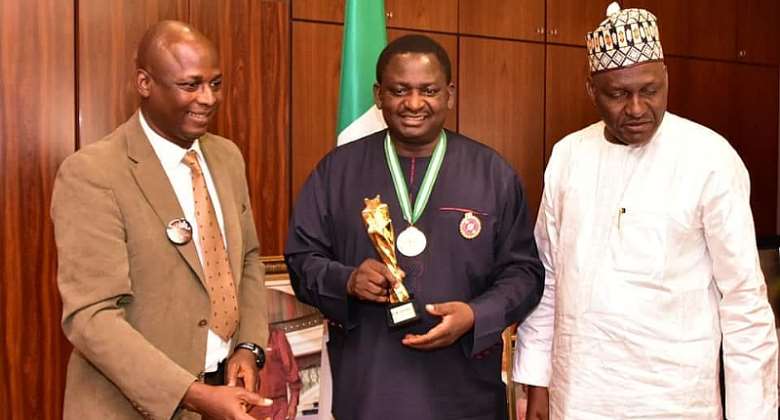 In view of the recent campaign against the challenges surrounding rape and how it affects young Nigerian girls, their future and the entire socioeconomic development of Nigeria, an Anti-Rape Campaign initiative tagged Campaign Against Rape and Sexual Abuse, has decorated Mr. Femi Adesina, the Media and Publicity Aide to President Muhammadu Buhari as an Ambassador of the Anti-Rape Campaign.

During the appointment, induction and inauguration of Mr. Femi Adesina as an ambassador of the anti rape campaign at the Presidential Villa in Aso Rock Abuja, the Federation of West Africa Freelance Journalist Association-FWAFJA, also presented the Award of West Africa Media Personality of the Year to the SA Media/Publicity to the President.

According to Mr. Abayomi Runsewe, the Founder/Initiator, Anti-Rape Initiative Nigeria and Worldwide and President of FWAFJA, he congratulated Femi Adesina for the honour and ambassadorial appointment in the campaign against rape and sexual abuse in Africa.

The event was organized by Federation of West African Freelance Journalist Association few day ago. During the decoration, Mr. Femi Adesina appreciated the organizers of the anti rape campaign and thanked the Organizers for the appointment, honour and recognition.

The Federation of West Africa. Freelance Journalist Association-FWAFJA has continued to champion projects, initiatives, policy formalution constitutional adjustments to promote fights against rape and sexual abuse in Africa. With this endorsement and appointment of Demi Adesina the campaign in Nigeria may have taken a new direction towards progressive developments.