My Wife Helped Me Achieve This Far……….Comedian, Okey Bakassi 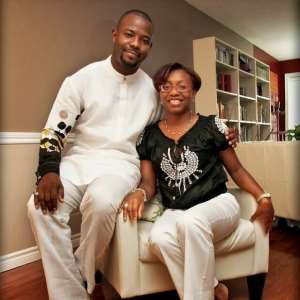 Ace comedian, Okey Bakassi, has revealed that his source of wealth and inspiration has been his wife Zizi whom he has married for the past 13years.

Recall that the couple celebrated their 13 years anniversary on Monday, 1st September 2014, and the comedian took to his social media page to send a message to his lovely wife which reads thus; “It is 13 years today that I have been married to my childhood sweetheart and best friend. We thank God for a productive and happy partnership. Happy anniversary my rib, Zizi, let's do another 13 years I love you more.”

Speaking about his wife, the Okey Bakassi explained that his wife has been very supportive and he would have not been so successful without her support.

He disclosed that to set the happiness in motion, he hopes to join his wife who is in Canada with the kids for holiday to celebrate her birthday which will be coming up on the 21st of September, 2014.