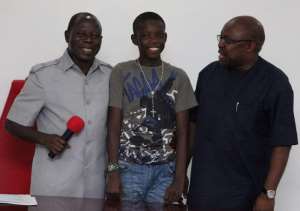 Stowaway Kid, Daniel Oikhena has been offered another scholarship, this time by the Edo State Governor, Governor Adams Oshiomole, to take charge of his education up to the highest heights.

In the statement, the governor said,

“Without meaning to encourage anyone else, we decided to support him by sending him to one of the top secondary schools in Edo State that is owned by the Government.

The reason for opting for a boarding school is that we think that there is need to closely watch him which his parents could not do. He is an intelligent young man with uncommon challenges, but one that has a vision.

We had him examined by people who should know and the result confirmed that he is normal."

Here is advising that the security in the aviation and every other sector be beefed up to avoid a similar incidence.

Sierra Leone Woman, Linda Ngaujah Takes a Visit to Heaven and Hell | Jesus Asks Her to Warn Pastor Adeboye and Pastor Kumuyi | Also Takes Back Messages From Gaddaffi and More (MUST WATCH)

Femi Fani-Kayode - 'AN ODE TO JEZEBEL

PHOTOS: Ngozi Ezeonu Flaunts Her New Slim Figure And She Is Insisting She's Not Sick