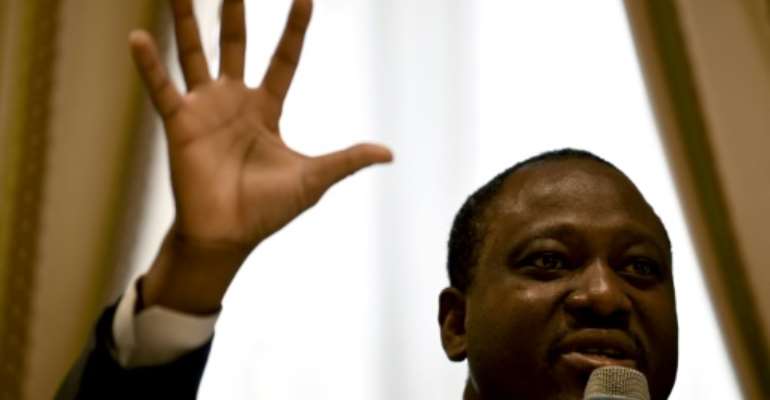 Former rebel leader and would-be Ivory Coast presidential candidate Guillaume Soro is a serious challenger to his erstwhile ally President Alassane Ouattara, whom he helped to power in 2010. By Lionel BONAVENTURE (AFP/File)

Soro, a former rebel leader and a candidate in presidential elections this October, currently lives in France.

Soro was accused of buying a house in Abidjan in 2007 with public money.

The Abidjan court on Tuesday fined him nearly seven million euros, ordered the confiscation of his Abidjan home and barred him from civic duties for five years.

It also issued a fresh arrest warrant for Soro, who is also the former parliament speaker and who is now effectively barred from contesting the election.

The African Court on Human and Peoples' Rights had recently ordered Ivory Coast to suspend an arrest warrant against Soro, who had taken his case to a Tanzania-based court last month.

Soro was also ordered to pay three million euros in damages and interest to the state.

Analysts viewed Soro as a serious challenger to his erstwhile ally President Alassane Ouattara, whom he helped to power in 2010 amid political violence which cost 3,000 lives.

Soro went on to serve as prime minister under Ouattara, then parliamentary speaker until last year.

But the two fell out progressively and Soro by last year harboured his own presidential ambitions.