All Is Set With Mesduah Production 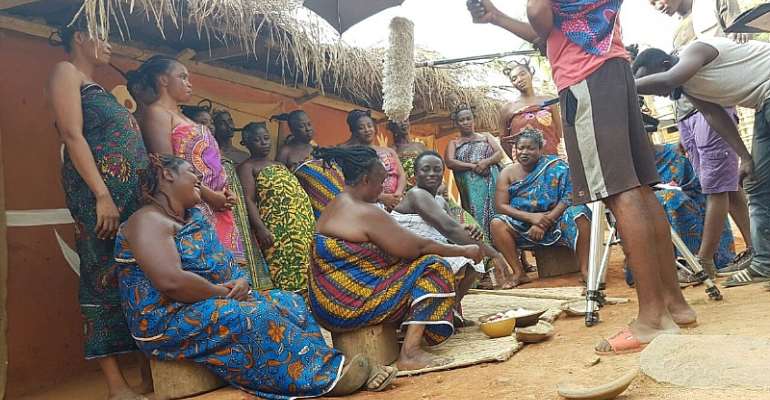 After watching only a few minutes of Mesduah Production’s series Ahintasɛm yesterday, I mean before Adom TV went for their first of a few set of commercial breaks, I exclaimed to myself; “everything is set now.”

I have been a keen audience of Mesduah Productions since last year, specifically since the broadcast of one of their series, Abuburo Kosua.

I was compelled to watch a little bit of Sankɔfa when my mother (a woman strongly against the influx of telenovela on Ghana’s screens) exhibited unprecedented interest in watching Adom TV. She wouldn’t stop explaining how important the film will be to Ghanaians, our culture, the Film industry and it’s perfect time of arrival.

The films are awesome. The production has an intriguing story, interesting setting, breathtaking visuals (oh how I love those drone shots) with great casting and characters. The plot, conflict, resolution, structure, scenes, sound, lightening among others are just great.

This is not like some of the Kumawood Films where the volume of the dialogue is lower and the soundtrack is always higher. The lighting for the night scenes are made to look natural and the dialogues are punctuated with lots of our Ghanaian proverbs. I am in love with Ghanaian proverbs now and have learnt a few thanks to Mesduah Productions. The dialogues have been consumed by proverbs. Sɛ adwen no anyɛ adwuma a, nipadua no berɛ – If the brain does not work, the human body suffers.

This week UK Prime Minister Boris Johnson cited the English version of popular Akan proverb “nsateaa nyinaa nyɛ pɛ” in his speech at the 2020 UK-Africa investment Summit and clearly stated that, “there is wisdom in these Akan Proverbs.”

I was very happy that the series made use of pure Akan dialects, Asante Twi and in the cases of some of the families represented in the film, some Fante. There was also a scene (the scene where people were sent out to look for missing Bediako who has unknowingly to them been killed by Serwaa) where a war song was chanted in the Ga dialect which is not Akan by the way but still Ghanaian. Not once did any of the characters mistake to use a foreign language or perhaps if they did on set editors made sure it was not in the final edited film. This has actually helped to reveal the Akan names of certain words overpowered by the Strong English Influence.

In the Hollywood horror film, Sleepy Harlow and an Arabian Night movie, Twi was used to break a spell and ridiculously insult another character respectively.

So far, I loved everything about Mesduah Productions but was troubled with one inadequacy. I was personally troubled because immediately I started giving attention to the series and understood it’s worth I wanted the globe to be able to see it, understand and appreciate Ghanaian culture in a way that they have never experienced and it did so in a subtle but in an unprecedented way. I am certain a lot of time, money and other resources must have been invested into to this for it to come out that good! It looks as if the villages and communities were intentionally built just for the purpose of filming. It is just incredible.

I was always wondering why Sankɔfa and Abubro Kosua had no subtitles. Being a beginner at video editing and knowing how subtitling can be slightly hectic I still wanted to see some English interpretations on the screen. Despite how frantic subtitling can be, it’s relevance and benefits make the process worth it.

I believe the series are so good, other cultures will be willing to watch if only there was a way they could understand the film: subtitling. English is the most widely spoken with 1.5 billion speakers according to findings from Statistica. Subtitling helps the deaf to also understand film. Subtitles improves comprehension because the whole world doesn’t speak Twi, in fact not even all Ghanaians speak Twi. It also helps audience to unconsciously learn how to speak the local dialect. I have a Gambian friend who learned to speak and understand Hindu just by watching Bollywood with English subtitles.

If local dialect movies are scripted in English as I have heard some Kumahood actors reveal during interviews, then I guess it should be slightly easier; copy-paste-adjust text to dialogue.

Unfortunately just before and after the third commercial break for Ahintasɛm, there were no more subtitles. While there were still subtitles, there were a few typos and a few under-interpretations of dialogues. I was extremely happy when I saw the subtitles in about fifty percent of the first episode. It is never too late to add subtitles to Sankɔfa and Abuburo Kosua. I really hope that from henceforth subtitles will be considered and will even more importantly be used accurately. I also humbly suggest that the font is made bolder and the font size slightly increased. However I happen to know just the one to give you a flawless subtitling finish to the films at an affordable cost: Dittotype.

I am also very happy that Mesduah Productions makes appropriate use of the Akan vowels “ɛ” and “ɔ”. Many written Akan words recently lack the appropriate alphabets especially in text messages and on social media. They are mostly omitted and replaced by a similar sounding vowel like in the case of Adom TV where Ahintasɛm was spelt as Ahintasem during the premiering of the series. Even YouTube videos of Ahintasɛm are wrongly spelt including “Mercy Asiedu official TV”. I was however pleased that citinewsroom.com accorded the dialect the needed respect in their reportage about the UK Prime Minister Boris Johnson citing the popular Akan proverb by using the accurate Akan alphabets.

Even the short discussion of the series held just after the show is another masterpiece on its own. It is an in depth analysis and review of the film. The host evaluates and discuss with her invited guest, the day’s episode form really amazing angles giving off great advice and moral lessons from the film.

Generally I am relieved that while the western telenovela preaches revenge Mesduah Productions’s Twinovela as they are sometimes affectionately called, also teaches redemption and a-vengeance-is-of-the-Lord kind of moral apart from their main themes. I also hope that the adverts are reduced.

Police arrest Funny Face after threatening to kill mother of...
7 minutes ago

Police comb for Shatta Wale after reportedly shot
14 minutes ago