By Stuart Gillespie - The Conversation 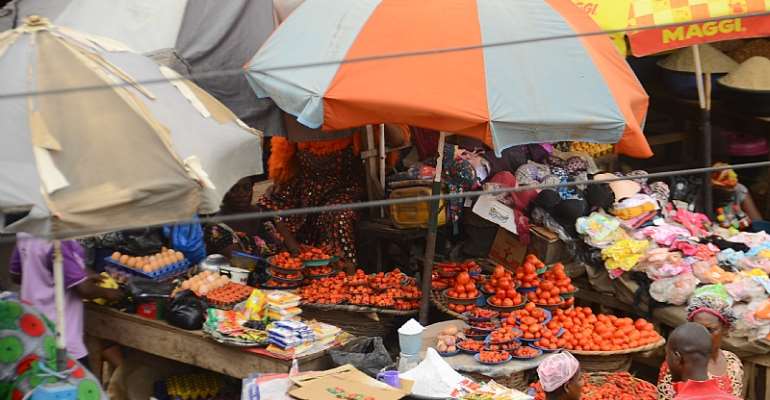 A food market in Ibafo in Nigeria&#39;s Ogun State. The effects of COVID-19 on food systems will be keenly felt in poorer countries. - Source: Photo by Olukayode Jaiyeola/NurPhoto via Getty Images

Malnutrition is by far the biggest driver of ill-health and premature mortality in every region of the world. A slow-burn attritional problem, it does enormous damage.

The COVID-19 epidemic that's sweeping the world, meanwhile, brings a series of massive short-wave shocks. Both the epidemic and malnutrition will generate long-wave impacts, for years to come. They are also likely to interact with each other – badly.

This will be particularly true in countries in sub-Saharan Africa and South Asia. Many of these countries' governments, health and food systems, communities and households have limited capacity to respond to nutritional challenges or to an epidemic. This means that the potential exists for malnutrition to exacerbate the health consequences of the COVID-19 epidemic, and vice versa.

A year before this virus appeared on the world stage, a pioneering Lancet Commission called for “a radical rethink of business models, food systems, civil society involvement, and national and international governance” to address the interlinked crises of obesity, undernutrition, and climate change. Now COVID-19 can be added to that list.

To address these interacting crises, a comprehensive multisectoral response is needed that revolves around strengthening community and state capacity and resilience to future shocks.

Malnutrition comes in several forms. These include undernutrition, overweight and obesity, along with associated diet-related non-communicable diseases.

The vicious cycle between undernutrition and immune health has been known for half a century. That's when the term “ nutritionally acquired immune deficiency syndrome ” was first used. Undernutrition can heighten the severity and duration of several diseases, especially pneumonia. Ill health can exacerbate undernutrition in several ways, including the compromised absorption of nutrients.

On the other side of the spectrum, obese adults – whose immune systems are chronically activated to respond to inflammation – are also likely to be at greater risk of severe COVID-19 symptoms. Excess weight can compromise the ability of lungs to take in oxygen; people living with obesity tend to have poor cardiovascular health, to be less physically active and to be diabetic .

It's early days in terms of what scientists do and don't know. But new data from the UK and the US suggest obesity is indeed associated with higher novel coronavirus death rates.

We also know that COVID-19 is a respiratory disease that spreads rapidly in overcrowded contexts where many people are in frequent close contact. Insanitary conditions, such as those in the sorts of urban slums and refugee camps that are common in the global south, increase the risk of rapid spread.

Malnutrition is common to both urban populations and refugee camps . And urban populations are more likely than their rural counterparts to consume ultra-processed foods , which are widely available and known to significantly increase the risk of obesity and other non-communicable diseases.

Given all this, it is certain that COVID-19 epidemics will interact with malnutrition and food insecurity in the global south. Some of these connections are already clear , in the way that food systems operate, or don't, during a pandemic. Any shock to a food system will hit the poorest households hardest, via numerous pathways: higher food prices, less purchasing power, reduced ability to stockpile, higher risk of losing jobs, and a lack of safety nets.

COVID-19 doesn't only present a massive current challenge for food systems . It both exposes and amplifies the inequitable way in which they operate, especially with regard to nutrition well-being.

Seven years ago, the presciently titled paper “ Profit and Pandemics ” highlighted the increasing damage being wrought by transnational food company marketing of ultra-processed foods in the global south. Since then, experts have learned a lot more about the harm these foods cause to nutrition and health. This harm may now translate into greater risk of severe COVID-19 disease for millions.

The response to these interlinked crises needs to be comprehensive, cross-sectoral and it needs to be rapidly mobilised from national to grass-roots levels. Countries in the global south will also need support from the international community.

In addition to proven health interventions for controlling viral spread, there's a critical need to develop, strengthen and “COVID-proof” social protection systems to protect the most vulnerable households.

With regard to food systems, the state has to take the lead in highlighting healthy diets for all as a central goal. Here it can re-learn the lessons from past AIDS epidemics about the importance of human rights. Not only will this help protect populations now, it will pave the way for a more equitable and sustainable food system on the other side of the pandemic.

Stuart Gillespie does not work for, consult, own shares in or receive funding from any company or organization that would benefit from this article, and has disclosed no relevant affiliations beyond their academic appointment.

Hottest Photo Reports
Catch up with all the political quotes from our politicians.
Advertise here
More Article
ModernGhana Links
The Psychosocial Impact Of The Recent Murder Cases In Ghana
High Unemployment Rate: A Major Driver Of Insecurity In Ghana
The role of extractives in Africa’s inclusive green and resilient recovery
Oyo jailbreak has to be the last.
Hushpuppi Saga: A Wake-Up Call For Public Awareness About Business Email Compromise Scams
Sketchy Treaty Uncertain For Its Implementation Had Averted Thebloody And Fatal Scuffle In Somalia
A poor Liberian found US$50,000 and returned it to the owner
Ursula Owusu Ekuful is the Yaa Asantewaa of Digitalisation
In sub-Saharan Africa and Elsewhere, We Need to Look Harder for TB
TOP STORIES