Paul Adom-Otchere The Liar Vrs. Paul The Gangster In Times Of Need 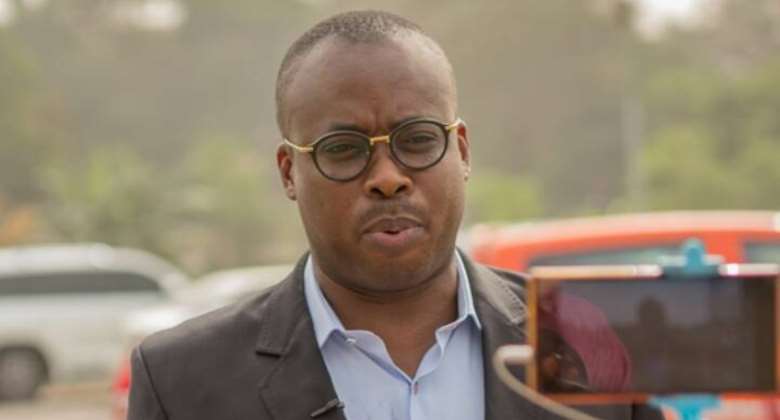 As politics gets patronized, with many convincingly describing it as the opium of the masses, a lot is shaped out of it. One of such is the strenuous effort to tie-in the media as the 4th tier in the governance structure.

This informal fourth realm of the state description the media carries home to manifest in political systems where structures and conscience function. The case of Ghana in this context has been a sad one.

Media pluralism in Ghana in the early 2000s was greeted with joy with the hope that our democracy will get shaped and refined to serve the voiceless.

What we have today is a mockery of a media that is set to serve the masses; it instead has become a handle for many a politician to manipulate, use as a cover in times of stealing and ultimately a platform to share the booty at the expense of the suffering masses. That is why media today has become big-time business and not a watchdog over the reckless “politician”.

Yesterday, 16th April 2020 was a sad day for most Ghanaians especially most viewers of Good Evening Ghana, a program produced and hosted by Mr. Paul Adom-Otchere the LIAR. Those whose expectations were bloated and those who exaggerated the person of Mr. Paul went to bed messed up. To those of us who stood down for Paul since 21st September 2016 after he (Paul) was caught lying without being coerced....we only sympathize with you guys. Sorry!

Mr. Paul Adom-Otchere, an appointee of President Nana Addo is a media practitioner with about 20 years of experience. He’s won an award in 2001 as the best News Reporter and other awards in subsequent years. The Good Evening Ghana (GEG) program which he produces and host at the same time has been one of the current affairs programs many people follow in the past, until when it started to lose direction and meaning. Many intellectuals have had their turn; many business moguls have had their bites and many political heads & other key stakeholders including sitting presidents have had time to grant interviews on this platform. So, the GEG program is not for one to use to display personal hatred, anger or to be used as a platform to settle personal scores or even bid for contracts and appointments.

Just when the GEG program was about to float, boom! Nana Addo appointed Paul Adom-Otchere among the other 8 members to serve in the NCA board. With the growing insensitivity, biases, propaganda, issue-centering, lies peddling, naked attacks on individual’s personalities among other gangsterism on that platform, one is left with no option than to conclude that he (Paul) was appointed not on merit as a media consultant but to serve a political agenda of the President. Maybe, aside this possibility, the alleged wicked agenda of the NCA to hack and rig election 2020 is one reason Paul gets agitated when he sees the NPP is losing out on daily accounts.

A platform such as Good Evening Ghana started to lose its relevance when Paul decided not to only show his true NPP colors, but also decided to host some blockheads who ought not to get that opportunity on such a “big” platform. How can you host that empty barrel, Wuntimi on such a platform? To discuss what? For who to watch and learn what? Why will Paul host that Maggician and crook who call himself Prophet Owusu Bempah? Who will take such a platform serious anymore? A so called Prophet who prefers to give a HORN to a President as protection and not a Bible.

To me, the very day Paul lost it was when he lied that Nii Arday Clegg engaged in “stealing” in an exam for he Paul. In a Starr Chat with Bola Ray, Paul when asked the mystery question, out of nothing and without any coercion to choose Nii Arday Clegg, decided to tell a naked lie on Nii with the intention of destroying the latter’s credibility. If it were in a serious democracy, Nii would have lost his license as a Lawyer if he didn’t go after and caught Paul in that sorry state of a lying gangster.

Thank God he (Nii) did and he did so in a grand style. Listening to that phone conversation between Paul and Nii where Paul stammered through out and in the end admitted that he told a palpable lie, one would have thought he will resign from preparing coffins for people who are healthier than him.

Nii Ardy didn’t just catch him, he stripped him naked, described him as evil and a liar and even discounted the impression that he and Paul were cool friends. Up until today, nobody knows what exactly Paul wanted out of that gangsterism he displayed on that Bola Ray’s show. Maybe it was some witchcraft!

Since his appointment in July 2017, he has been jumping from one controversy to another. Out of nothing, Paul decided to join the Akyem history writers and used his platform to run Nkrumah down. Ironically, Nkrumah’s own son, Mr Sekou, who either needs a psychiatric attention or to be declared a forever “idiot” of a son, also joined Paul to ridicule his father’s legacies.

From nowhere and without invitation, Paul decided to do a biased documentary of Rawlings and used same to bastardized the man. Without any provocation, Paul launched unsolicited attacks on Koku Anyidoho in 2018. Is the platform supposed to educate and provoke intellectual engagements or for Paul to use to serve his parochial interest?

Just when we thought we had it all from the Liar, Paul Adom-Otchere, he just showed his ugly side again on Dr Zenator Rawlings. What did the latter do to warrant what Paul did? Dr Zenator only repeated in words the frustration expressed by many Ghanaians on the issue of Nana Addo and his ministers sharing food on partisan lines.

In fact, Dr Zenator openly called for investigations and accountability on the claims that GHC 2m was used to prepare the said food in a day, yet, many people couldn’t access the food either because they were not NPP members or that the food wasn’t enough for all. This singular act alone should get all Ghanaians outraged and not the likes of Paul the Liar to come and justify that wickedness and broad day stealing of the taxpayer’s money.

How on earth could this simple patriotism of calling for investigations and accountability warrant such empty noise and needless attacks on Dr Zenator? If not in Ghana, how can a liar like Paul be given the opportunity to sit on public TV again when he openly admitted that he told an unsolicited lie on a colleague Lawyer? Paul is a member of that gang who don’t get satisfied with what they have until they succeed in destroying others as a bonus.

What Dr Zenator said or called for has never being a secret. We have seen videos of helpless Ghanaians crying for food which they were denied because they didn’t have the NPP membership card. Paul could just go on YouTube to watch the floating videos by Ghanaweb and other media outlets and confirm or otherwise of Dr Zenator’s claims. Conversely, the gangster in him won’t let him do the needful. Nobody expects a Nana Addo’s appointee to be neutral in times like this, but all of us expect a man with a conscience to be fair on issues of humanitarian crisis and national emergencies.

The fact remains that, the food the Gender Ministry prepares can’t consume GHC 2m from our taxes a day. The fact also is that, the said food is being given to NPP Parliamentary candidates most of whom are not government officials, and they rather share to their party members instead of all Ghanaians. How hard Is it to accept this? If Paul had issues with Rawlings, please let him be a man to settle it with him squarely and not his daughter.

Paul the gangster must allow Paul the liar to function as a man with a conscience, not all the time but in times like this.