By Joe Jackson, with Dmitry Zaks in Rome and AFP bureaus 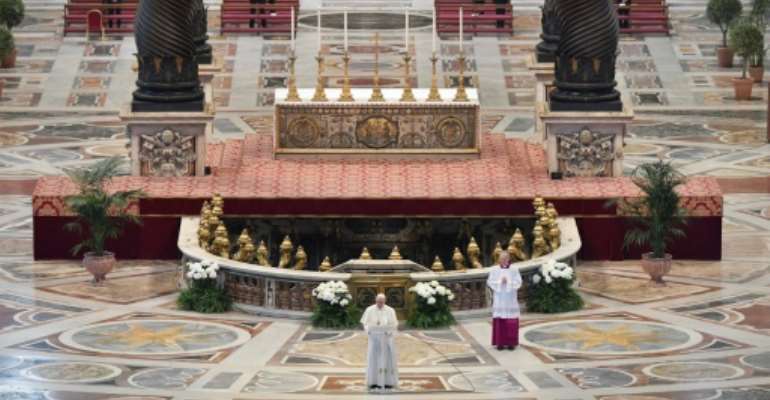 The pope's Easter Sunday message was peppered with prayers for the ill and urged European solidarity to fight the pandemic. By Handout (VATICAN MEDIA/AFP)

Virus-stricken British Prime Minister Boris Johnson thanked medics for saving his life after leaving hospital on Easter Sunday, as hundreds of millions of Christians observed the holiday under lockdown due to the coronavirus pandemic.

More than half of humanity is confined at home as governments scramble to stop the COVID-19 pandemic, which has claimed more than 112,500 lives around the world.

More than 1.8 million people have been infected but glimmers of hope were emerging that the worst may be behind -- especially in Europe, where hard-hit Italy recorded its lowest death toll in three weeks and fatalities fell in France.

Johnson, the highest-profile leader to contract the virus characterised by high fevers and coughing, voiced confidence that Britain would beat the pandemic in a candid video message after he was discharged from a state-run National Health Service (NHS) hospital.

"We will defeat this coronavirus and defeat it together," Boris Johnson vowed, thanking medics he said saved his life "no question"  . By Pippa FOWLES (10 Downing Street/AFP)

"I hope they won't mind if I mention in particular two nurses who stood by my bedside for 48 hours when things could have gone either way," said 55-year-old Johnson, who was admitted on April 5 to a London hospital where he spent three days in intensive care.

In a suit and tie but visibly warn, Johnson said he was discharged after "a week in which the NHS has saved my life, no question".

Even as Johnson headed to a country estate to rest before returning to work, Britain passed the grim milestone of 10,000 deaths.

Johnson, like US President Donald Trump, had initially resisted stringent measures such as shutting down public places.

The United States has since recorded the world's highest death toll at more than 20,500.

From the Vatican to Panama and the Philippines, there were unprecedented scenes of empty churches as the world's two-billion plus Christians celebrated Easter from the confines of their homes.

Speaking from a near-empty Saint Peter's Basilica at the Vatican, Pope Francis offered prayers for the ill and urged "solidarity" to fight the outbreak.

"For many, this is an Easter of solitude lived amid the sorrow and hardship that the pandemic is causing, from physical suffering to economic difficulties," he said in a live-streamed message beamed around the world.

On the outskirts of Rome, one devout follower held a video session with friends to mark the holy day in lieu of being able to gather in church.

"Before lunch, six of us connected online for the Angelus prayer," said Rosa Mastrocinque, adding that her "spirituality has increased" during her weeks-long confinement.

The pope had earlier urged creativity to mark the holy weekend -- a call that was met by many.

In Panama an archbishop blessed his nation from a helicopter, while one priest in Portugal addressed the faithful from the open top of a moving convertible car.

In one church north of the Philippine capital Manila, hundreds of pictures of parishioners were taped to pews as a priest led a Sunday service in a near-empty sanctuary.

Unlike France and Italy, Spain reported a slight spike in deaths with 619 fresh fatalities after declines over three straight days.

France's lockdown continued over the Easter weekend, while the government said the virus's plateau may have been reached. By Ludovic MARIN (AFP)

Prime Minister Pedro Sanchez warned there could still be tough times ahead, even as the number of new infections continued to slow.

"We are still far from victory, from the moment when we will recover normality in our lives," Sanchez said in locked-down Spain.

"We are all keen to go back out on the streets... but out desire is even greater to win the war and prevent a relapse," he added.

New York, the epicentre of the virus in the United States, has gradually seen the public health crisis stabilise after a devastating week.

"You're not seeing a great decline in the numbers, but you're seeing a flattening," Governor Andrew Cuomo told reporters.

"And you're also seeing a recurrence of the terrible news, which is the number of lives lost, which is 758," he said of the past 24 hours across the state of New York.

The World Health Organization has warned countries against lifting lockdown restrictions too early.

India has imposed a nationwide lockdown but dozens of cases were reported in a Mumbai slum, Asia's biggest. By Arun SANKAR (AFP)

Governments are under pressure to keep populations safe while preventing the collapse of their economies, amid warnings from the International Monetary Fund of a downturn not seen since the Great Depression.

Trump had earlier voiced hope at returning to normal by Easter but backtracked after dire warnings from public health experts.

Anthony Fauci, the White House's top advisor on infectious diseases, said Sunday that parts of the world's largest economy may be ready to reopen by May 1 -- but warned it would not be like a "light switch" with the entire country ending restrictions together.

There were also worrying signs the virus could be taking hold in new -- and vulnerable -- parts of the world.

Conflict-wracked Yemen reported its first case last week, while in Mumbai's crowded Dharavi slum -- one of Asia's biggest and the inspiration for the 2008 Oscar-winning film "Slumdog Millionaire" -- more than 43 cases have been confirmed.

"We have been running extensive medical camps in Dharavi and other areas of Mumbai to test more people for coronavirus and make sure carriers are not ignored," said Mumbai official Khabale-Patil.

Nigerian President Muhammadu Buhari urged all residents to stay at home and wash their hands -- but has not said whether stay-at-home orders due to end Monday in three major cities will be extended.

Spectacular and Elusive Bird Rediscovered in Atewa Forest
1 minute ago