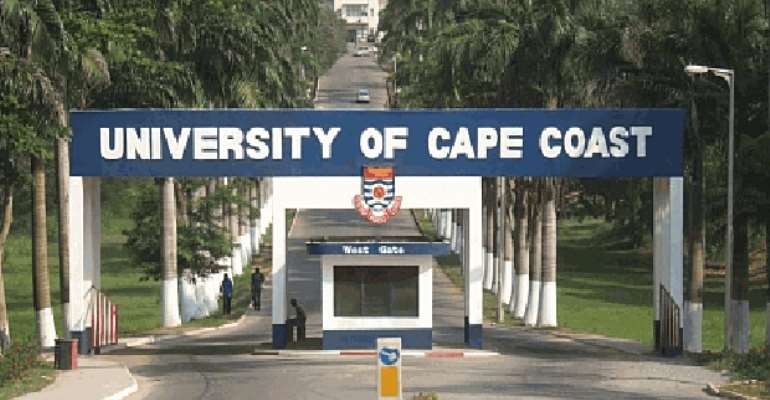 Managing Director of Barony Construction and Tacoa Construction Limited, Mr Henry Tackie, has furiously dared authorities of the University of Cape Coast (UCC) to produce or publish evidence of fraudulent charges against him from the Criminal Investigations Department (CID) of the Central Regional police headquarters.

The soft spoken Managing Director of the construction company that started over forty five (45) years ago, noted that some individuals of the university, allegedly being led by the Vice Chancellor, Professor Joseph Ghartey Ampiah have continuously dragged his enviable reputation in the mud with such spurious and ill-motivated allegations without any proof.

According to him, the malicious allegations started last year December with a paid publication in Daily Graphic and its online portal with the hoax claim that the Central Regional Police Command had referred an alleged docket on a case of alleged forgery and fraud involving him (Henry Tackie), to the Attorney General’s Department for advice.

He disclosed that the unprofessional story which was hurriedly written to satisfy the desires of its paymasters failed to verify from either the Central Regional police commander whether he was actually arrested for presenting fake documents to secure contracts from the University of Cape Coast (UCC) and if there was a docket to that effect or from the Attorney General’s Department if indeed, such a docket had been forwarded to them for advice.

Mr Tackie furthered that, the said publication, which lacked the basic principle of journalism was a concocted piece aimed at tarnishing his reputation because there is no docket at the regional command indicating his arrest or forwarded to the Attorney General Department for any advice.

“There is nothing like fraud against me at any police station. I have never been charged for fraud as being shamelessly speculated by those desperate individuals at UCC. I am daring them to bring out the charge sheet or publish it if there is any. It’s so sad that such individuals manning the affairs of such a great university could be peddling lies just to tarnish the image of others”, he noted angrily.

Setting the records straight
He noted further that he was not arrested by the Central Regional police command but that he was invited to following a malicious report by the university of Cape Coast that I had presented fake documents to secure contracts from the University in 2014 after he had filed a contempt case against the Vice Chancellor and two others.

“As a law abiding citizen, I went to the Central Regional Police Command with my lawyer and my statement was taken. I was requested to make available some documents to the Central Regional Police Command since the same case is pending before a high court and was asked to go home without being charged for anything. I subsequently provided all the documents as requested by the Regional crime officer, Chief Superintendent Reuben Asiwoko”, he disclosed.

He said since then, he has not heard anything from the Central Regional police command or any other police station regarding the issue which is pending before an Accra high court adding that “it’s curious that those individuals in the university continuous to swimming in such baseless allegations as if they were a branch of police station”.

“It’s the state that handle criminal cases such as fraud and not individuals, so if the police had found any evidence of fraudulent activities against me why are they not prosecuting me at the law courts”, he quizzes.

How We Got Here
Mr. Tackie explained that he secured four separate contracts from the UCC with genuine documents which had been completed and was waiting to be paid but the university authorities failed to settle him for unknown reasons.

He said before signing the contracts, his company was requested to present a performance bond and advance payment guarantee so “we relied on an agent for his services which were backed by payment receipts. Mostly the bonds are issued to conform with the duration of the contract. But in our case, the bonds had expired because the contracts has exceeded its tenor(2years)”.

In early April 2019, the university under the new Vice Chancellor Prof. Joseph Gartey Ampiah wrote a letter to my company notifying us of alleged fake bond and gave us a period of seven (7) days to respond to which my lawyers responded within two(2) days with copies of receipts of payments from the agent. But we later realised that the agent was not honest and immediately logged a complaint at the Police for his arrest and prosecution. The police went to court and secured a bench warrant for his arrest and are currently looking for him.

However, out of the four contracts, two have been fully completed and advance payment duly paid by us. The two others are ongoing and are at various stages of completion. The construction of three-storey regional study centre at Zuarungu in the Upper East Region is seventy percent (70%) complete and the construction of a three-storey regional study centre for CoDE at Jumapo in the Eastern Region is thirty percent (40%) complete.

The Vice-Chancellor of UCC, Professor Joseph Ghartey Ampiah, on assumption of office, issued a note to TACOA Construction Limited to terminate all projects on the basis of alleged submission of a fake contract for signature and asked the university to set up a panel and report on the petition within a month.

Henry Tackie, on his part, petitioned the Minister of Education, Dr. Matthew Opoku Prempeh, who directed the National Council of Tertiary Education (NCTE) to investigate the alleged illegal termination of contracts by the UCC.

But the university allegedly refused to comply with the minister’s order and rather through its counsel, Solomon Faakye, took him to the Cape Coast High Court for an order to release the keys to them to get access to the buildings for the use of students even though the university claimed the contracts were secured illegally.

Mr. Tackie explained that the Cape Coast High Court, at its last sitting on the case, referred it to the Chief Justice to transfer the case to Accra which is currently pending at High court.