Samuel Waterberg Was Only 41, But Died Of COVID-19 In Ghana

Friday, March 27 started as a regular day until family, friends and loved ones were hit with news of the demise of their beloved Samuel Bediako Waterberg.

“Life” they say, “starts at 40.” If this is anything to go by, then Samuel Waterberg died a kid.

Hundreds of emotional tributes began to pour in almost immediately in reaction to the heart-wrenching news.

A man “full of ambition”, “paid his dues,” “a bright and aggressive game-changer,” some of the many tributes read.

He was also the president of Maxim Nyansa Foundation.

Samuel died from the dreaded COVID-19 that has so far affected 152 people in Ghana.

He's among the five persons named by the Ghana Health Service to have succumbed to COVID-19 in Ghana.

A Lebanese spare parts dealer in Kumasi, 61, was the first casualty in Ghana. Another aged patient died later. Wife of a retired navy chief in her 70s also succumbed, before a 75-year-old man passed on with the disease. 41-year-old Samuel’s death was also announced not long after.

At such a young age, Samuel Waterberg, who family and friends say took ill briefly, lost his life to COVID-19 in what remains a shock to most people who knew him.

The development comes to strongly contend with the views held by some persons that COVID-19 does not affect young people or at the worst will only keep them hospitalized for a short while and cannot result in mortality.

Statistics from the Report of the WHO-China Joint Mission and A paper by the Chinese CCDC released on February 28 and February 17 respectively, which have been aggregated and reproduced by Worldometers.com pegged the highest mortality from COVID-19 within the bracket of persons 80 years and older. This group of people had an 18 per cent mortality rate from the Coronavirus.

They are followed by persons aged between 70 and 79 years old, who have a mortality rate of 8 per cent.

The mortality rate from COVID-19 within people between ages 40 and 49, where Waterberg fell, stood at 0.4 per cent. 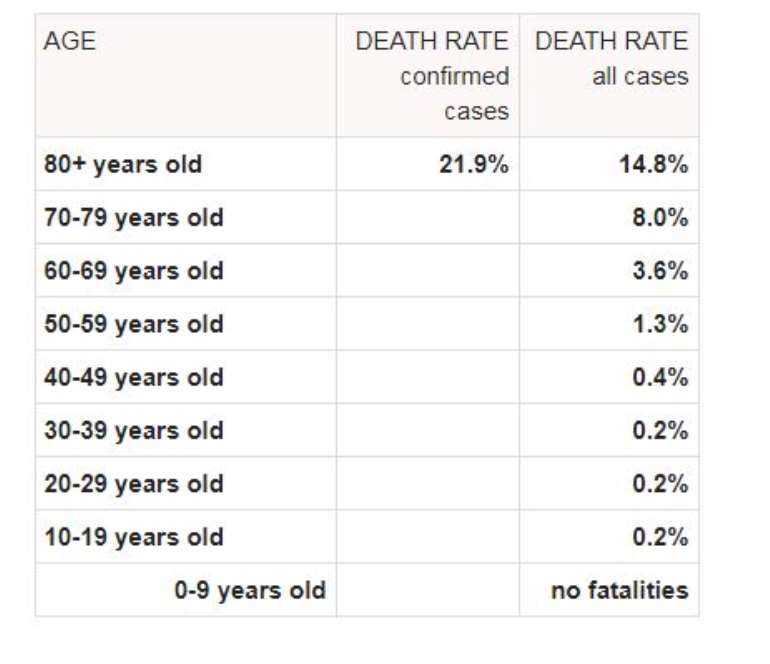 While mortality amongst that age group is low, there are still a significant number of deaths recorded among persons aged between 40 and 49. 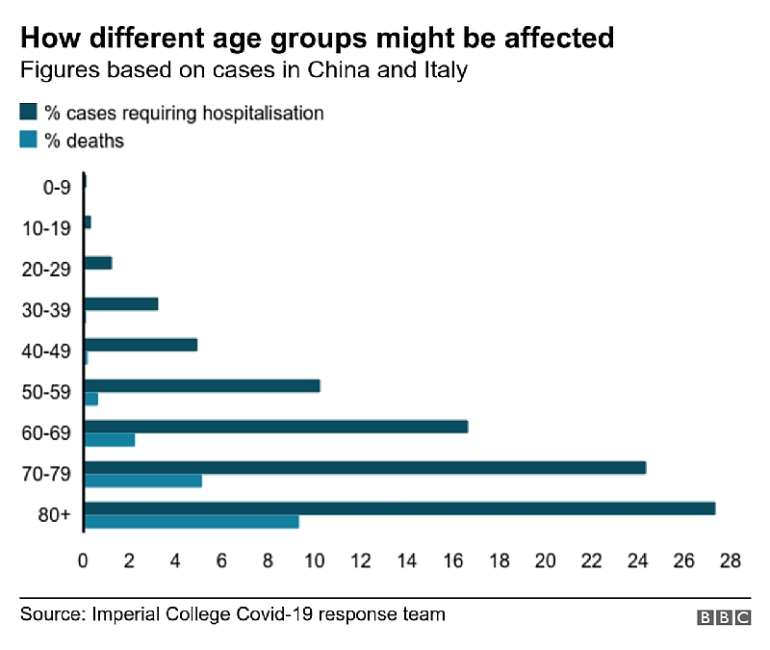 The baseline, in this case, is that, older people are the most at risk of COVID-19.

However, no age is immune to contracting the disease.

Mr. Waterberg, was very active and wasn’t known to have had any complex health challenges that could have aided his early demise.

However, the Ghana Health Service on its website communicating updates on Ghana’s COVID-19 cases, suggests that Mr. Waterberg had underlying health conditions.

The website in an update for Monday, March 30, 2020 repeated its emphasis that, “all five (5) had underlying chronic medical conditions prior to COVID-19 infection.”

This view is being disputed by those close to the deceased, although the death emphatically highlights the risk young people like anyone else in any populace face with contracting COVID-19.

Earlier this month [March], Samuel Waterberg participated in the CATAPULT: Inclusion Africa 2020 event held at the Luxembourg House of Financial Technology in Luxembourg between March 1 and March 8.

He also pitched at that event before returning to Ghana.

Samuel Waterberg, who hails from the Eastern Region, is both Ghanaian and a Dutch who lived in the Netherlands for 22 years before returning to Ghana in 2011.

A banker by profession, he worked for seven years in the Rabobank in the Netherlands, in the position of Relationship Manager Corporate Client, responsible for medium-large companies and institutions.

He had expertise in areas such as health care, financial service, handling production companies, transport and high-tech companies.

He was regarded as “an icon” in the Dutch community in Ghana and was therefore not surprising that the Dutch Embassy in Ghana requested to move his remains from the Ga East Municipal Hospital to a private mortuary facility.

The ambassador, Ron Strikker in a letter to Ghana’s Health Minister a day after the death was confirmed, made the transfer request to the ministry but the Minister did not grant the request.

In his response to the ambassador, Ghana’s KwakuAgyeman Manu said, “we regret to inform you that according to our Public Health Regulations, persons who died in such instances are strictly handled and buried by the State. Therefore, unfortunately, we are unable to grant your request.” 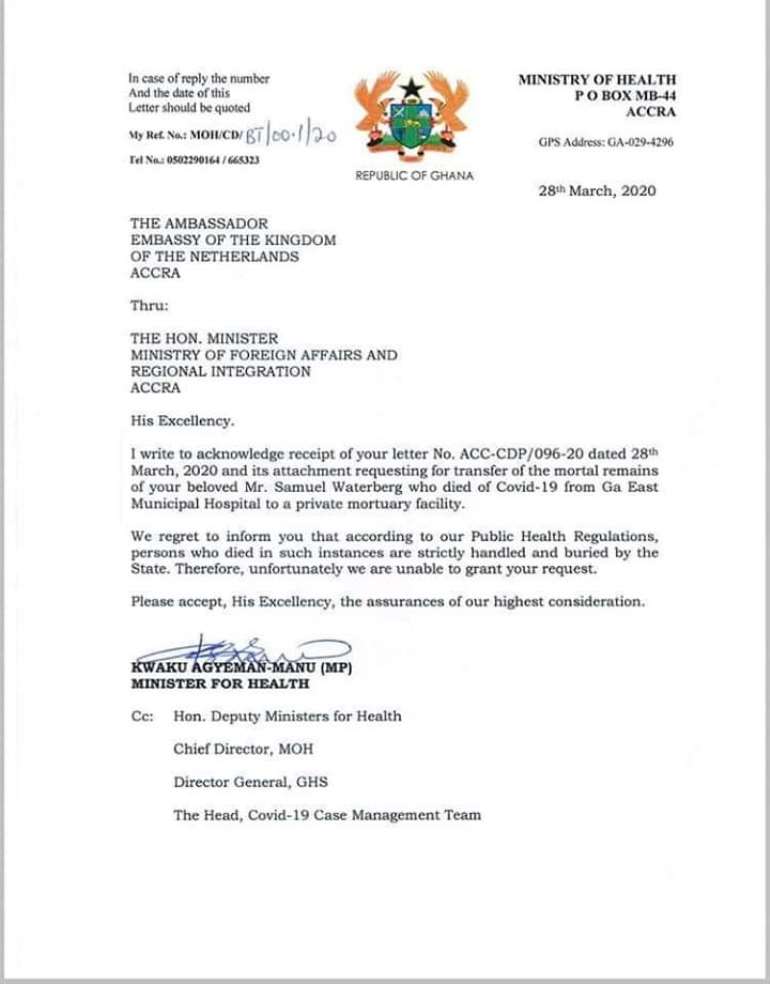 It is unclear if the burial has already been done.

The Luxembourg House of Financial Technology (LHoFT) which describes Mr. Waterberg as an exceptional leader, amazing soul and a great human being, has launched a fundraising campaign on GoFundMe to support the family of the deceased.

Samuel left behind a wife, three children and many loved ones.

An e-book of condolence has also been opened for friends, family and close associates to share their fond memories and condolences at: [email protected]

Anyone of any age is at risk of contracting COVID-19. Strict adherence to precautionary measures including regular hand washing and social distancing will go a long way to save your life and that of the person next to you.