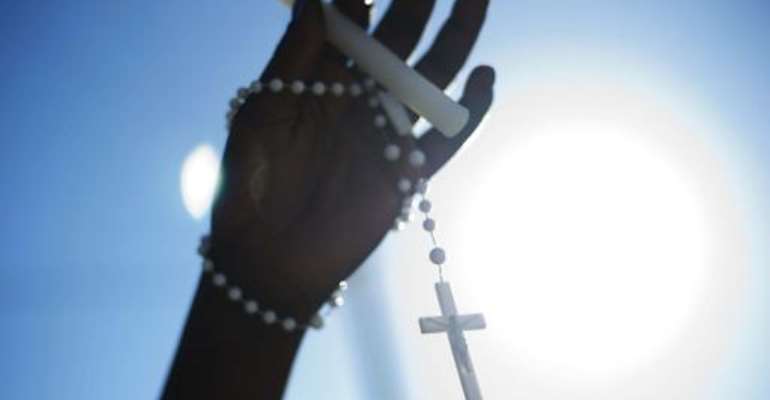 Tens of thousands of Catholics have gathered in the Kenyan town of Nyeri for the beatification ceremony early Saturday of an Italian nun, a key step towards sainthood. By Hector Retamal (AFP/File)

Nyeri (Kenya) (AFP) - Tens of thousands of Catholics gathered in the Kenyan town of Nyeri on Saturday for the beatification ceremony of an Italian nun, a key step towards sainthood.

Irene Stefani was an Italian member of the Consolata Missionary Sisters who helped the wounded in Kenya and Tanzania during World War I before shed died of the plague in 1930.

A trained nurse, she was much loved by the people of the Nyeri district, who called her "Nyaatha", or "Mother of All Mercy" in the Kikuyu language.

The streets of Nyeri were packed for the Roman Catholic beatification ceremony in the town, some 150 kilometres (90 miles) north of the capital Nairobi.

Thousands had also held a night vigil that began on Friday afternoon.

Stefani, who was born in 1891 near Brescia in Italy, will be the first person to be beatified in the east African country. She was 39 years old when she died in Kenya.

Roman Catholics say she performed a miracle after her death, in 1989 when people fleeing Mozambique's 1977-1992 civil war prayed in her name.

Running from rebel battles, the faithful sheltered in a church at Nipepe, in Mozambique's northern Niassa region, and said that their prayer to Stefani caused the water in the church font to flow, keeping the thirsty alive.

Relatives of Stefani have travelled from Italy for the ceremony.

"I am very happy to be here, the hospitality of the Nyeri people s great," Giovanni Zecchini, 51, whose grandmother was Stefani's sister, told The Standard newspaper.

Over a thousand police officers have been deployed to provide security at the ceremony, which will be held at a university compound in the highland town.

On Sunday, her remains will be transferred to the cathedral in Nyeri.

President Uhuru Kenyatta praised her "selfless service to ordinary Kenyans", saying that "her compassion knew no bounds of race or class, and she spared nothing of herself," a statement read.

Newspapers in Kenya on Saturday displayed the nun's face on their front page.

"The making of a saint," the Nation newspaper's headline read.