Virus In The Ship: The Daunting Task Of Captain Akufo-Addo In Fighting COVID-19 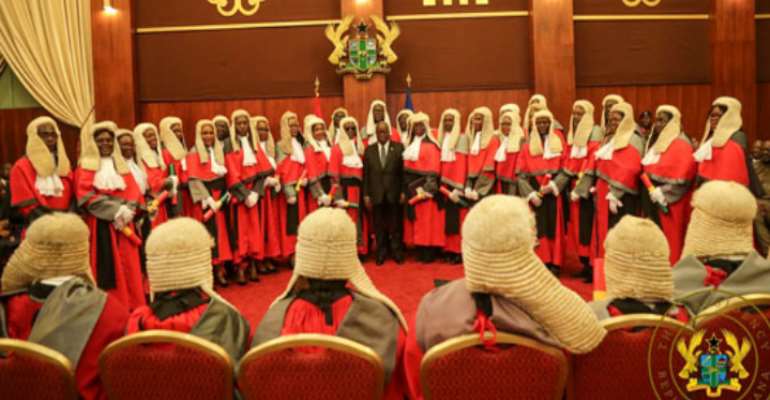 I hope by now the people who think living life as the head of state is cheap must be revising their notes. If not, why’ll the hairs of most of these leaders instantly turn grey the moment they take on the command of the ship of state as captains?

Generally, a ship of state is a known political metaphor that is likened to the governance of a country. Usually, the command of such ship is put into the care of a captain with vast knowledge in seafaring; and the sailors are the citizens.

Honestly, the true measure of such a captain is his integrity—always being true to his words. That includes being responsible for his acts, caring and providing for his crews, and protecting those to whom he has promised his protection, and making sure that the ship safely gets to shore regardless of the sea's uproars, turbulence, and strong currents.

Today, armadas of ships are currently going through abnormal times at sea as they're being confronted by a pandemic disease, the COVID-19. And given the current circumstances, being a captain in the ship of state with uncontrollable cases of the COVID-19 infections can be a daunting task. For that reason, having a shortsighted captain at the helm of our ship of state in dealing with the fight can be disastrous As such, the successful eradication of the virus in the ship is dependent on the capacity and foresight of the naval captain (I'm talking about the role of the president).

Here we're the confirmation of the COVID-19 within our ship has taken the captain and his crew unaware, because it appeared they were ill-prepared from day one. Equally sad is the fact that the ship has already run out of essentials like hand sanitizers and tissue papers. And there are signals that the plight of all the sailors on board could get worse soon as the people close to the captain are chasing an outside "ship repairer"—The IMF, helplessly, for $100 million dollars to quickly mount a fightback to prevent the virus from escalating.

Shockingly, way back 2016 when the current captain was seeking for the opportunity to replace the former captain of our ship, he went around and told all sailors that he has competent men to help him maintain the ship; and that the ship has enough resources, including fuel, to keep it running so he wouldn't need the service of the repairer they're chasing now for help.

As a crew, I can understand the plight of my captain. Commanding a ship of state isn't a child play especially at the time when the captain is spending about 70% of available revenues on wages for the crew and 30% on fuel and maintenance.

Last weekend, when news spread about more infections of the virus in the ship, our cheap partisan politicking by way of name smearing, bigotry, and hate speech which characterized our daily lives as sailors has naturally vanished into thin air.

The reason was simple: we all have one life to live, so every crew now fear the disease virus than the fear of losing the election because it has no remedy. What's more surprising is that this time, no oligarch on board can use his ill-gotten wealth to evade the virus. So, the best some of them are doing is to intercept every hygiene kit being sold in the ship to survive a potential lockdown at expense of poor sailors.

At the moment, in our ship, the rate of infection is standing at a manageable level when compared to cases in distant ships like China, Italy, Iran, Spain, South Africa and the scores of others.

In some distant ships, the captains have already called on all sailors to save a day or two for prayers. At least, what else could these captains do when science and technology are failing to offer hope? This is interesting because secularism has long denigrated the relevance of prayer in several ships. Thus, one may ask: when has prayer suddenly become important to the captains? But I think the U-turns made by those in command were on point. They need prayers now to keep the crew safe.

Now, as we continue our journey through the unstable flow of the pandemic, it became clear our captain couldn't risk keeping the sailors in a leadership blackout as the deadly virus continues to lurk within certain quarters of the vessel. It's no wonder that, on Sunday 15th March 2020, he swiftly called the crews and addressed them on the current level of the ship's emergency preparedness.

In the late evening address, many crews were deeply shocked at the demeanour put up by the captain: this time he sounded natural and humble as he spoke at length on laundry lists of combat measures including the closure of schools, churches, Mosques and other forms of crowd gatherings, and not forgetting the captain's populist assurance as he said he’s already keeping $100 million with his Financial Minister to prevent further spread of the virus (something some talkative crews later disclosed as untrue).

Contrary to the captain's assurance, I want to make it simple: the threat from coronavirus should be taken seriously. And while sailors are free to criticize the inactions of the captain, I think sometimes having talkative and nagging sailors in the ship can also hinder the fight. So it's necessary sailors cooperate with the captain and face the common enemy.

As human beings, we've got an incredible capacity for voluntary cooperation, particularly, in the face of looming disasters. At present, the sailors in distant ships who’re also nursing the devastating spread of the virus are cooperating with their captains. For example, in China, South Korea, the USA, Italy, and Spain the damage of the outbreak has so far been reduced drastically by widespread cooperation, some of which are mostly voluntary by sharing hygiene essentials to infected and uninfected persons going through mandatory and self quarantines.

In this way, as we find ourselves in a rare time, let's not live as spectators. The captainship role is becoming arduous. This isn't the time to smear the captain.

So, individuals, institutions, and NGOs must offer to support the captain’s efforts to contain the disease from spreading further in the ship. Our actions and inactions, if not put in check, can cause the ship to sink completely into a public health disaster. When this happens, I dare say, we may have to spend years as sailors in bailing out our ship from such avoidable mistake.

US revokes licence of top Chinese telecoms company
13 minutes ago