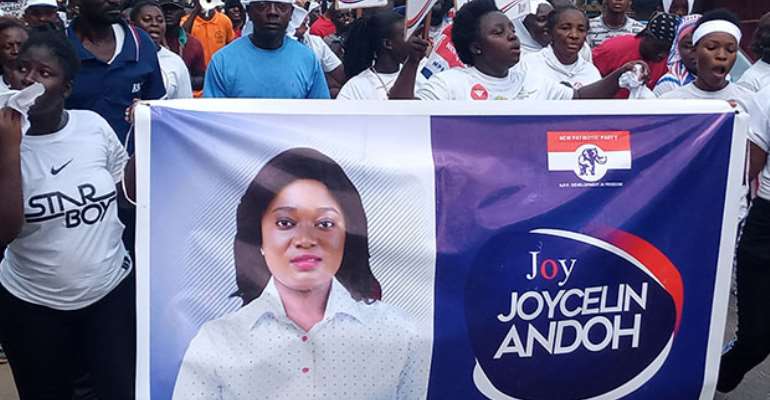 Hundreds of jubilant polling station executives of the New Patriotic Party (NPP) yesterday poured onto the streets of the Tarkwa-Nsuaem Constituency of the Western Region to celebrate the qualification of Joycelyn Andoh to contest the upcoming parliamentary primaries in the area.

Joycelyn Andoh was one of the three persons who filed their nominations to contest the primaries and subsequently went for vetting.

The rest included the incumbent George Mireku Duker and Frimpomaa Ayensu, daughter of a former DCE for the area.

Before the vetting committee of the party came out with their verdict, it was rumoured that Joycelyn Andoh had been disqualified.

The assertion was reiterated by the Western Regional Chairman of the NPP, Ndede Siah, in a television interview.

However, the chairman of the vetting committee, F.F Anto, in a radio interview disclosed that Joycelyne Andoh has not been disqualified and that she would be contesting the primaries.

Mr. Antoh explained that it was rather Frimpomaa Ayensu who was disqualified from the primaries and not Joycelyn Andoh.

The supporters of Joycelyn Andoh, mainly polling station executives clad in NPP paraphernalia, organized a procession through the principal streets of Tarkwa amid brass band music yesterday to celebrate the approval of their candidate to contest in the race.

Some of them held placards with inscriptions such 'Joy Our Hope', 'With Joy NPP’s Victory In Tarkwa Sure', 'Joy for the Youth', 'Vote Joy for Development', among others.

They finally gathered at the forecourt of the Evangelical Presbyterian Church in Tarkwa, where they were addressed by some polling station chairpersons in the constituency.

The Tamso Senyakrom polling station chairman, Kamara Tahidu, told DAILY GUIDE that the NPP needs to retain the Tarkwa seat in the December general election and that Joycelyn Andoh is the best candidate to help do that.

“We are so happy our candidate has been approved. Now the party needs more capable women in Parliament that is why majority of the polling station executives want to see Joycelyn Andoh in the next Parliament,” he said.

He said he was convinced that Joycelyne Andoh, when given the nod, would bring development to Tarkwa-Nsuaem to help improve the living standards of the residents.

He indicated that Joyce Andoh had already initiated some pro-poor policies in the constituency through her NGO and believed that she would do more when elected to Parliament.