President Akufo-Addo: One Man With Many Chieftaincy Titles 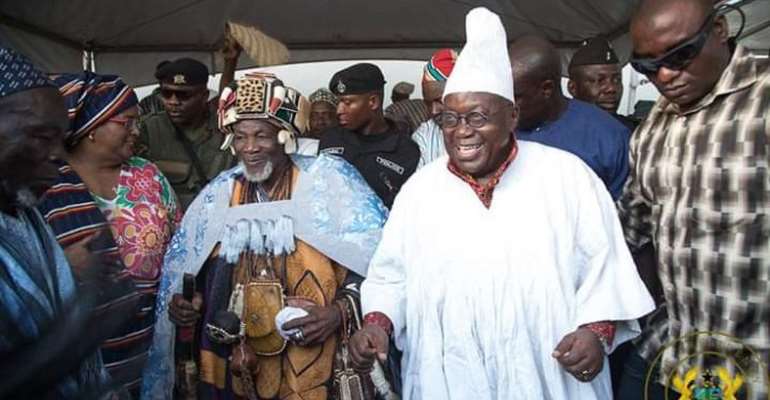 By Ghanaian tradition, the foremost criterion considered before conferring a chieftaincy title on a person is the fact that he hails from a royal family or lineage. This notwithstanding, it is a common practice for Kings and chiefs to bestow honorary chieftaincy titles on people who do not traditionally hail from their areas of jurisdiction.

In all or most of those instances, the chieftaincy titles are conferred on those people in recognition of their valuable contribution or services they rendered to the development of the areas to which the chiefs who bestowed the titles on them wield authority over or for a feat they have achieved in their pursuits or careers.

Examples of such honorary chieftaincy titles abound in Ghana. For instance, Roland James Moxon( popularly known as Jimmy Moxon), a British civil servant who served as a District Commissioner in Gold Coast was enstooled a Ghanaian chief with the title Nana Kofi Onyaase. He is on record to be the first Whiteman to be enstooled a chief in Ghana.

From records, he was honoured with the title because of his dedication to community service where he among other things encouraged Ghanaian farmers to concentrate on food crops production, a decision that saved many lives because Ghanaian farmers at that time were in the production of cash crops to feed foreign countries to the neglect of food crops. Lisa Raye, an American actress, model and entrepreneur was also enstooled a queen mother in the Agona Kwanyako traditional area in the Central region.

The Akwamuhene, HRM Odeneho Kwafo Akoto III honoured Michael Jai White, a Hollywood actor with the title Odupong of Akwamuhene. Isaac Hayes, a famous African- American singer of the 1970's was enstooled a sub-chief for development at the Ada Traditional Area under the stool name Nene Katey Ocansey I in 1992. For her numerous years of service to vulnerable people around the world, Julia Morley, the Chairperson of Miss World was honoured with chieftaincy title Maame Esi Akomaso Nkosuohemaa I for Bosomtwi Traditional Area.

Nyab Guma Naa Fuseini Nayi, chief of Kakpag- yili Traditional Area in 2019 conferred chieftaincy titles Mal- Zal Naa( development chief) and Zosimli (Chief of friendship) to recognise them for their humanitarian support for the youth of KaKpagyili on the two chairpersons of EMpower foundation, a global philanthropic group focused on youth. The Ghanaian footballer, Asamoah Gyan, Ghanaian Hilife music icon, Amakye Dede, Mr. Kennedy Agyepong etc all have honorary chieftaincy titles from traditional areas they don't hail from but have played a significant role in its development or solving a problem therein.

The president of Ghana, Nana Akuffo Addo is a recipient of many of such honorary chieftaincy titles. Without a dot of doubt, almost every traditional area in Ghana has a specific good reason to celebrate and honour him. What is more refreshing is that even in his days as a leader of a political party in opposition, he was accorded some titles. In September 2016, the chiefs and people of Chakalia Traditional Area in the Upper West Region honoured Nana Akuffo Addo with the chieftaincy title " Kanyiri- Naa"( Chief of Patience).

In a colour ceremony, at the palace of Bulenga Naa, Naa Seidu Abdulai Nawologmo, Paramount chief of the Chakalia Traditional Area stated that he decided to honour Akuffo Addo with the chieftaincy title for his level of Patience. According to Naa Abdulai, Nana Addo is a true statesman and lover of peace for how he accepted the verdict of the Supreme court on the Election Petition and urging his supporters to accept it despite the fact that he disagreed with it. In November 2016, the chiefs and people of Afife Traditional Area in the Ketu North of the Volta region bestowed the chieftaincy title " Torgbui Dunenyo Dxigbodi I".

After conferring the title on him, the president of the Afife Traditional Area, Torgbui Adzaklo V stated that the chieftaincy title was conferred on Nana Addo as an honour for his contribution to national development, justice and a peace lover he has been over the years. " You have exhibited a total commitment to peace, patience, selflessness, transparency, accountability, incorruptibility. In this regard, we confer on you the title Torgbui Dunenyo Dzigbordi I". Torgbui Adzaklo said.

Torgbui Adzaklo added that the decision of Nana Addo to resort to the use of the court and not violence in the aftermath of the 2012 elections and his acceptance of the verdict despite disagreeing with it was ample evidence that he loves Ghana. He furthered that Nana Akuffo Addo resorting to the court as against the use of violence to settle issues he had with the 2012 elections was a demonstration that he is a man of peace because, in the other countries, opposition leaders have charged their members to take their law into their own hands in times like that.

In April 2017, the president of the Ngleshie Traditional Council, Nii Kojo Ababio and his council of elders enstooled Nana Akuffo Addo under the stool name Nii Kwaku Ablade Okogyeaman I which means a warrior who fights to rescue people from their predicaments. According to him, he decided to honour Nana Akuffo Addo with the chieftaincy title for his fight for human rights over the years.

The President was also enskinned as the Lebgimsim Naa( Development Chief) by the overlord and King of Mamprugu, Nayiri, Naa Bohagu Abdulai Mahama Sheriga in his palace on Saturday, 21st July 2018. In a statement read on behalf of the Nayiri by Chief Tagana, Nayiri stated that the conferment of the chieftaincy title on the president is a recognition for his unending desire to see Mamprugu in particular and Ghana, in general, develop which is spectacular and this has seen him initiate and implement many pro-poor policies, programs and interventions.

He also added that it is to celebrate the president for the honour done Mamprugu for making a son of Mamprugu his vice. The Nayiri also thanked the president for the progress of work so far on the Nasia- Janga road and accepting his petition for the creation of the North East region and acting promptly upon it.

He was also enskinned as the Aniwoba Naa(Chief for the poor and vulnerable) by the paramount chief of Fumbisi, Nab Clement Akanko Anyatiuk on Wednesday, 14th August 2019. Nab Clement Akanko Anyatiuk after the enskinment made it known that reason to confer the title on the president is a recognition for his pro-poor policies that are geared towards alleviating the sufferings of the poor. The chief catalogued the Free Senior High School Policy, planting for food and jobs, Nation Builders' Corps(NABCO)

Another Kingdom that honoured President Akuffo Addo with a chieftaincy title in Dagbon. The King and Overlord of Dagbon, Yaa- Na Abukari Mahama I on Saturday, November 16, 2019, the day of the 2019 edition of Damba celebration conferred the title "Dagbon Malti Naa Abudani I on President Nana Akuffo Addo as a recognition for the enormous role he played in bringing lasting peace to Dagbon.

The Yaa- Na in his coronation ceremony on 25th January 2019 stated.'' We have just emerged from a crisis that began almost seven decades ago, thanks to your government's unrelenting efforts in helping us to resolve our succession crisis. I want to express the gratitude of the chiefs and people of Dagbon to your Excellency, President Nana Addo Dankwa Akuffo Addo for the great role played by you and your government to get us where we are today".

The President in his concluding remarks in the same ceremony also opined " I am neither Abudu nor Andani, I am Abudani, a person who stands for unity, reconciliation and progress in Dagbon". Frank to the point, the President, Nana Akuffo Addo since assumption of office have fought hard to see the Dagbon Crisis resolved. Evidently, in September 2018, when the Northern Regional House of Chiefs visited him in the Jubilee House, he never minced words when he said to them " It is over 15years since Dagbon has been going through all these unnecessary problems.......

Peace in Dagbon doesn't just involve Dagbon, it involves the whole of Ghana, it is a matter of high national priority that we get Dagbon stabilized. He pleaded with the chiefs to use every means possible to resolve it and assured them of his government's support to make it possible. It has been his yearn to see the 2019 edition in Dagbon in Yendi celebrated with a new Yaa Na. In the same meeting, he told the chiefs " I would love to see this year by the time of the Damba festival, there is a new Ya- Naa in Yendi and so I am counting on you very much".

The president was also honoured with the chieftaincy title, Yenawurawura( Say and do chief) by the Overlord and King of Gonja, Sulemana Tuntumba Jakpa I. The Overlord who had his speech read for him by Mr. Bakari Nyari was full of praises and appreciation to the President for his political will and commitment demonstrated in the creation of the Savannah Region.

He added that it has been the dream of the people of Gonjaland to have a region on their own and he is very happy with how the president has swiftly dealt with their demand. He said the President did not sweep their petition on the creation of the Savannah region under the carpet but have acted upon it with all the urgency it needed.

NDC Member In Asawase Constituency Switch To NPP
18 minutes ago