Even Lagos is enforcing its Law on the ban on Okada. 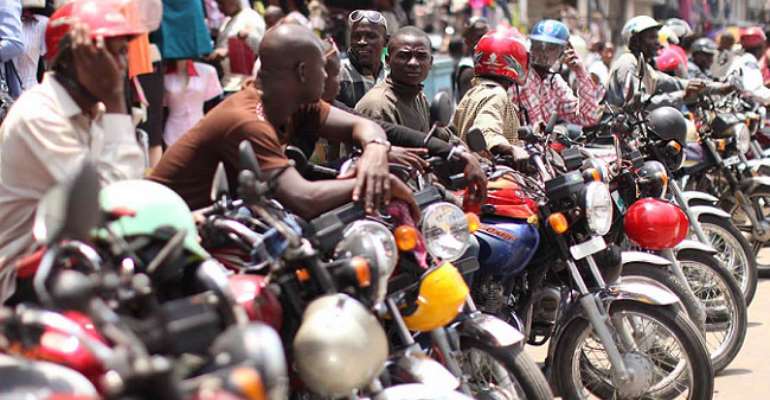 Last Friday I was shocked when I was crossing the road in front of the Police Headquarters at Cantoments. When the traffic light turned red and all the cars stopped, I saw a motor bike approaching. I was already three steps in the road so I was lost; whether to return or continue crossing the road. But to my surprise the motor rider stopped. At this time I was in the middle of the road but the temptation of turning to look at the rider to make sure he had really stopped was too high. He had stopped but my amazement had doused when I realised he was wearing a white skin.

In that instant, all my experiences with Okada drivers were flashing in my mind. I have never boarded one so I have no experience of the convenience this form of transportation brings. Though I don’t doubt it.

On numerous occasions, I have met Okada drivers on the pavement of roads where pedestrians and cyclists are supposed to use. More frightening is that, the motorists could be coming from your back or meandering through people towards you from the front on top speed.

I’m always scared when I find myself in that situation; whether at the Kwame Nkrumah Interchange (Circle) or Kaneshie. Whenever I have to cross the road through halted cars because of traffic, I am always alert for an unannounced Okada driver who thinks the traffic lights are a waste of resources. Sometimes you see police personnel at the back of these motorbikes. Other times the police personnel show absolute contempt to the traffic lights when on these motorbikes. Who then is to check the Okada driver?

No wonder the Head of the Accident, Emergency and Orthopedic Department at the Korle-Bu Teaching Hospital, Dr Frederick Kwarteng was vehemently calling for the ban of Okada in January this year. His call was premised on the fact that 58 motorcycle accident victims were recorded in the hospital from December 21, 2019 to January 1, 2020. He added that this is “causing the victims to lose their lives, legs and arms, brains, wealth and entire social life.” On the 15th of January this year, the Daily Graphic in an editorial indicated that 732 people died through Okada accidents in 2019.

Before I even continue, Okada is banned in Ghana. Section 128 (1) of the Road Traffic Regulations, 2012 states: “The licensing authority shall not register a motorcycle to carry a fare paying passenger.”

However, regardless of the growing menace that these motorbikes pose, some Members of Parliament- Muntaka Mubarak leading the pack - have been opposing the ban because according to them, the Okada business is putting “food on the table” of the riders. This is a genuine reason enough but the negligence of the same people who are supposed to create jobs for the people are now pushing for the legalization of a menace because it favours their Parliamentary seats.

I make this claim because of the assertion that the legalization of Okada will help our effort to “Industrialise” by assembling motorbikes and export them to the West African sub-region. This is just rhetoric.

Imagine how we are going to assemble motorbikes for the sub-region when we have folded our arms for Neoplan Ghana Limited to fold up. The National Democratic Congress (NDC) absolutely neglected a company that have or had the potential to employ thousands of youths and also solve our transportation problem by producing buses for public transport. The current government confuses me. Neoplan needs to be saved but the government is pushing for a so-called industrialization agenda that doesn’t seem to recognize how important saving the company is.

The MP for Asawase, in his spirited defense for the legalization of Okada in March 2019, indicated that most people use these motorbikes because they want “to get through the thick traffic of the cities to get to their destinations in good time.” Is that the best way we can solve the problem of traffic congestion?

He also advocated that Accra should emulate Lagos, the Nigerian city, which can be described as the market leader in Okada in West Africa. Lagos, it must be said had made Okada illegal the same year Ghana had also decided to criminalize it- 2012.

But political expedience had prevented the city of not less than 20 million people from enforcing the law. On 1st February 2020, Lagos started enforcing the ban to “immediately address the chaos and disorderliness created by illegal operations of Okada…”

I think we must rather emulate Lagos in this vein. Even though the process through which the ban is being enforced in Lagos is fraught with mistakes as some have described it as a “rushed decision,” we can learn from their mistakes and phase this illegality and nuisance out gradually.

I intentionally didn’t mention the criminal activities that spur with the use of these motorbikes. Currently, the cons of the Okada business outweigh the pros. Youthful lives are being snuffed and that cannot be tolerated any longer. The appropriate authorities must enforce the law and eschew political opportunism in this worrying situation.

We can't continue to be naked, let's produce our own covid-1...
25 minutes ago