Are The Mbororo Against The  Independence Of Ambazonia? 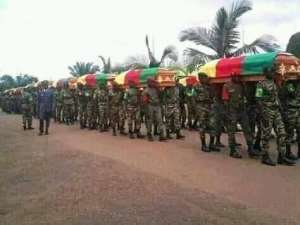 On 14 February 2020 armed bands of Fulani invaded the Fonfuka subdivision, Northwestern Cameroons and slaughtered all men they could find. The same day, an armed vigilante group created some pro-government elite in Donga and Mantung Division to establish a state of terror in the Ambazonia independence restoration struggle slaughtered 48 people in Ngarba, Ntumbaw Subdivision. Most of the victims were young men, the old and pregnant women.

Recently, the Fulani populations in some divisions of the northern part of the nascent Federal Republic of Ambazonia have been seen fighting alongside soldiers from the Cameroun Republic to stop the English speaking people from assuming their self-autonomy.

The first Fulani or Mbororo came to the western part of German Kamerun in 1904. The Mamada family arrived and were settled on an empty piece of land that abuts Bambili, Nkwen, and Mendankwe by Bambili after handing 14 bulls to the Fon of Bambili. In 1933, the British district colonial officers issued a certificate of occupancy settling the boundaries between these four communities and the Banjah hunters.

All other Fulani families came to the northern part of Ambazonia after the 1961 reunification of the German Kamerun. President Ahidjo settled his ethnic Fulani brothers on the green Grassfield to graze their cattle. Ahidjo also used the Fulani to claim lands and adulterate the homogeneity of this Christian and animist population.

Recently, these Mbororo have forgotten their temporal status in the region and tried to claim ownership of most villages in Northern Ambazonia. When the Ambazonia struggle started, the Mbororo were first indifferent.

Do these Mbororo imagine supporting CameroUn troops in destroying the northwestern civilizations would give them ownership of the lands?

It is a wrong decision for the Mbororo to abandon their customary hosts and instead ally with enemies to loot, burn and kill.

As a human rights campaigner, I abandoned my Christian Banjah brothers, who speak the Meta' language that I understand, to fight for the rights of the Mbororo and Muslim community of Banjah. Even the Mbororo Social Cultural and Development Association (MBOSCUDA) advocating for the Mbororo, abandoned the Mbororo of Banjah.

Human rights are universal. As such, I believed the Mbororo of Banjah had a right to some living space in Bamenda, thousands of kilometers from their origins in the Fouta Njalon in West Africa. Just as we recognized their right in the North West to live and graze their cattle, the Fulani of North West should not deny their hosts their right to belong to a nation.

It is a right enshrined in the statutes of the United Nations that people could change the name of their country, settle in a different country or found a new country.

CameroUn Republic is a pariah state to violate the fundamental principles of the United Nations and elect to kill Ambazonians and destroy their civilization and aspirations.

Mbororo leadership and elite should educate their people that no dictatorship has ever succeeded in quelling the aspirations of people. Sooner than later, the Federal Republic of Ambazonia would be recognized by the community of nations and would have a right to prosecute those who killed and destroyed Ambazonian communities. Ambazonia would never be part of the CameroUn Republic and CameroUn Republic would never stop AMBAZONIA from asserting their autonomy.

Mbororo must choose where they belong.