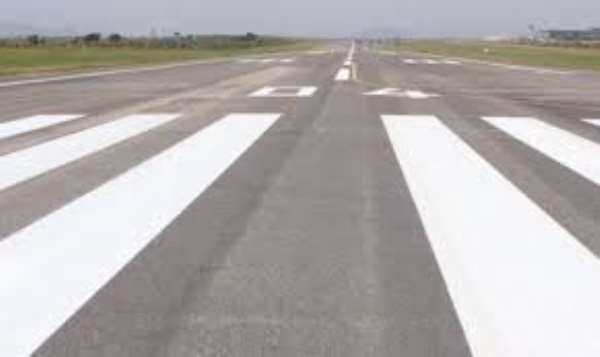 The Navrongo Youth Agenda for Development (NaYAD) wishes to commend His Excellency the President of the Republic of Ghana, Nana Addo Danquah Akufo Addo for his noble plan to upgrade the Paga Airstrip into an airport for the Region. We extend commendations to the MP of Navrongo Central and Minister of Aviation, Hon Joseph Kofi Adda for the efforts made so far. The Upper East Region deserves a befitting airport and the plan to upgrade the airstrip to one is welcoming news.

The Upper East Region, one of the deprived regions of Ghana deserves a fair share of the national cake. Arguably, it is one of the smallest regions but with several dialects. Almost a mile or two from one town to another, one is bound to encounter a different dialect or language for that matter. Like the city of Babel in the bible where God confounded the language of the people, the effect was a confusing between the people who could not unite to raise up the tower of Babel, their strategic objective that was to get them closer to God.

As if the city of Babel, Upper East Region suffers similar fate in its strive to get development. This is a region of numerous tribes that seemingly makes it difficult for its people to understand one another as every tribe becomes suspicious of the other. The only language that unites the people in any development discourse in the region is the Whiteman’s English which also poses a bigger challenge in how people appreciate issues.

This attitude manifested itself in recent times, when the hanker to have an airport in the region gathered momentum given the fact that air transport has made travelling quite faster, easier and relatively stress free. Also, most regions of Ghana including the Upper West Region, which shares identical problems such as bad roads, poverty among others with the Upper East Region have airports except the Upper East Region.

The sad reality is that the region has a very beautifully decorated sign post pointing to a piece of land as a site for Bolgatanga Airport at Anateem in Sumbrungu which is purportedly relocated to replace a 78 years old Airstrip at Navrongo. There is in fact a non-existent airport in the Upper East Region. Even with this, the citizens of the Region who have the means to travel by air, gladly travel by road to Tamale Airport to fly to various destinations in the country. All other trips to the region through flights terminate at Tamale airport and then followed with a two hour journey by road to the region.

The debate of the need for an airport for the region is admittedly a noble one. However, this debate has in recent times taken a different turn. It has become a debate about where the airport should be located with Hon Kofi Adda enduring several attacks on his person by some members of BONABOTO especially one Stanley Abopam. Quite interesting too, is a call by a renowned member and National President of BONABOTO, Dr Andrew Akulaa to all well-meaning citizens of the region to resist the relocation of a non-existent airport by the Minister of Aviation Hon Joseph Kofi Adda to Paga. In a press release to the GNA, Dr Akulaa is quoted to have said that all regional airports are sited at regional capitals hence the Upper East Airport should be in the regional capital, Bolgatanga.

The attacks on Hon Kofi Adda reminds me of the story of the man who slapped his son and questioned him whether he was going to kill a foal (baby donkey) that the son expressed interest in riding if the jenny (the mother donkey) does give birth to one. Honourable Adda is being attacked for riding a foal that never was given birth to.

It is sad that we seek to do this to our own who is putting in all the energy to deliver an airport to the region. Irrespective of where the regional airport is located in the region, it certainly will not only be closer to the citizens of the region than Tamale airport but also, will add to the development infrastructure of our region.

We call all citizens of the region to rally their support for the Hon Minister of Aviation Hon Joseph Kofi Adda in this enterprise of delivering to us a befitting airport for the region. Hon Edward Salia did it for Upper West, Kofi Adda can do it for Upper East. The success story of Upper West getting a new regional hospital in addition to the old one as well as the a Regional Airport is a function of a united people who placed their priorities right and coordinated efforts towards achieving them. We in Upper East may want to learn from our counterparts from Upper West.

We in the Upper East Region unlike our counterparts had the unpleasant experience of demolishing an existing hospital in order to build a regional hospital because it must be in the regional capital. We could have added an entirely new regional hospital to the old one even if it meant locating it in any part of the region.

The debate about where the Upper East airport should be located therefore should not be an issue. What we need is an airport in the region and if upgrading the Paga airstrip can help it; we ought to receive the news as welcoming. Once again, we commend Hon Adda and pledge our unwavering support for him as he strives to bring the plan of the President to upgrade the Paga airstrip to an airport to fruition.