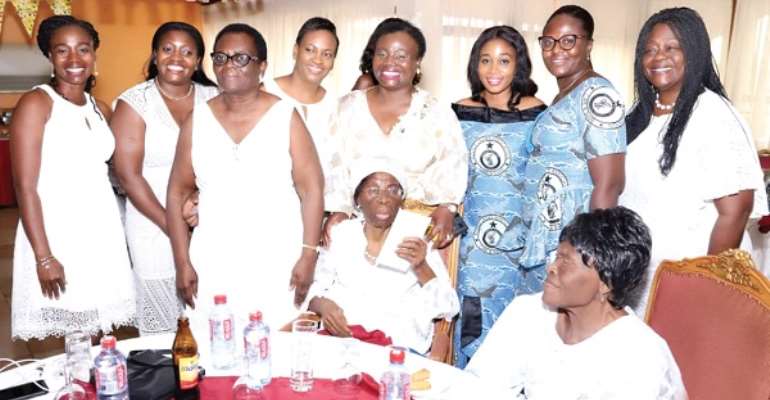 The first Ghanaian woman to be enlisted into the Ghana Police Service, then the Gold Coast Police Force, has turned 90.

Police Woman One (PW/1) Rosemond Asiama Nkansah, together with 11 other women, was enlisted into the Gold Coast Police Force on September 1, 1952 at the age of 22.

Before then, the police force had been male dominated since its establishment in1894.

Members of the Police Ladies Association (POLAS) and retired female police officers joined family members of PW/1 Asiama to celebrate her 90th birthday at a ceremony in Accra.

Two out of the five surviving colleagues graced the occasion while another who lives in the UK sent well wishes.

Addressing the gathering, Commissioner of Police (COP) Mrs Jane Donkor (retd), who was also the first policewoman to attain the rank of a police commissioner, said PW/1 Asiama and her colleagues worked very hard to pave the way for women to excel, with some attaining higher heights in the service.

Forbidden to marry
COP Donkor (retd) said it was on record that during the time of the first 12 women in the service, they were forbidden to marry or get pregnant and were compelled to resign if they wanted to go contrary to that directive, and that led to the resignation of some women who joined the service after the first 12.

Mrs Donkor said after serving for five years and nine months, PW/1 Asiama decided to marry so she resigned, “but thinking that women were not being fairly treated as their male counterparts who were allowed to marry and bear children, she decided to do something about it before leaving”.

Before her resignation on May 16, 1958, PW/1 Asiama petitioned the administration and the clause was removed; thus allowing women in the service to marry and bear children and causing those who had resigned to start their families to be reinstated.

President Nkrumah
According to Mrs Donkor, Ghana’s First President, Dr Kwame Nkrumah, saw the need for the inclusion of women in the police force and gave his assent to recruiting women, which became the nucleus of a new branch of the force.

After three months of intensive training, PW/1 Asiama, together with her 11 squad mates, passed out on December 1, 1952.

Mrs Donkor indicated that the first 12 policewomen lived up to the expectations of President Nkrumah throughout their years in the service.

More policewomen
At the ceremony, the nonagenarian was happy about the increased number of police women in the service and that one of them became the first acting Inspector General of Police (IGP).

PW/1 Asiama said although they worked very hard to pave the way for more women to be enlisted into the service, they never anticipated that policewomen would excel this far.

“It is heart-warming to hear that a policewoman acted as the IGP while others are now commissioners and deputy commissioners, as during our time the highest rank for women was Assistant Commissioner of Police (ACP),” she said.

The Director-General of Welfare of the Ghana Police Service, COP Mrs Maame Yaa Tiwaa Addo Danquah, who led the POLAS team to the ceremony presented an undisclosed amount of money to the celebrant and expressed the appreciation of all women in the police service to her for fighting to lift the ban on marriage placed on them.

She said currently, policewomen excelled in all endeavours and a number of them had won both local and international awards, while those on peacekeeping duties outside the country had also been recognised.

COP Addo Danquah said from a humble beginning, the number of policewomen in the service had increased significantly to 9,525 as of the end of 2019.

About PW/1 Asiama
Before her enlistment, PW/1 Asiama was a holder of Senior Cambridge and Teacher’s Certificate 'A’ and taught briefly before joining the police force; so after resignation, as a professional teacher she went back to the teaching profession and taught at St John’s Grammar School from 1961 to 1964.

Thereafter, Ms Asiamah joined the Ghana Broadcasting Corporation (GBC) in 1965 and was in charge of school broadcasting programmes for a year.

She retired and became a full-time housewife trading in building materials until she retired from active service in 1999 and devoted her time to writing books, translating words in her book Octagon into both foreign and local languages.