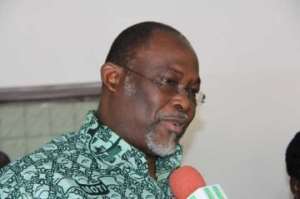 The Patrons for Peace and Democracy, (PPD), has taken a swift swipe at the former Minister for Trade and Industry, Dr. Ekwow Spio- Garbrah over his recent comment that the Mahama administration built 1000 factory, describing it as “irresponsible” and should be ignored.

“We consider Dr. Spio Garbrah’s comments are a desperate one with no iota of truth and we are calling on all well-meaning Ghanaians to treat it with the contempt it deserves.

According to a statement issued by PPD, made up of eminent people in the country, in Accra and signed by the group leader Dr. Richard Danso has challenged the former Minister to list the 1000 factories he claimed the Mahama administration has established, what are their locations, how many people have these factories employed, which power generation were these factories using, what conducive environment did they create for these factories to strive on.

“He should stop throwing dust into our eyes because If you claim you have built 1000 factories, that should automatically scale down the unemployment situation we have in this country, but what do we see now….

“It is interested to note that, how can you create 1000 factories in the wake of a persistent power outage, where most businesses collapsed especially small scale enterprises ie barbering shops, hairdressing salon, among others. This even leads to massive job losses in the country. How did these 1,000 factories survive under this power crisis”, the statement said.

“We consider his comments as irresponsible, because if you claim you have built 1000 factories, then the country should not be at where it is now.

After spewing lies that they created 1000 factories he could as well told Ghanaians how many factories they have collapsed”.

The statement said;” he should also tell what they used the EDIAF now EXIM bank money on for the eight years period that they were in power.

What is he trying to achieve with this unsubstantiated comments, is it because we are in an election year or what…, the statement said.

He cites how most of the factories secured funding and support from government agencies like the National Board for Small-Scale Industries, Export Development Bank as well as Microfinance and Small Loans Centre (MASLOC).

He said the New Patriotic Party’s One-District One Factory Programme pales in comparison to the over 1,000 factories created under former President Mahama.

“If you are trying to look at whoever built factories and employed people, we did far more than anything the NPP has done so far,” he told 3news.com’s Komla Klutse on the sidelines of the 31st December commemoration in Winneba, Central Region.

Museveni apologises over son's Twitter rant on Kenya
8 minutes ago

Paramount Chief of Bunkpurugu commends Bawumia for his good ...
17 minutes ago