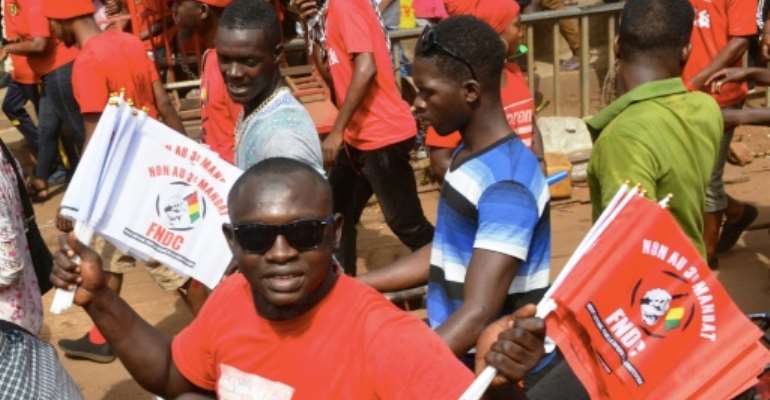 Guinea has been hit by demonstrations since mid-October over concerns President Alpha Conde plans to reform the constitution to stay in office for a third term. By CELLOU BINANI (AFP)

Guinean opposition parties on Tuesday confirmed they would boycott upcoming elections, allowing a registration deadline to pass, the day after fresh anti-government protests.

The West African country has been hit by rolling demonstrations since mid-October over concerns President Alpha Conde plans to reform the constitution to attempt to stay in office for a third term.

"The conditions for a transparent election are not there," he told AFP, demanding an overhaul of the electoral rolls, a proper voter census and a "less biased" election commission chief ahead of the long-delayed February 16 ballot.

"We will prevent these elections," Diallo said, repeating a previous vow.

The electoral commission CENI said 29 parties had registered their lists including Conde's Rally for the People of Guinea.

None were associated with widespread suspicions that Conde, who announced a draft constitution last month, wants to stay in office for a third term.

CENI chief Amadou Salif Kebe said his team was nevertheless "determined to hold the elections on the planned date of February 16, 2020, because we are technically and materially ready."

On Monday, violence between rival groups injured at least 12 people in the east of the impoverished former French colony as large protests swept the country.

About 20 people and one gendarme have died since the protests began in mid-October, according to an AFP tally.

Conde is a former opposition figure himself who was jailed under Guinea's previous authoritarian regimes.

He became the first democratically elected president in 2010. Under the present constitution, presidents are limited to two terms in office.