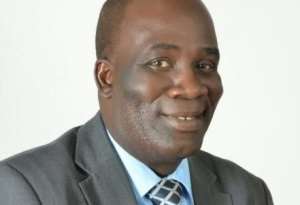 Most often, public office holders abuse their office by putting their interest way ahead of Ghanaians, a practice that has often led to corruption.

It is in this direction that the Institute for Energy Security (IES), has sent a strong word of admonition to the newly appointed Managing Director of the Tema Oil Refinery (TOR), Ing. Herbert Ato Morrison, to 'THINK GHANAIANS FIRST' in all his dealings as he takes over the management of the refinery.

Commenting on the state of the refinery going forward, the Executive Director of the Institute for Energy Security (IES), Paa Kwesi Anamua Sakyi said the new Acting MD must ensure that TOR only enters into arrangements that will yield the most benefits for Ghanaians.

“We all understand that Mr. Osei was forced to walk out. So we only pray and hope that he [Ato Morrison] is not elected to come and ensure that the refinery takes far below the tolling fee that has been put in the past to rip off the country. We wish him well, a very good engineer but in terms of management we are yet to see what he brings onboard and how forward-looking it is going to be for the refinery.”

The appointment of Mr. Ato Morrison follows the resignation of Isaac Osei, who served as the MD of the company for nearly three years.

A few days ago, Ing. Herbert Ato Morrison was appointed the acting Managing Director of the Tema Oil Refinery (TOR) following the resignation of Isaac Osei, who served as the MD of TOR for nearly three years.

A source at the refinery disclosed to Citi News that the mantle fell on Ing. Morrison who has served in the firm in excess of over 30 years to steer the affairs of the refinery post-Isaac Osei-era.

Until his appointment, Ing. Morrison was the General Manager, Technical Services and he is the senior-most engineer at the nation's sole oil refinery.

According to the Institute of Energy Security (IES) the recent resignation of the MD of TOR, Isaac Osei, was induced by persons who wanted him to approve a shady deal that would have cost taxpayers millions of dollars.

The energy policy think tank in a press release stated that its investigations revealed that Mr. Osei left his position after he refused to sign off a deal to refine 11 million barrels of crude oil at a cost of US$1.5 per barrel instead of a market rate of US$4.5 per barrel.

According to the statement, should TOR agree to the terms that were being imposed on it, the refinery would not have been able to recover its operational costs much less talk of making any gain on the transaction.