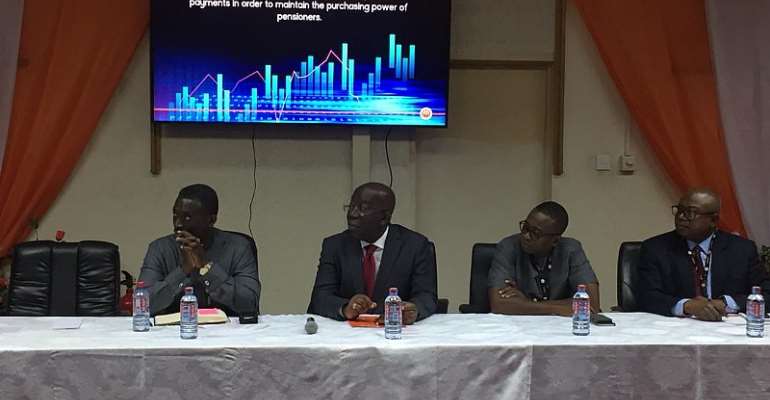 The Social Security and National Insurance Trust (SSNIT) has announced it will pay pensions in excess of GH¢ 243 million this yearp.

The amount represents an indexation rate of 11℅ for the year under review.

Chief Actuary of SSNIT, Stephen Yeboah, made this known at a press conference on Thursday, January 2, 2020, in Accra.

According to him, the 2020 indexation rate was determined using the percentage change in the annual average Consumer Price index for 2019, forecast of the National Annual Price Inflation, ability of the Fund to pay and the long term sustainability of the Scheme, among others.

The 11℅ rate is higher than the forecasted inflation rate of 8℅ for 2020.

According to the Chief Actuary, the overall indexation rate amount was redistributed at a fixed rate of 6.6℅ and a flat amount of GH¢ 37.38 for all pensioners on the SSNIT pension payroll as at 31st December, 2019.

He noted that with the redistribution, lowest earning pensioners will get an indexation rate of 19.06℅.

He added that 70℅ of pensioners will receive 11℅ or more as effective increase in their pension.

He revealed that 98℅ of pensioners will receive an effective increase equal to or above the targeted inflation rate for 2020.