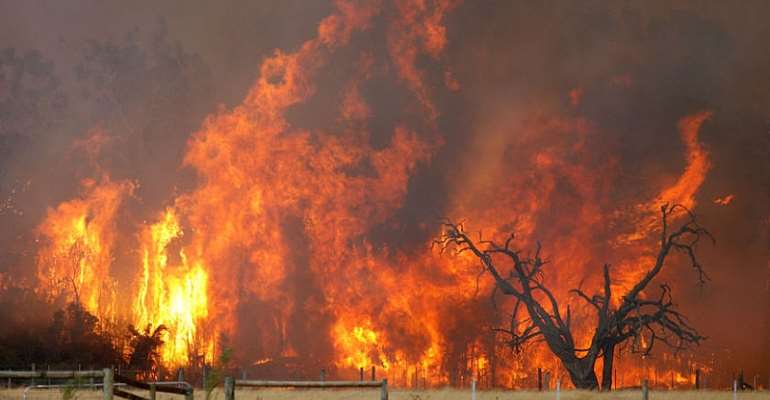 Some rice farmers in Northern Ghana are counting their losses as bush fire ravages hundreds of acres of their rice farms.

The Upper East, Northern and North East Regions, are the worst-hit regions as affected farmers attributed the situation to lack of combine harvesters and a ready market for their produce.

The farmers who experienced rice gluts this year but struggled to find markets for their produce fear rice production for the next farming season will be greatly affected if the government does not intervene.

Over 400 hectares of rice farms along the Fumbisi-Gbedembilisi-Yagaba rice valleys were completely burned by the fires.

Rice farmers who are still harvesting their rice during this dry season are compelled to compete for limited combine harvesters at an exorbitant fee to harvest their rice or face losing their produce to bush fires.

Some affected farmers spoke of their ordeals to Citi News with one saying, “[my farm] covered 52 acres. I harvested only 15. The rest got burned because of a lack of combine harvesters in the system. I lost GHS25,000 to GHS27,000.”

Another farmer said: “my rice got burned on the 23 of December this month. 47 acres that was ready for harvest got burned through bush fires so you can imagine the amount of rice I am losing.”

Apart from losing their produce to bush fires, fortunate farmers who have harvested their produce have to sleep in the valleys to protect their heaped produce from bush fires whilst others are compelled to store their produce in homes due to lack of ready market for the produce.

The rice farmers' debunked claims that neither the Buffer stock company limited nor rice millers have either bought all their rice or cannot get rice to purchase for milling purposes.

This situation caused for an emergency meeting of all rice farmers in the five regions of the North at Navrongo by the Peasant farmers association of Ghana (PFAG) to deliberate on recent challenges facing rice production in Northern Ghana and propose to government pragmatic solutions for redress.

Coronavirus: Also Quarantine Akufo-Addo Upon Arrival From Eu...
43 minutes ago