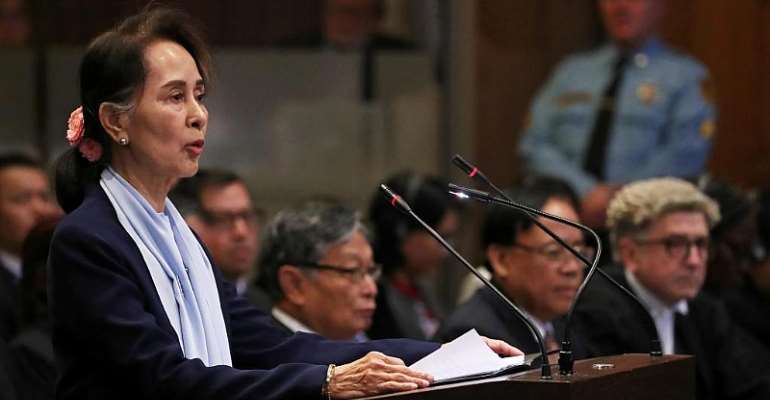 Former peace icon Aung San Suu Kyi has defended Myanmar's military against genocide accusations filed by the Gambia, telling the UN's top court that the claims were "misleading and incomplete."

Wearing traditional Burmese dress and flowers in her hair, Aung San Suu Kyi defended Myanmar's military operation against Rohingya Muslims Wednesday, telling judges at the International Court of Justice (ICJ) that there was no "genocidal intent".

"The applicant has brought a case based on the Genocide Convention. We are however dealing with an armed conflict started by coordinated and comprehensive attacks by the Arakan Rohingya Salvation Army (ARSA) to which Myanmar's defence services responded."

The military response in 2017 killed thousands and forced over 740,000 Rohingya Muslims to flee to neigbouring Bangladesh.

Suu Kyi rejected accusations that the operation amounted to an attempt to exterminate the Rohingya, but admitted that the army may have used excessive force.

"If war crimes have been committed," then its justice system would deal with them she added.

Proving genocide
The facts however are not on her side. "The evidence of the mass killings, of the rapes, of the destruction of villages, of the failure to hold anybody accountable are very clear," says Reed Brody, a human rights lawyer.

UN investigators last year concluded that Myanmar's treatment of the Rohingya amounted to genocide. However proving it in international law is notoriously difficult.

"You need to prove that not only a lot of people were killed but that they were killed with the specific intent to destroy a group as such," Brody told RFI.

Myanmar's lawyers, one of whom is William Schabas, the author of a book on genocide, acknowledged that bad things had happened, but insisted they were not enough to prove "genocidal intent".

"Ten thousand deaths out of a population of 1 million might suggest something other than an attempt to destroy the group," Schabas told judges.

Parallels with Rwanda
ICJ judges have only once ruled that genocide was committed, in the 1996 Srebrenica massacre in Bosnia.

However for the Gambia, the small west African state leading the charge against Myanmar, there is no doubt that a genocide was committed.

"I have spent a decade and a half interacting with the victims of the 1994 Rwandan genocide," Gambia's Justice Minister Aboubacar Tambadou said on the first day of hearings Tuesday.

"I could tell that these stories were very similar to the stories that I have heard in the past. And so I thought that this is not right, something has to be done about it."

On Tuesday, Tambadou urged Myanmar to "stop the genocide" of its own people.

"The bar is very high for Gambia," reckons Brody.
Defending the indefensible
"The court's jurisdiction here is very limited. It is not a human rights court, it only has jurisdiction if it believes a genocide is taking place."

Furthermore, this is a "court made up of former ministers who are very reluctant to interfere in the internal affairs of other states, so this is really a test case for them," said the human rights lawyer.

Suu Kyi and her team maintain that the court has no jurisdiction to hear the case and want it thrown out.

"The argument that Myanmar is making to defend the indefensible--'did you commit genocide or was it only ethnic cleansing?'--is a very narrow one," adds Brody.

For now, the Gambia has the backing of the 57-nation Organisation for Islamic Cooperation plus Canada and the Netherlands.

Gambia's case
Some observers however have expressed shock that a small country like Gambia with its own internal problems has been the one to take Myanmar to court.

Gambians have just capped one year of hearings about torture, murder, rape and witch-hunts carried out under former president Yahya Jammeh.

"I don't think the two things are incompatible," reckons Brody.

"As Gambians are looking at their own dark past, I think it's totally appropriate for them to be part of the international community that upholds human rights."

Once a human rights icon, Suu Kyi has shocked critics in her defence of the same military that for years kept her under house arrest.

No mention of Rohingya
Nonetheless, her appearance at The Hague has also galvanised supporters at home.

"She wants to show that she stands with the majority ethnic groups in Myanmar," in the run up to next year's elections, explains Brody.

"She didn't even mention the word Rohingya in her presentation, which is the policy of the government not even to recognize the Rohingya as an ethnic group."

In Myanmar, the Rohingya are widely regarded as illegal immigrants despite having lived in the country for generations.

"She is there to show back home how much she joins everyone else in her hatred of the Rohingya minority," Brody concluded.