AKOFENA: Debaters across Africa arrive in KNUST for 2019 PAUDC

Hundreds of debaters from various universities across the Africa continent have begun arriving on the campus of the Kwame Nkrumah University of Science and Technology (KNUST) today, 8th December to begin the 2019 Pan African University Debate Championship (PAUDC).

The 12th edition of the competition is under the theme; ‘Promoting the new African Narrative’ which was carefully chosen to reflect Africa’s growing shift towards a discussion that project a positive image of the African continent,”

The Pan-African Universities’ Debate Championship (PAUDC) is an annual debate championship, which brings together debaters from tertiary institutions in Africa to promote the culture of debate and civic participation.

The 2019 edition of the competition which is being hosted in KNUST has been named after an Adinkra symbol, AKOFENA which represents courage, valour, and heroism with regards to historical roots, geographical location and social reality among others.

Students from some universities in South Africa, Botswana, Nigeria, Togo, Zimbabwe among others have since arrived in KNUST campus and are currently going through the registration process.

This year, 650 debaters from 103 African Universities in 16 African countries are expected to compete for the ultimate trophy.

"I'm expecting a smoothly run tournament and I'm also looking forward to interacting and learn new things from students from other African countries especially those in Ghana," A participant from the Rhodes University, South Africa told Focus FM's John Essien in an interview.

Abdul Latif Wale from the University de Lome, Togo to John Essien that he wants more French Country representation in this year's competition.

"PAUDC has also been great and my expectation this year is to see more participants from Francophone countries doing very great,'' he said.

KNUST; who were winners in the 11th Edition which took place at the University of Dar es Salam, Tanzania will look to impress once again and defend their title.

The Local Organizing Committee of the “AKOFENA 2019” in conjunction with the Sports Directorate has worked for the past 9 months as part of the planning and preparations for the championship. The LOC comprised mainly student volunteers who are specifically assigned to different Units of the LOC to work on the day to day activities and programs.

AKOFENA 2019 has begun with registration and allocation of accommodation facilities to participants.

What to do During Registration 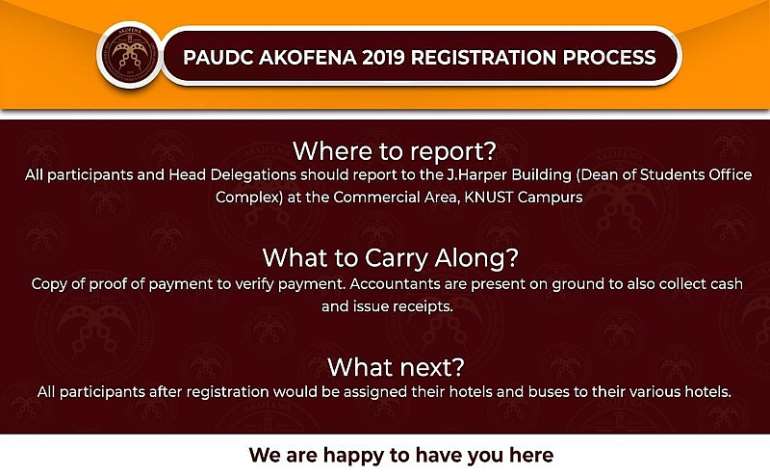 The competition will have an official opening on Monday, 9th December 2019 with interesting activities. 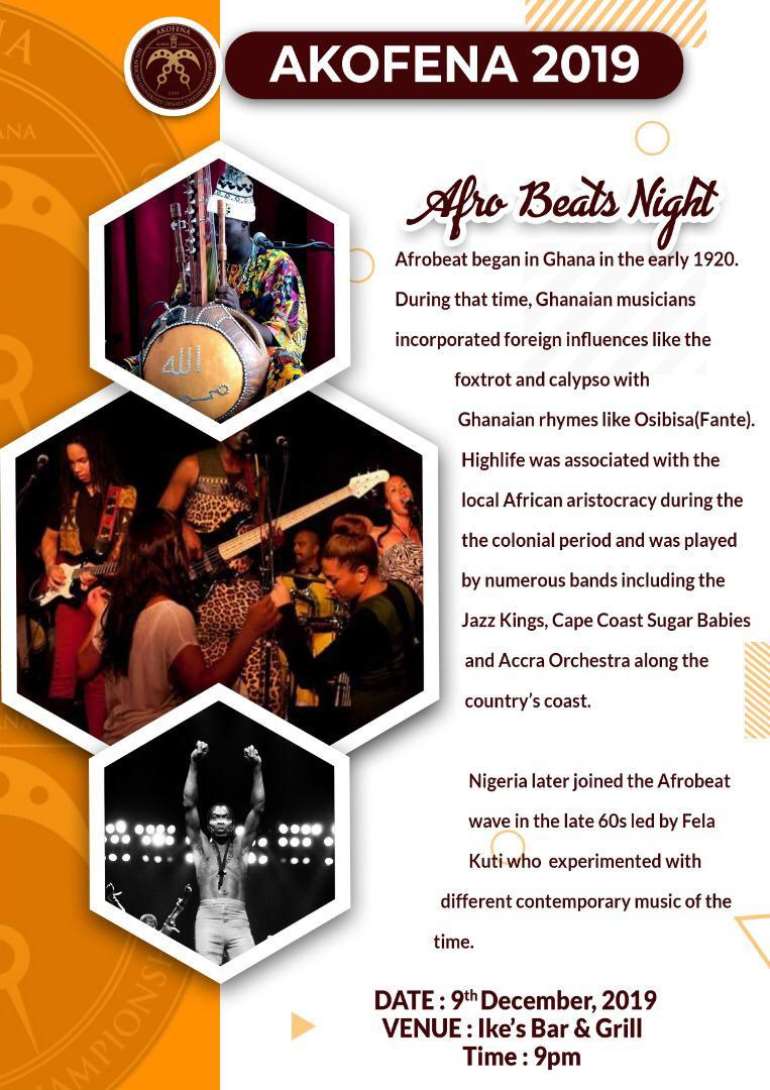 Line up activities for AKOFENA 2019 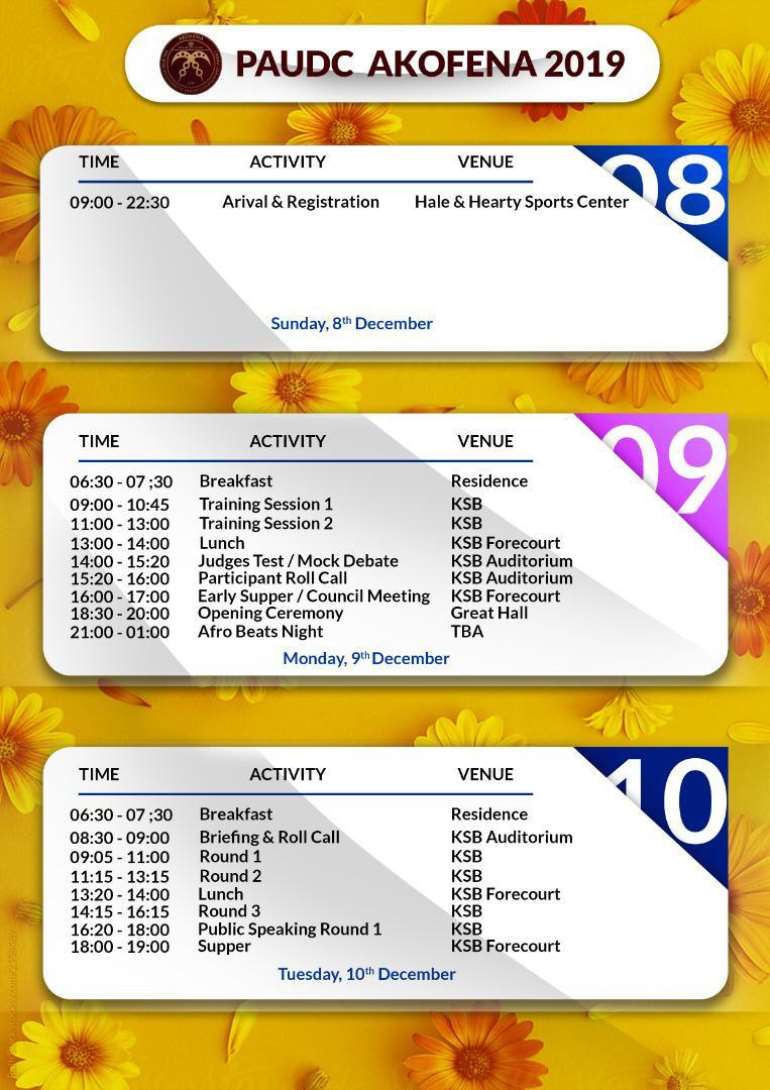 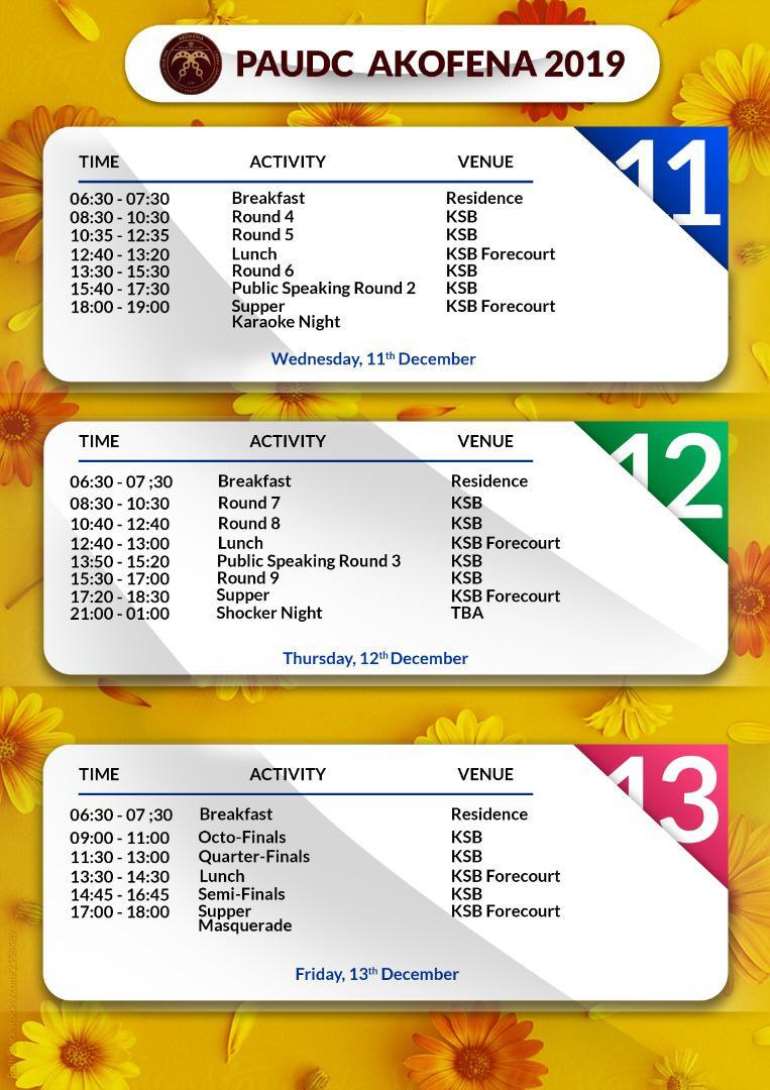 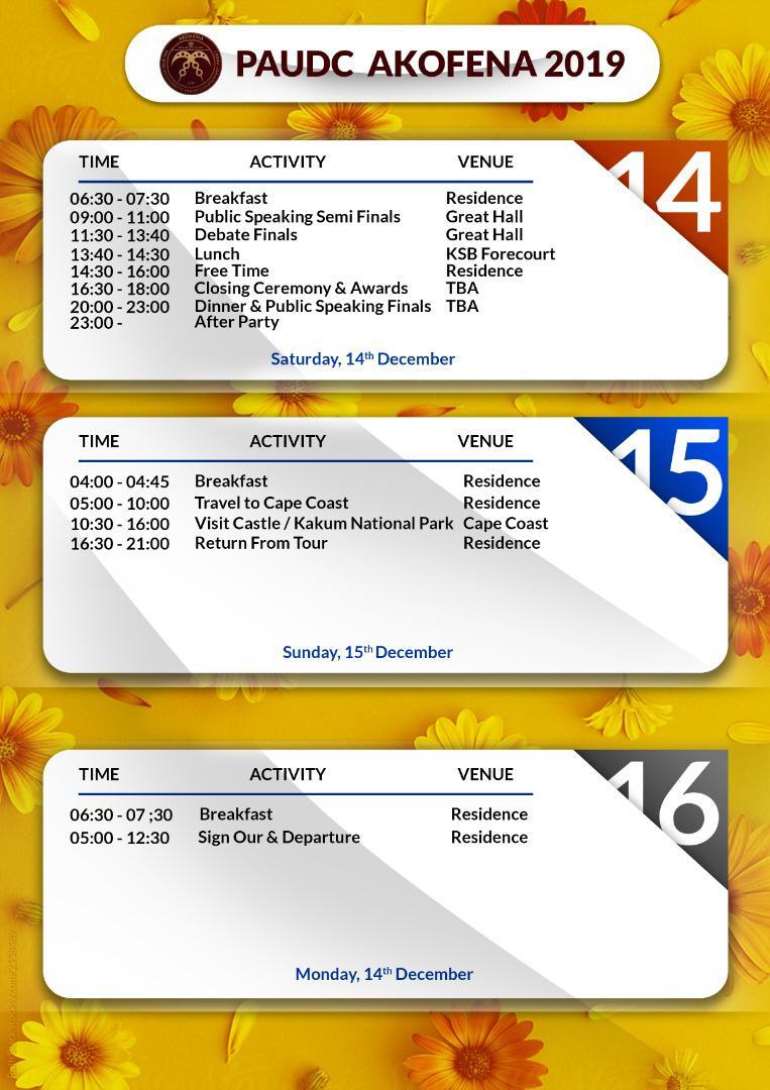 Mode of the PAUDC (AKOFENA) Debate
The Parliamentary debate is a limited-preparation event, meaning teams do not know the topic of the debate prior to the event. Teams receive a resolution, or topic, only 15 minutes before the round. They then have 15 minutes to prepare and discuss their side of the debate before entering the round. The debaters must have a thorough knowledge of politics, current events, modern philosophy and other topics vital to a well-rounded education in liberal arts. Teams have 7 minutes each to convince the judges they are experts on the topic they received.