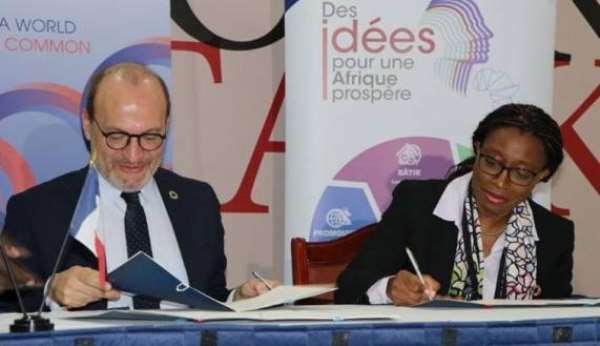 The French Development Agency (AFD) - represented by its CEO Rémy Rioux - and the United Nations Economic Commission for Africa (ECA) - represented by its Executive Secretary, Vera Songwe today signed a memoranda of understanding between the two institutions. With this MoU, AFD and ECA confirmed their wish to work more closely together on research areas related to Africa and some of its key challenges, including gender, migration and climate change.

The two institutions have, as part of the collaboration, conducted a joint study on the involvement of the private sector in the provision of climate and weather services in Africa. In addition, AFD and ECA - through its African Climate Policy Center - signed a research partnership agreement in November 2019, worth 80 000 Euro, for a period of one year.

With today’s MoU, the two institutions have agreed to add gender and migration as key priority areas to conduct research on.

Rémy Rioux, CEO of AFD declared: “ECA is a unique partner for reflection on Africa at the continental level. It is also the way AFD wants to consider Africa, as a whole, diverse continent constantly inventing itself.”

Vera Songwe, Executive Secretary of ECA for her part, welcomed the collaboration, saying,” the ECA’s focus is getting research ideas implemented to build a prosperous Africa that is consistent with the SDGs and Agenda 2063. An Africa able to confront major challenges, including climate change, gender and job creation.”

In addition to the signing of the agreement, Mr. Rioux and Ms Songwe participated in an engaging book talk event themed, ‘Reconciliations’. Hosted by the ECA, the discussion focused on Mr. Rioux’s new publication, which proposes reconciliation as a conceptual approach for collective action. According to the author, this approach is essential for tackling major development challenges. Present at the event were representatives from the Addis Ababa Diplomatic Corps, UN agencies and the African Union Commission.


About ECA:
ECA is a think tank whose mandate is to promote the economic and social development of its member States , foster intra-regional integration, and promote international cooperation for Africa's development. One of its core functions is conducting multisectoral research and analysis that nurture the integration of the three pillars of sustainable development, and promote peer learning, innovative thinking and the advocacy of public policies while fostering intersectoral linkages and synergies. Made up of 54 member States, and playing a dual role as a regional arm of the UN and as a key component of the African institutional landscape, ECA is well positioned to make unique contributions to address the Continent’s development challenges.


About AFD:
The Agence Française de Développement (AFD) Group funds, supports and accelerates the transition to a fairer and more sustainable world. Focusing on climate, biodiversity, peace, education, urban development, health and governance, our teams carry out more than 4,000 projects in France’s overseas departments and territories and another 115 countries. In this way, we contribute to the commitment of France and French people to support the Sustainable Development Goals (SDGs). www.afd.fr/en