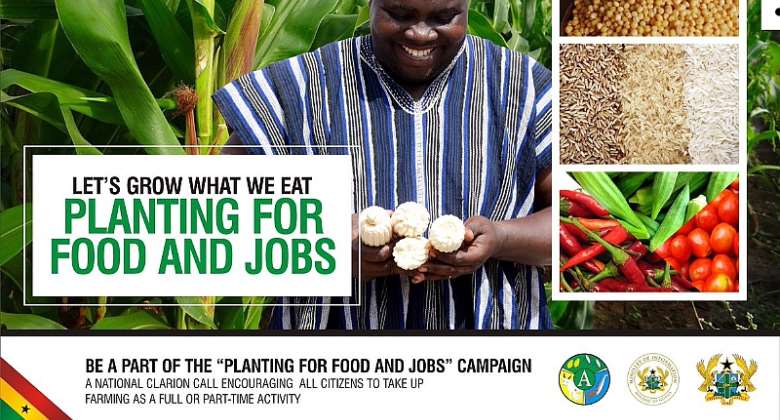 Why would a country where some 1.2 million SHS students are given one hot meal by the government and SHS boarding students are fed breakfast, lunch and supper by the government has no buyer for bumper rice harvest? Why would farmers in a country where free school feeding program is sponsored by the government have difficulties in marketing their farm produce? Can't government that feed these students, buy only made in Ghana rice and other local foods to feed the students? If government had a policy of "local foods for free SHS and school feeding program", no plantain or rice will go waste. We have planted for food, but jobs created for the producers must be sustained.

In the boarding schools in Ghana, the staple foods are made of rice and maize mainly. On the menu of most boarding schools in the country and the school feeding program in the basic schools, there are meals like corn porridge, rice porridge, cocoa drink and bread for breakfast, and kenkey, banku, yam ampesi, plantain ampesi, gari and beans, jollof rice, plain rice, rice balls and so on for lunch and supper. All these foods are sufficiently produced under the government’s flagship program, planting for food and jobs.

Government is highly recommended for introducing planting for food and jobs to feed its populace and give them jobs through direct and indirect ventures in the agriculture sector of the country. However, there have not been a complimentary policy to make sure that the abundant food does not go waste. Plantain go ripped and rotten on the open market, maize and yam farmers struggle to make sales of their farm produce, and currently, there are loads of rice piled up in the open market at the mercy of the weather and unharvested rice on farms waiting to be consumed by recurrent bushfires in the dry season that usually resume in December.

Whilst government have little control on what kind of rice its citizens consume in their various homes, it has a full control on what students eat in all feeding programs it sponsors. Government has control over the kitchens and canteens that feed public and civil servants on its budget. As a policy to promote consumption of local foods, provide ready market for the local farmers and sustain jobs in the agricultural sector, government can direct all institutions including schools that are fed by the government to include only local foods on their menu. The procurement board(s) in charge of the free SHS and school feeding program must take supervisory role to make exclusively local foods for government sponsored programs a reality. Many Ghanaians home and abroad applauded the then Minister-Designate for the Brong Ahafo Region, Evans Opoku Bobie in 2018 on how he related ready market difficulties for farm produce and the introduction of the free SHS and school feeding program. Since his words of assurance, considerable amount of the dividends of planting for food and jobs keep on going waste, and farmers become frustrated during harvesting. The then Minister-Designate had this to say,

“It is a fact that when you come to Agricultural value chain, what is missing is the marketing and so with the coming of the buffer company, that problem has been resolved in Brong Ahafo Region but going forward, I think that now that we have the school feeding program in place, we have the Free Senior High School in place, when approved by this committee, I am going to link the farmers to the school feeding secretariat and the Free Senior High School so that when they produce their yam, their beans, there will be ready market for them”.

In the meantime, government would facilitate the private sector investment in rice processing in the country and improve the quality to encourage consumption of locally produced rice. Government would also speed up the completion of the food storage facilities across the country, buy from farmers, store the excess produce and release it back onto the market during farming off-season period to check inflation during those times in the year. Also, as a policy, government can raise taxes on imported foods that are abundantly produced in the country, especially rice. High tax is economically preferred to outright ban as this may allowed space and time for the importers to begin to patronize the locally produced foods in order to sustain the jobs in their businesses.

Planting for food and jobs. The planting has been successful. The food is abundantly produced. The fear is that if the food has no ready market, people would be discouraged to plant and many jobs would be consequently lost. Then there would be a relapse into planting for food and jobs era. Planting to feed the huge population in the free SHS and school feeding program and various government institutions will sustain jobs in the agriculture sector.

Our SinoHydro road projects has silence NDC, when we talk th...
18 minutes ago

Let's go on our knees and pray for Akufo-Addo for God's inte...
45 minutes ago