The Project: Liberating Ourselves From Neo-Colonialism 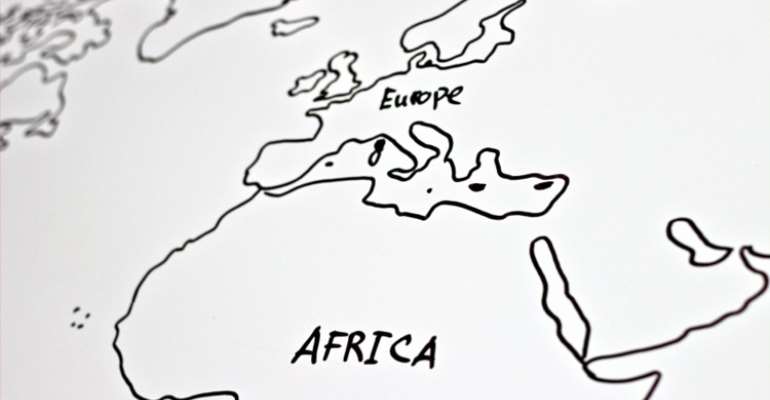 One brave woman has done more to shed light on the plight of Africans than most African academics and politicians had done within the last 50 years. Dr. Arikana Chihombori-Quao's impassioned and fearless denunciation of France's Colonial Tax and the exploitative arrangements imposed on its neo-colonies and the unfair, unequal, non-reciprocal and exploitative relationship imposed on Africa vis-à-vis the rest of the world has captured the imagination of everybody who has seen her viral videos. Many Ghanaians, I hope, are beginning to know for the first time why Dr Kwame Nkrumah gave Guinea-Conakry £10m in 1958 after the French destroyed everything before their departure when Sekou Toure refused to sign up to the Colonial Pact which enjoined the colonised to continue compensation to the coloniser. Of course, this obtuse logic, so it may appear to many, is nothing new France just invented but is germane to many exploitative societies the world over. Just to draw attention to some similar cases. The Haitians were forced to pay reparations to their former owners in order to be left alone and be allowed to trade with the rest of the West. Fiddler in the book Roots saved the cents he received for playing the fiddle in the abortive attempt to buy his own freedom. The slave in the Muslim household also paid compensation to his master for manumission. We should keep this in mind in subsequent explanations of the African imbroglio.

Many people are wondering why the leaders of the French colonies have not rejected or revolted against the pernicious order imposed upon them by France since their flag independence. There are reasons for that, as Dr Chihombiri-Quao has been pointing out but it needs further clarification.

The Social Origins of the New Leaders of Africa

Most of the French colony leaders were descendants of slaves and people from tribes the powerful African kingdoms were getting captives to sell as slaves or to work on their farms and mines. Dahomey stood out as such a prototype case but it was same in almost all of them. They and their children were elevated to their positions through enlistment into the Foreign Legion the French used to capture their colonies and later the colonial Administration. Their descendants became the modern elite in the French colonies, as the republican French sought to destroy the royal houses, appointing "warrant chiefs" from commoners over them. These people were subjected to the French brainwashing policy of assimilation with those who reached its apogee conferred with the accolade of assimile` and given the status of becoming French with no hyphen. Thus, they are no longer Africans. That this is something similar to suffering social death described by Orlando Patterson in his Slavery and Social Death was lost to these Africans. It certainly produced the African caricatures of white men the likes of Jean- Paul Sartre and Jean-Francois Bayart had the luxury to mock at. With such an origin and mindset infused in them, the new leaders in the French colonies were and still therefore very much subservient and grateful to their new French Masters whom they view as their liberators, protectors and, above all, soul mates. But wait a moment! That such a perverse situation became the norm for even those descended from the royal houses must not be lost on you when filing for the next Visa Lottery, queue for that visa, when you get your Greencard or naturalised as British, or woe betides you, you set up on Mungo Park across the Sahara Desert! After all, you too know that the house slaves eat better food and wear better cloths than the field slaves, don’t you? Besides, who can begrudge you of the desire to enjoy a little part of the vast wealth being siphoned from your country to the North? So, let us not be hypocritical about this.

As if it was not bad enough being brainwashed and subservient, the French are ready to crack the whip at the slightest sign of revolt by their protégés. What the French did to Guinea-Conakry in 1958 when Sekou Toure who was not a slave descendant but a scion of the famous resistant leader and slave trader Samory Toure and Babatu fame refused to sign the Colonial Pact, saw others getting cold feet. Some Ghanaians belonging to the UP tradition still accuse Nkrumah of wasting Ghana's reserves for coming to the aid of Guineans when the departing French destroyed extensively infrastructure in the country and placed a trade embargo on them, just as they did to Haiti in the C19th.

As this did not coerce Sekou Toure to recant, the subsequent overthrowing and killing of those who tried to break away like Olympio of Togo and others, made the rest to fall into line to this day. With French military bases located in all of them, it simply wasn’t worth the risk. The new military regimes made up of the mentally enslaved and brutal ex-legionaires the French used for their brutal rule in Africa and to commit atrocities from Vietnam to Algeria combined to seal any thought of dissent from the exploitative arrangements when the coup leaders, with not much education, took over in the French colonies.

The French Marxists and sociologists such as Claude Meillassoux have produced a copious amount of literature on the class origins of the Francophone leaders. His Class Analysis of the Bureaucratic Process in Mali, The Journal of Development Studies, Vol. Six, Jan. 1970, No. 2, is a good case study.

To some extent, many of the new and modern elite in the British colonies also have such a slave origin (either as scion of slaves, e.g., the early recruits into the colonial army and police, or slave traders, e.g., the mulatto class). Later, many with lower social status background or commoners with the benefit of missionary education joined the colonial administration and the army and the police. However, a larger proportion of recruits came from the emerging ruling aristocracy, thanks to the Indirect Rule system of the British to rule through the chiefs.

English scholars, however, had avoided such social status researches as the French scholars, focusing instead on ethnic or tribal origins instead of class or social status origins. They thereby created the myth or semblance of there being no classes in Africa which African socialism proponents also followed in their methodology. However, as Chief Obafemi Awolowo pointed out in his superlative Inaugural Kwame Nkrumah Memorial Lectures in 1977 at the University of Cape Coast, aptly titled The Problems of Africa, much of Africa before the arrival of the white colonisers and Western education was socially structured like caste systems, with very little social mobility in between. He observed that one effect of the slave trade in Africans was the warping of the mentality of Africans, a revelation we shall return to again and again in explaining the myriads of untold and unconscionable actions of the heirs to the colonial thrones in Africa.

The Project
It is now up to a new class of Africans, irrespective of class or social origins, to rise up against the New Collaborators with the neo-colonialists and liberate themselves and fellow Africans from the clutches of these brutal and insensitive exploiters who enslaved, colonised and exploited Africans and then tell them they had done them a favour, one being Christianising them! Of course, it was under the guise of the same Christianity used to justify the slave trade that King Leopold and the Belgians managed to kill over 10m Congolese, half the population then, within a matter of 23 years. But just as the French, with the assistance of other Western nations, forced the Haitians to pay them the equivalent of $21 billion reparation from 1825 to 1947 for liberating themselves from the yoke of enslavement, Africans and their descendants are being made to continue to pay forever for the supposed good things European colonisers had done for them! It is no wonder Liberia and Sierra Leone, nations formed by descendants of slaves, rank with Haiti at the bottom of the most deprived nations. C.R. L. James had captured the process of how that happened in his superlative The Black Jacobins which he mentioned he wrote with Africa in mind. And, Carter G. Woodson had bequeathed to us The Miseducation of the Negro to enlighten us about how the colonial (missionary) education leaves us ignorant; in spite of our level of education, our cosmology and cosmogony still firmly rooted in the ecclesiastical source of knowledge which falls under the primitive Weberian substantive rationalisation system quite incapable of comprehending the scientific and rational cosmologies that we need to emancipate ourselves from the mental slavery imposed on us and think critically to deal with the developmental challenges facing Africans. Franz Fanon had set the path in explaining the mentality of the enslaved and the colonised in his The Psychology of the Oppressed. Even if the colonisers found your ancestors on trees, you should know that Gustav Nachtigal’s anti-slavery drawing which was used extensively to get support for colonisation had a whiteman in the picture of the slave raiders who forced your ancestors into the tall baobab tree to take refuge there. Your type have been causing enough ravages on Africans and can no longer be tolerated. We have had enough of your ancestral curses. Africans must make peace with each other through Internal Reparations and face their common external exploiters who have been setting them against each other for centuries now.

French or British, they all imposed unfair, non-reciprocal and unequal conditionalities on Africans, which are the root causes of the massive poverty and deprivation in Africa. It is not much better in the ex-British colonies too, where their multinationals continue to pay only miserly royalties, like 5%, and some lousy taxes which they do not even pay properly to us for our minerals. That is the true resource curse bedevilling Africans, not how the rent-seeking and corrupt New Collaborators spend the meagre sums left for us. That is why we in cnrem.org have been campaigning against the obnoxious oil agreements signed in Ghana by our stupid, ignorant and greedy leaders who were getting free 2-5% shares for themselves and 10-15% for the whole of Ghana instead of the at least 60% they could have gotten for Ghana had they adopted Production Sharing Agreement fiscal regime like all other African countries nowadays. Everywhere we turned, we were met with astonishing ignorance in all the three forms that can be categorised: blissful, bloody and the most vicious, silent ignorance with an embedded emotional ignorance of some. Their insensitiveness, callousness, lack of empathy for others, very corrupt nature - a clear manifestation of alexithymia which can only be wrought by mental warping replicating itself - need clinical treatment.

This is just a contribution to the new Project against the imperialists and their new Collaborators for the economic liberation of Africans. Clearly, the dictum of Kwame Nkrumah that "seek ye first the political kingdom and everything else shall be added" has failed woefully thanks to the Fifth Columnists planted by the colonizers.

The Project rationale has been outlined masterfully in the insightful article below. We now have many writings available to guide us in the renewed struggle to secure economic emancipation and dignity for Africans from the emergent Global Apartheid being designed to exclude them from the riches derived from their labour and natural resources and then be told natural resources do not develop a country: there is something called resource curse that ensures that. Humbug! We know what and who have killed the 6m Congolese since 1996 in the continuing despoliation of that country in the hunt for its natural resources wealth. It is time to take them on!