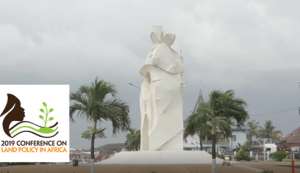 All is set for the third edition of the Conference on Land Policy in Africa (CLPA-2019) which kicks off Monday in Abidjan.

The stimulating policy dialogue that is dedicated to promoting good land governance on the continent, is this year being held under the “Winning the fight against corruption in the land sector, sustainable pathways for Africa’s transformation”.

Speaking ahead of the conference, Ms. Joan Kagwanja of the ECA’s African Land Policy Centre (ALPC), said; “The land sector is one of the most corrupt sectors in our economies and it’s important that in addressing corruption in the broader governance of our economies that we also look at the land sector,” she said.

She continued: “It is also very important that as we promote the use of land to promote sustainable development and transformation of African economies, that we equally focus on corruption especially as it pertains to issues of investments. We will address issues of how we root out corruption through policy making and also better institutions; institutions of land governance that are transparent and accessible to the majority of Africans, especially women and other minority groups.”

The biennial conference, organized by the Land Policy Centre, a joint initiative of the African Union Commission, the African Development Bank and the ECA, provides a central platform for African stakeholders to network and deepen their commitment and strengthen their capacity on land policy development, implementation and monitoring through access to knowledge and evidence-based land policymaking.

This year’s gathering is hosted by the African Development Bank.

The meeting is expected to build consensus among African policymakers and stakeholders on future direction for addressing land governance challenges, with a focus on corruption.

This year’s theme is aligned to the African Union’s declaration of 2018 as Africa’s Anti-Corruption Year. The continental body identifies corruption as a key factor hampering efforts to promote good governance, socio-economic transformation, peace and security.

Like previous sessions, researchers, governments and politicians, civil society, private sector and traditional authorities will participate in the 2019 conference. The inaugural edition was held in 2014, followed by a second conference in 2017, which gathered over 500 participants.

This year over 1,000 participants are expected to attend the conference that runs from 25-29 November.