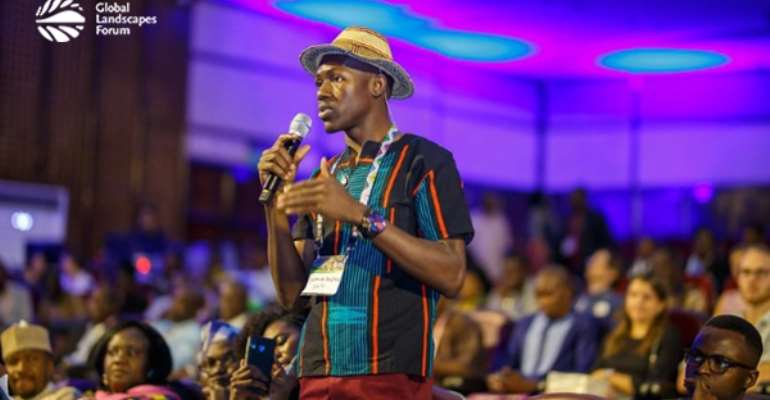 The stirring lyrics of ‘We Shall Overcome’ became the battle hymn of Global Landscapes Forum Accra 2019 as smallholder producers, women, youth and academics rose up to call for shared solutions to the worldwide climate crisis and successful landscape restoration.

From large plenaries to smaller group discussions, GLF participants agreed on the necessity of widespread action based on local knowledge and input to save the planet’s biodiversity, restore landscapes while keeping the voices and rights of people and their communities at the centre of restoration efforts.

“Climate change is a form of war that has come about because of our irresponsible actions,” Nana Yaw Osei-Darkwa, founder of the Green Republic Project, told a plenary session kicking off the two-day event that reached 17 million people worldwide, brought together some 500 individuals from around the globe in the Ghanaian capital. Another 5,000 participated remotely, from 99 countries.

“Nature is rebelling against us (but) it’s time for reconciliation between man and nature,” shouted Yaw Osei-Darkwa, as the youth activist and social entrepreneur brought his audience to its feet to sing the civil rights anthem to overcoming injustice, including landscape destruction.

But restoration efforts will not succeed without genuine consultation of local communities and the acceptance of projects by their traditional leaders, warned Tangu Tumeo, Principal Forestry Officer in Malawi’s Ministry of Natural Resources, Energy and Mining and Department of Forestry.

“In parts of Africa where traditional authority is powerful, recognizing the importance of traditional voices is essential,” she told a session on the necessity of land tenure security for successful restoration work.

“Without involving the community at the heart of what we’re doing, we’re not going to get very far,” she added. “We’re just putting money down the drain and communities don’t appreciate that.”

People’s voices are only likely to be heard where they have clear tenure rights to their land, forests and pastures. Customary tenure systems are effective at organizing fair access to resources, but governments retain underlying ownership rights. “Unless communities have the capacity to negotiate terms suitable to local needs and priorities, investments from donors and the private sector will rarely succeed,” said Steven Lawry, CIFOR Senior Associate.

Momentum for change continued building at the two-day event that opened 29 October, as 11-year-old Ghanaian spinning sensation DJ Switch called for greater attention and justice for women and girls working in degraded landscapes.

“The voice of the women is powerful as a catalyst for change. So, write land restoration songs!” shouted DJ Switch, who urged the audience to join her chant: “I have a tree to plant! Dig, dig and plant. One voice, one song to restore our land,” added the youngster, whose off-stage name is Erica Armah Bra-Bulu Tandoh. The musical theme continued in an evening performance from Ghana’s Grammy-nominated afro-roots star and U.N. Goodwill Ambassador Rocky Dawuni.

African royalty made a rare appearance during the GLF event to support the urgent call for a greater global emphasis on landscape restoration. For Her Royal Highness Sylvia Nagginda, the Nnabagereka (Queen) of Buganda, ecosystem restoration represents a revival of civility, and the “core social values of respect, dignity, responsibility and integrity among others.” The Nnabagereka is known as a traditional leader and advocate of human development rooted in cultural values.

“GLF is building a global movement and it’s time to scale this up. It’s time to empower local communities; to share and to act, on the ground in Ghana, in Kenya, in Peru, in Kalimantan,” declared John Colmey, managing director of GLF.

The GLF event, titled “Restoring Africa’s Landscapes: Uniting Action from Above and Below,” followed meetings of partners and leaders of the African Forest Landscape Restoration Initiative (AFR100), a restoration effort to which 28 African countries have now committed to restore 113 million hectares.

Collaborative knowledge and a clear understanding that landscapes must deliver meaningful benefits will help to ensure that the right restoration work is in the right location at the right time, participants said. “You cannot tell people to stop doing what is feeding them if you do not give them an alternative,” said Basiru Isa of the Indigenous Peoples Major Group for Sustainable Development.

The landscapes of Africa – which boast the world’s second-largest tropical rainforest region, the world’s largest swath of carbon-rich tropical peatlands, great lakes that together hold 27 percent of the world’s freshwater and tropical grasslands that are home to some of the most diverse and rare forms of animal life on the planet – play a major role in shaping the future of human life.

Aside from the carbon sequestration power of undisturbed peat soils and healthy forests and savannahs, African ecosystems are vital to the wellbeing of Africa’s booming population, on track to account for half of the global population growth by 2050.

Participants at GLF Accra also looked ahead to the UN Decade on Ecosystem Restoration that begins in 2021 and aims to massively scale up the restoration of degraded and destroyed ecosystems. The Decade will accelerate existing global restoration goals, including the Bonn Challenge, which aims to restore 350 million hectares of degraded ecosystems by 2030.