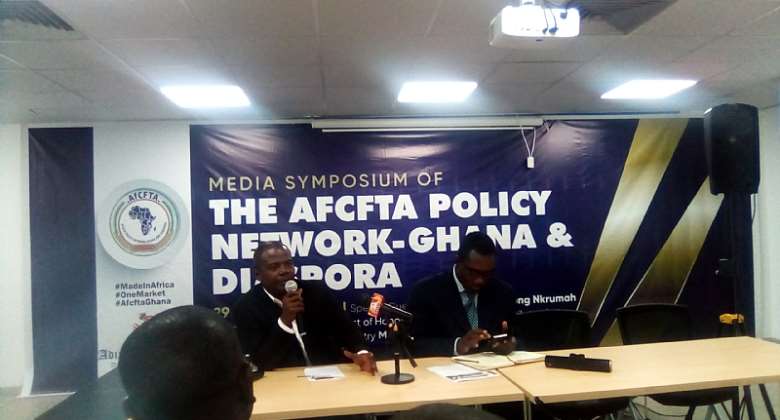 The Country Director of the African Continental Free Trade Agreement (AfCFTA) Policy Network – Ghana and Diaspora, Louis Yaw Afful has said technology is going to play a very significant role in the implementation of the trade deal within the African continent.

He made this known during a media symposium of the AfCFTA Policy Network – Ghana and Diaspora at the Silver Star Towers, Accra.

He disclosed that a new digital complaint system will be put in place to address any border issues that will arise in the course that individual involved in any form of transaction across the borders within the African continent to which the country involved will respond accordingly to complaints they receive within the remits of the agreement.

"There is also a new digital payment system called the Pan African Payment system which has a very swift platform to which most of the banks are going to be hooked on to. Thus, it is going to aid individuals in the areas of bank transfers, among the rest, " Mr Afful noted.

He added that there are going to be other digital interventions that will be initiated in the agreement such as the e-commerce.

A Deputy Country Director of AfCFTA Policy Network – Ghana and Diaspora, Emmanuel K. Bensah said, “I think AfCFTA is an opportunity for Africans to finally take charge of their destiny. We have the services sector, tourism sector, transport sector, creative industry sector, among others under which AfCFTA will be working. So that people can start having innovative ways to make some money.”

He noted that the African Union (AU) has a policy in place known as ‘Rules of Origin’ that ensures that only the products of countries which are party to the trade agreement obtain the benefits of the agreement.

Kwaku Bamfo – Boateng, 3rd Deputy Country Director of AfCFTA Policy Network – Ghana and Diaspora indicated that, “Frankly, I see AfCFTA as the salvation of Africa. The beginning of things are normally a bit difficult but going forward, if you look at what other people have done such as the Europeans Union (EU), it shows you that it is doable.”

He continued, “We just have to do it in our own context and do it in a way that will suit us and I believe that this is what will save Africa from being a 3rd world continent.”