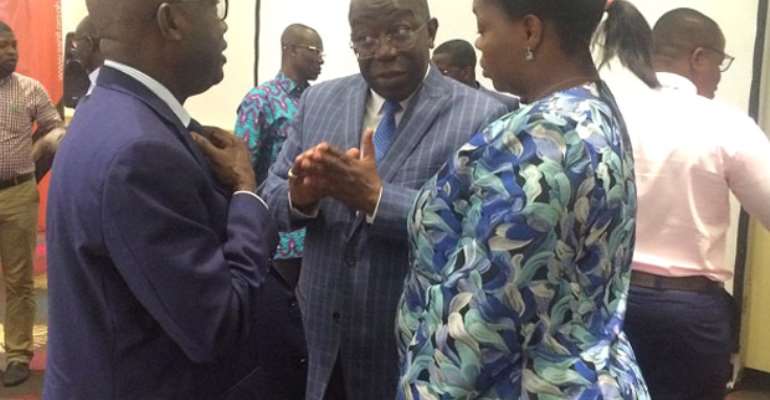 Dr. John Tenkorang interacting with some employers at the event

A total of 4,310 criminal cases are pending in court against employers for failure to register establishments or workers, failure to submit contribution reports or employers' records, and failure to pay contributions and associated penalties by the end of the first half of the year.

The Director-General of Social Security and National Insurance Trust (SSNIT), Dr. John Ofori-Tenkorang, made this known on Thursday when he engaged employers at a breakfast meeting in Accra.

He noted that SSNIT was intensifying vigilance on matters relating to pension contributions.

Besides, the Director-General said some employers in the private sector owed SSNIT some GH¢64.67 million.

He warned, “If we fail to collect these debts, it does not absolve us of our responsibility and obligations to the worker.” “We understand that businesses go through hard times and that is why we engage employers who might for one reason or the other delay in complying,” he added.

He said SSNIT was sometimes compelled to take legal action against the employers. He, therefore, encouraged employers to contact their respective compliance officers for assistance if they encountered any challenge in paying for their workers.

The Director-General gave an assurance that management of SSNIT would remain focused on the core mandate of the Trust, and would deliver on the obligation to workers and all contributors, adding that the Trust spent over GH¢250 million monthly on pensions.

He said the number of active pension contributors in Ghana had increased significantly to 1.5 million over the past three years.

He disclosed that from the 1.2 million active contributors figure in 2017, the current management of SSNIT had worked hard over the past three years to increase the number of contributors.

According to him, the Trust had been embarking on intensive public education and engaging key stakeholders, including university students.

He stated that the Trust had over the past three years engaged about 7,000 university students. He stressed the need to have their employers pay their social security when they start working.

Earlier, the Director-General commended employers who pay social security for their workers, and encouraged them to continue making the contributions.

Trade Minister’s promise to open Komenda Sugar factory ‘a me...
25 minutes ago