Meet The Woman On The Old ¢100 Banknote

Docia Angelina Naki Kisseih is the lady whose picture was embossed on the legal tender the old ¢ 100 banknote.

In 1961 she was made Chief Nursing Officer of the newly independent Ghana: her job title inherited from the earlier British system. 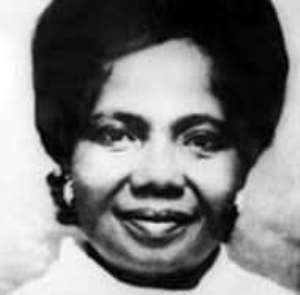 Her pioneering efforts developed nursing education and practice in Ghana.

She became the first nurse in Ghana with a doctorate degree which she obtained from Boston University in 1981 while lecturing at the University Of Ghana Department Of Nursing (between 1975 & 1981).

She is the founder and first president of the Ghana Registered Nurses Association (GRNA). She also served on the National Health Planning Committee and the Nurses and Midwives Board.

Her honorary degree was conferred ceremonially at Naki Kisseih 's home because of her frailty and she died later that month, on August 2008.

In 2015, the Ghana Registered Nurses Association (GRNA) instituted a series of lectures to be called the Dr Docia Kisseih Memorial Lectures.