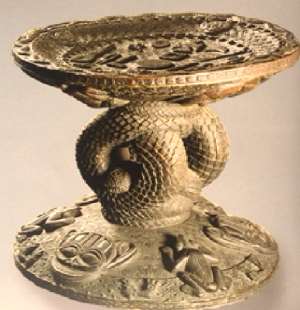 Readers may recall that we have often called on European museums to reveal the number of looted African artefacts they have in their museums and depots. We have often pointed out that without knowledge of the African artefacts Europeans hold, most African peoples would not be able to formulate any demands for restitution. The identification of objects and their locations are indispensable for any reasonable demand for restitution. Yet European museums keep saying they have not received any demand for restitution from African States and peoples whilst at the same time refusing to tell us what looted objects they hold.

One is amazed to realize that despite all the recent discussions on restitution of African artefacts and the interest in the subject created by the famous Ouagadougou Declaration of President Emmanuel Macron on 28 November 2017 and the ground-breaking report of Felwine Sarr and Bénédicte Savoy,

The Restitution of African Cultural Heritage. Toward a New Relational Ethics...

European museums and other institutions have not yet opened their books to all those who want to carry on research on African artefacts and culture. What then is the use of the various declarations by European Ministers and others about their willingness to cooperate with Africans and their willingness to restitute looted African artefacts? What about all the expressed desires for circulation and exchange of artefacts? What is one to make of the declarations about ‘shared heritage’ when they are not willing to share information with Africans by given access to their inventories and archives on African artefacts? Europeans seem determined to keep the upper hand in all situations. But can one blame them alone in the face of complacent African ruling classes that have not learnt anything from slavery and colonialism and seem only too ready to comply with the wishes of the West which coincide with their short-term interests but far away from the wishes of the fathers and mothers of African Independence and of their peoples?.

Now a group of internationally acclaimed anthropologists, archaeologists, artists, art historians, historians, jurists, philosophers, political scientists, writers and other scholars, have signed a petition published below, requesting the German authorities to open finally their inventories and archives of the African objects they have in their museums and other institutions.They ‘demand that public museums and their supervisory authorities, municipalities, federal states and the federal government make the inventories of African objects in their respective collections available worldwide as quickly as possible’.

Even though the appeal is directly and specifically addressed to German authorities, we consider the substance of the request as applicable to all Western museums and institutions that hold African artefacts and other objects to open their inventories and archives of African objects so that we can really start discussing, with full knowledge and information, the fate and disposition of African artefacts.

Without full and unrestricted access to the information on African objects, it will not be possible to discuss honestly and on basis of equality. Needless to add, I fully support the aims and demands of this petition. https://doodle.com/poll/6vigsgt2hwm83dcy

Ngonso: the female founding dynastic figure from the Nso Kingdom, in the Western Grassfields, Cameroon. This revered figure was stolen out of its safe-keeping place in the Nso Palace during German colonial occupation and is now in Ethnologisches Museum/Humboldt Forum, Berlin, Germany.

We demand unrestricted access to museum inventories of African objects in Germany!

An open appeal to the Conference of Ministers of Culture.

The public debate about Germany's colonial past and how to deal with colonial objects in public collections has generated momentum. The discussion which was sparked by the plans for the Humboldt Forum in Berlin intensified with the 2018 publication of the report commissioned by Emmanuel Macron Rapport sur la restitution du patrimoine culturel africain and has already brought about concrete steps. The current coalition agreement includes a commitment to a critical evaluation of the colonial period. In addition, State Ministers Monika Grütters and Michelle Müntefering took a stand in an opinion piece, where they urged, among other things, to "enter into a genuine dialogue with source communities and thus work towards the future in cooperation" (FAZ, 15 December 2018). In a unique initiative in Europe, Germany provided two million euros of funding at short notice for research into the provenance of objects from a "colonial context", initially funding mainly smaller projects. However, as researchers and creative industry professionals from many African and European countries, we ask for more: transparency!

It is scandalous that even though this debate has continued for two years now, there is still no unrestricted access to German museum inventories. Precisely which African art is preserved in public museums in Germany today? From which regions? Which type of objects? We want and need to know this, if we want to work together on the colonial past. We need free and unrestricted as well as unchecked access to inventories of African artefacts! Knowledge of the holdings is an essential prerequisite for any dialogue. In addition, an independent assessment of cultural assets from within Africa itself must be enabled, without dependency on a German partner. The objects in question can contribute to a reactivation and new discovery of knowledge and memory in post-colonial societies. This applies to Africa as it does, of course, to other world regions.

A common evaluation of colonialism as well as a fresh investigation of the past which proceeds independently of German institutions can only take place if details of objects and any information held about them in museums finally become public knowledge. At the moment, every single artistic or academic project and each international delegation needs to contact each individual German museum and request access to information. This creates duplication, extra work, lack of transparency, deterrence and quite often results in failure.

Transparency does not require tedious data processing and completed digitalisation projects, as often claimed. Work on the inventories will never be complete and will always remain work in progress. There is no need to wait.

For this reason, we demand that public museums and their supervisory authorities, municipalities, federal states and the federal government make the inventories of African objects in their respective collections available worldwide as quickly as possible, regardless of the degree of completeness or supposed perfection of these inventories. Simple scans and lists are sufficient. We need them now. Only then can the dialogue begin.

REVENGE: A lady got pregnant by her sister’s husband who was...
38 minutes ago