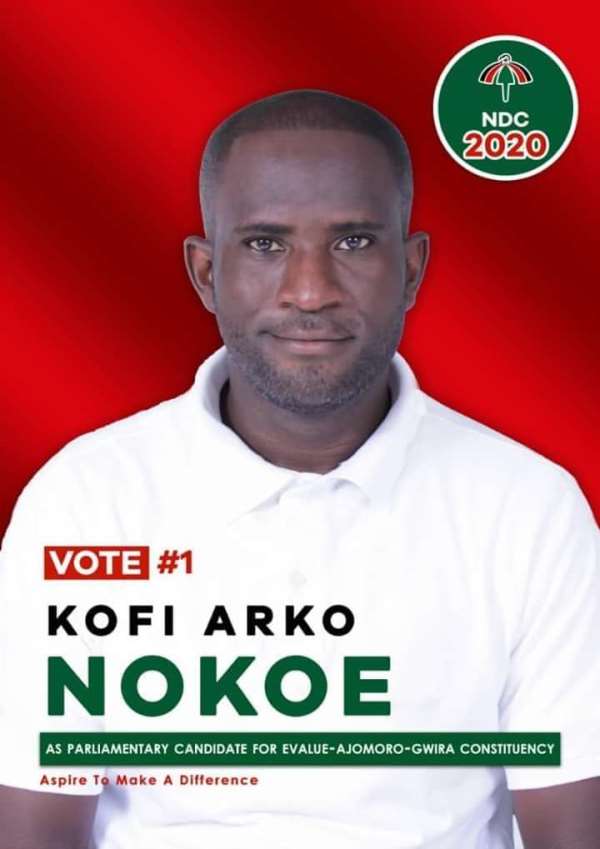 The Evalue-Ajomoro Gwira NDC was supposed to have their parliamentary primaries on Saturday, August 23, 2019 but it was postponed by the Functional Executive Committee (FEC) of the party for unknown reasons.

The FEC later cleared the road for the primaries to be conducted over the weekend.

The party conducted the parliamentary primaries on Saturday, September 28, 2019 in the Evalue-Ajomoro Gwira Constituency.

So far the party has elected all their 2020 parliamentary candidates in the region excluding Tarkwa-Nsuaem who are expected to hold their parliamentary primaries within this month.

Two aspirants contested for the parliamentary slot on Saturday and they were; Kofi Arko Nokoe and Herbert Kua Dickson.

He beats his main competitor, Herbert Kua Dickson who was contesting the primaries for the second time pulled 297 votes representing 34. 9 per cent.

In all, 850 delegates making up the electoral college, voted for the two aspirants that battled it out for the position in the area.

The election was supervised by Madam Nana Ama Ofori, the Municipal Director of Electoral Commission in the Nzema East Municipality and witnessed by the NDC's Western Regional Executives.

At the end of the race, only seven votes were recorded as spoiled ballot papers.

The Evalue-Ajomoro Gwira Constituency has been one of the swing seats swaying to the direction of both the governing New Patriotic Party (NPP) and the National Democratic Congress (NDC).

Addressing the charged atmosphere after the polls, the candidate elect, Kofi Arko Nokoe thanked the delegates for electing him to battle it out for the Evalue-Ajomoro Gwira parliamentary seat in 2020.

Kofi Arko Nokoe also thanked his teeming supporters for the unflinching support given him.

He outlines his next line of action and promised to welcome all on board, with the assurance that he would work with the defeated aspirant to recapture the seat in 2020.

He also said he was ever ready to beat the incumbent NPP's MP who is also a Minister of State, Catherine Afeku in 2020.

"Hon. Catherine Afeku has failed and the people are saying they are voting against her come 2020. This seat is for us and we are taking it back", he confidently said.

He pledged that "I will continue to help the youth of this area and I not wait till I become an MP for this area, everybody in this Constituency knows my track records, what I have done so the 2020 victory is mine".

He emphasized that the NPP had failed to develop the Constituency adding that the projects which were started by the John Mahama-led administration have been abandoned.

He bemoaned how the Akufo-Addo-led Government has failed to develop the Mahama Day SHS at Bamianko.

He said currently the school doesn't have electricity and potable water.

The Youth activist bemoaned how the Akufo-Addo-led government has failed to develop the Mahama Day SHS at Bamianko.

He pledged that the second coming of John Mahama as a president would address these challenges facing the school.

He also said the Akufo-Addo-led government has failed to reconstruct the Gwira roads to help farmers send their foodstuffs to the markets.

On his part, the Western Regional Secretary of the party, Mr. Joseph Nelson thanked the supporters of the two aspirants for conducting themselves well before, during and after the primaries.

He called on all the party faithfuls to rally behind the winner to reclaim the Evalue-Ajomoro Gwira parliamentary seat for the party in 2020.

He also advised the winner to work with everybody in the party and urged them to work hard for John Mahama to be elected as the next President of Ghana in 2021.

Mr. Nelson said the only government who has Nzemaland at heart was NDC government and expressed optimism that the Nzemas were going to vote massively for NDC in 2020.