The Registrar General Department (RGD) Of Ghana Is Disappointing Ghana 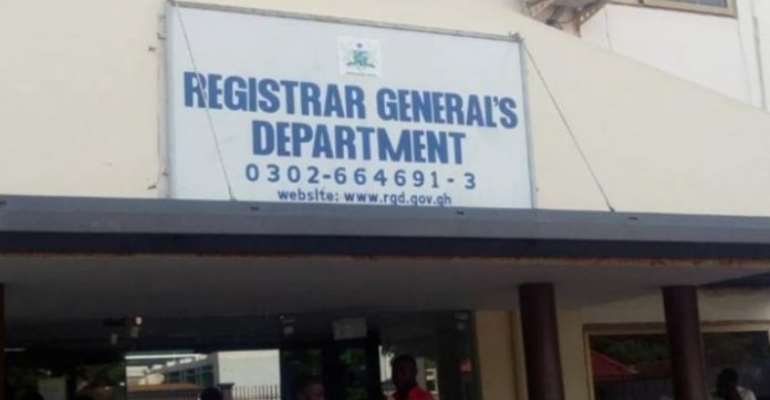 Though unemployment rate is a generic economic problem, Ghana has battled with the intensity of this problem in her economy for a longer period of time. Efforts are made by successive governments to reduce the unemployment rate in Ghana but the situation keeps worsening. One of the strategies adopted by various governments is the promotion of entrepreneurship. Notably in the current government’s strategy is the NEIP program to battle unemployment in Ghana.

However, I believe that the efforts made by the government and other key stakeholders in the economy are like “water being poured into a basket.” There are some institutional holes causing the efforts to drain.

In my first encounter with the Registrar General Department, I was acting on behalf of my boss to register 4 companies. These companies are strategized and predicted to employ about 5000 youth within the next 2 years. My boss (whose name I will not reveal now) and I downloaded the forms on the website and filled them. When I submitted the forms to the RGD office in Adum, I was told that they do not accept the forms downloaded from their website. This in itself is senseless because if the forms are useless, then why is it there?

I had to buy new forms at the RGD office, then fill them and submit them the next day. I was told to change the wording of the principal business activity. After doing that, one lady at the vetting session then told me that none of the business names made sense to her so she cannot approve it.

Apparently, the problem was not with the names. I overheard her telling her colleagues “how does he expect me to register four companies at a go.” She intentionally meant to frustrate me so that I will not register the businesses. I had to engage in a heated argument with them concerning “the name of the business not making sense” and I was referred to the lawyer at the branch. I went to the Lawyer at the RGD office in Adum. When I was shown the way to her office and I was heading there, the lady called the lawyer and had a talk with her. I was in front of the lawyer’s door listening to the conversation she was having with the “vetting officer.” The Lawyer had already made up her mind and she also said the same thing that the name does not make sense to her.

I inquired her to give an objective reason why the name is not appropriate and I was so disappointed that someone regarded as a lawyer and for that matter a Lawyer at the RGD office could not raise a single reason why the name was not appropriate. She just kept sounding “it doesn’t make sense to me.” Just that! I inquired if the name is misleading? has profanity? Is already registered? Mismatch the business’ purpose? And many others and she could not answer any of them. I was so disappointed in the RGD at that moment.

I was eventually told by a third party that if I do not go through an agent who will charge me higher and tip the officials, my company will not be registered: I will be frustrated continuously. That case went to lie.

A month later, I wanted to set up a new partnership. I bought the forms from their office because of the previous experience I had with the RGD officials in Adum.

I filled the form and submitted it. The same excuse that the name does not make sense to them was given. It took a month of back and forth till eventually they accepted to register the enterprise. In two weeks’ time, I had a text message that the company is registered. I had another text message in the following two weeks that the certificates are printed and this was in Mid-July. I have been asking one of my employees to be checking up on it since then and they keep telling her that the certificate is not ready. In mid-August, she was told that the one to sign the certificate is on leave so no one can sign (This is also very immature that when one person goes on leave in RGD, there is no one to take his place and sign official documents). We kept going there and the same story was told over and over that the one to sign is on leave.

Just today, we sent one of the employees to check on it and we are told that the certificates are missing so we have to start the application process again. If this is not nonsensical, then I do not know what else is: How can the certificates be missing in the first place? Then why must we bear the cost when we never had the certificate? What is the government doing? Our institutions are not working. RGD is creating more problems to the economy. The workers need to be checked. Bribery and corruption is too much in that institution and it must be checked.

The African Centre for Entrepreneurship and Youth Empowerment is looking into this and will publish its findings soon. I appeal that the government must look into the operations of the Registrar General Department and purge out the “thorns” else unemployment rate will continue to rise.