Mugabe And Nkrumah: The Tale Of Two Red Cockerels 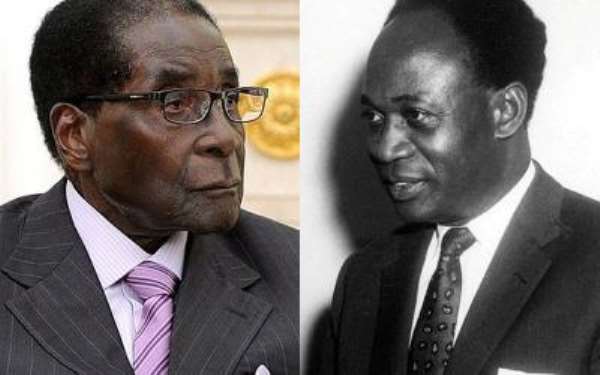 Tony Blair's New Labour purposefully undermined and sabotaged the political-economy of Zimbabwe from late 1997. The double-face and double-crossing British politicians therefore crippled the ZANU-PF Red Cockerel in the same manner as Harold Wilson undermined and sabotaged the Nkrumah regime and the CPP Red Cockerel from 1964. Harold Wilson was the Labour Party prime minister then. Rhodesia was then at the heart of the conflict between Ghana and Britain. Harold Wilson fought President Kwame Nkrumah to maintain and sustain white supremacist stranglehold as Tony Blair fought Mugabe to maintain and sustain white supremacist stranglehold on Zimbabwean land and finance capital, itself created by the land and the labour of the people.

It must be stated clearly that there can be not capital without land and labour. Capital has no existence of its own. Apartheid and settler colonialism are a politico-military act of land appropriation and enslavement of labour for the crafted purpose of capital accumulation.

Whereas Tony Blair and subsequent British prime ministers could not overthrow Mugabe they destroyed the Zimbabwean economy and created a quicksand underneath the ZANU-PF regime...as did the Wilson government to the CPP regime.

Whilst cross-referencing history we must remind ourselves that Kenneth Kaunda is still alive and he is the only surviving member of frontline leaders who saw to the defeat of apartheid South Africa after the liberation of Angola, Mozambique, Guinea-Bissau and Namibia with the "blood, sweat and tears" of self-sacrificing and fearless people of Cuba.

While at it we must not forget that the British created and funded an opposition against President Kaunda using a trade union bus conductor, who eventually "won democratic elections" to dislodge Kaunda. Guess who this quisling was and the name of his party? Frederick Jacob Titus Chiluba was President of Zambia from 1991 to 2002. His British funded party was the Movement for Multi-party Democracy. Tony Blair had thought that he could succeed with Morgan Tsvangirai against "Uncle Bob" Mugabe.

Yes, this is a Tale of Two Red Cockerels to be researched further and retold as a catechism to the younger generation for them to value, protect and advance the collective Pan-African "national interest" against neocolonial onslaught. Both the CPP and ZANU-PF have the Red Cockerel as their party symbol. Fed up with British duplicity and intransigence over Rhodesia Nkrumah pulled out of the Commonwealth. Robert Mugabe likewise pulled Zimbabwe out of the Commonwealth.

For the record, Baffour Ankomah, then editor of New African magazine, and I played our role as soon as Tony Blair and Claire Short went into gear to walk over the Lancaster House Agreement and undermine the Mugabe regime with George Bush at the White House. I arranged a meeting with the then Zimbabwe deputy High Commissioner to the Court of St. James, Mrs. Pavelyn Musaka and Mrs. Tendai Barre, then Director of Government Institutions Development Department at the Commonwealth Secretariat and now Chair of the Lands Commission, Harare. Together with these two formidable patriots, Baffour and I agreed on a strategy to create a countervailing force against British designs in Zimbabwe using the power of the media. We met regularly in the Pall Mall area and co-opted others as when necessary. Baffour and I did this pro bono. I had a special relationship with Zimbabwe as Sally Mugabe entrusted me with arranging where she and/or Uncle Bob would stay on visits to London, at one point in time in the mid '80s. Sally introduced me to grieving Mrs. Graça Machel when her husband, President Samora Machel, was killed in a plane crash downed by apartheid South Africa on 19th October 1986 at Mbuzini. Sally asked me to arrange for Graça to come to London to cool off and gather herself. I was in a position to do so as I was then the Special Projects Coordinator, Greater London Council under the progressive leadership team of Ken Livingstone, Paul Boateng, etc. who provided budgetary support for the Anti-Racist and AntiApartheid campaigns.

It was with such enlightened support that I initiated and got the period from 1987 to 1988 declared AFRICAN JUBILEE YEAR which was launched in July 1987 at the Westminster Central Hall by Sally Mugabe, who stood in for her husband, President Robert Mugabe. Burning Spear was the guest artist and he brought the house down. That was a memorable experience as I chose the very Central Hall because it was a meeting place for CLR James, George Padmore, Nkrumah, Kenyatta and others in their preparations for the 5th Pan-African Congress held in Manchester in 1945. Yes, Burning Spear evoked the spirits of Nkrumah, Lumumba, Garvey, Bookman, Yaa Asantewaa, etc and captured the mood of the period. The AFRICAN JUBILEE YEAR DECLARATION was unveiled and read. Looking into the future, the Declaration in parts enjoined the local authorities to lend their support to "... the demands of Africans, both at home and abroad, for just restitution and recognise that the root causes of racial discrimination, inequality of opportunity and poor relations between persons of different racial groups within their boroughs are imperialism, colonialism and neocolonialism. The years of incalculable damage done to the African continent based on the myth of white supremacy bear witness to this fact... " (I drafted the declaration mindful of the imperative of reparations and with the help of the Greater London Council under Ken Livingstone, Association of London Authorities under John McDonnell and Inner London Education Authority under Herman Ouseley, boroughs in the UK endorsed the African Jubilee Year Declaration. McDonnell is now the Shadow Chancellor of the Exchequer and Ouseley sits in the House of Lords.)

I must recall that African Jubilee Year Declaration gave birth to Black History Month (UK) to which President Thomas Sankara was invited but couldn't attend. Instead, he sent a video recorded message. It was a spirit moving spectacular period.

I am recounting these captivating periods in our contemporary history in gratitude also to the humanising spirit of Ken Livingstone, Lord Paul Boateng, Lord Herman Ouseley, John McDonnell and their colleagues. I am documenting also this as a tribute to the fighting spirit of Baffour Ankomah who stayed the course with Zimbabwe and in a great way helped to checkmate the orchestrated Anglo-American-Zionist propaganda against the Mugabe regime.

Join me in salutation also to the IC Publication team led by Afif Ben Yedder, who risked the economic health of their publishing house to provide a veritable platform for Baffour to risk his life to tell the other side of the unfolding Zimbabwe story to a global audience through the barrel of the pen.

In conclusion, Her Excellency Pavelyn Tendai Musaka, later became the Doyen of the Diplomatic Corps in Ghana as the long-serving loyal Zimbabwe Ambassador. She arranged special visits for President Mugabe to go to the grave site of his son in Takoradi. I helped to get the husband, Mike Musaka, a job with the African Union. Mr. Musaka is now a Senior Senator in the Zimbabwe legislature.

Baffour Ankomah is blessed with a Zimbabwean wife who we affectionately call QEH, Queen Elizabeth of Harare, with our tongues in our cheeks. Baffour fought the good fight to uphold the principle of AFRICAN LANDS IN AFRICAN HANDS and in Zimbabwe. And such is the abiding legacy of Robert Mugabe who chose to follow the footsteps of the Osagyefo Kwame Nkrumah. Mugabe never wavered and could not be pushed to betray the people of Zimbabwe and likewise Pan-Africa where the issues of land and neocolonialism were concerned. Robert Gabriel Mugabe, your alter ego, Nkrumah is waiting for your "salute report". Nzinga, Tubman, Asantewaa and Sally will tell Mugabe off for his lapses during his old age. Samora Machel, Nelson Mandela with Julius Nyerere looking on will come to the aid of Robert Mugabe as Sally and Winnie Mandela laugh it all off in a forgiving and reconciliation spirit.

Meanwhile Kenneth Kaunda is waiting for some good news from Ghana to carry to Nkrumah.

With Mugabe, the great walls of Mwenemutapa still stand.