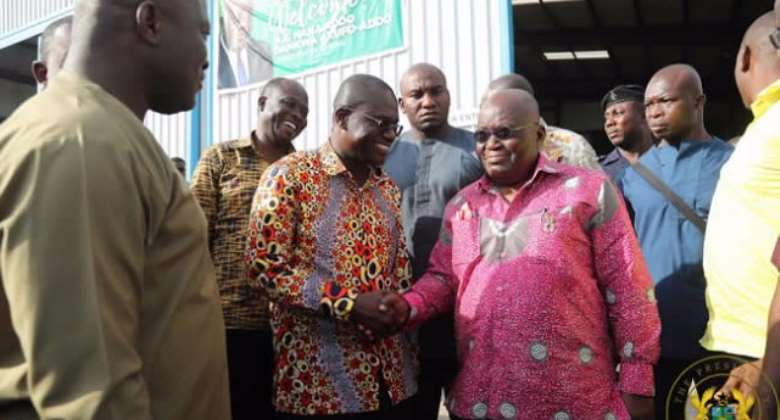 The President, Nana Addo Danquah Akufo-Addo and the CEO of the JOSPONG GROUP of Companies, Dr Joseph Siaw Agyepong in a pose.

The JOSPONG group of companies, erstwhile owners of the Great Consolidated Diamonds Ghana Limited, is kicking against what it described as ‘illegitimate’ takeover of the company by government.

A statement released on Monday by the Group said, it has invested over $20m in an attempt to revive the company, which was closed down with its premises in a dilapidated state at the time it took over.

“In the development plan to revive the mine to full-scale operations, we have undertaken numerous feasibility studies and development activities amounting to over 20 million USD.”

However, the Government acting through DIC by a letter dated April 9, 2019, abrogated the agreement between the parties.

The management of JOSPONG Group of Companies has described the decision as unlawful.

JOSPONG says facts presented by the government for the seizure are inaccurate and a misrepresentation of the terms of the agreement executed between the parties.

The JOSPONG Group of Companies particularly bemoans the government’s actions because it came at a time “the GCDGL and its strategic partners have reached an advanced stage to execute a 50 million USD investment to operationalize the mine of which a memorandum of understanding has been signed.”

The company has resolved to ensure that its rights and interests are protected.

The full statement from the JOSPONG group of companies is published below:

JOSPONG’S RESPONSE TO GOVERNMENT’S HOSTILE AND ILLEGAL TAKEOVER OF AKWATIA MINE.

Accra, September 23, 2019; The attention of the management of the Jospong Group of Companies (JGC) has been drawn to a publication by the Daily Graphic newspaper on Friday September 20, 2019 and also in other media platforms on the abrogation of the Great Consolidated Diamonds Ghana Limited (GCDGL) contract by the Divestiture Implementation Committee (DIC) due to the GCDGL’s alleged inability to meet the contract terms.

We wish to state that the facts contained in the publication are not accurate and are a misrepresentation of the terms of the agreement executed between the parties.

JGC took ownership of GCDGL from government’s Divestiture Implementation Committee (DIC) in the year 2011. At the time of acquisition, the company had been closed down with its premises in a dilapidated state with obsolete machinery and equipment.

Upon the assumption of ownership of the mine in 2011, and immediately after the execution of the Agreement between DIC and GCDGL, substantial investments were made in an attempt to revive the mine and make it commercially viable. Subsequently, GCDGL has also focused on meeting the necessary regulatory, engineering and restructuring works necessary to achieve this objective. We wish to state that all due processes, guidelines and regulations provided by DIC to regulate the said transaction were duly followed.

Consequently, we hereby address the pertinent issues raised in the publication as follows:

Abrogation of contract by Government – Following the acquisition of the mine, GCDGL and the JGC have made several attempts to make the mine commercially viable, albeit not yet entirely successful. This led to series of communication with the DIC with the aim of reaching a mutually satisfactory direction on how to proceed with same.

Despite these attempts, the Government acting through DIC by a letter dated 9th April 2019 purported to abrogate the agreement between the parties without following due process. GCDGL through their lawyers drew the attention of DIC’s lawyers to the illegality of the intended action of the DIC, and proceeded to issue a writ of Summons and an accompanying Statement of Claim to protect the interest of the company. It is therefore unfortunate that Government, after filing a Statement of Defense in the aforementioned suit, proceeded to take over the management of the company without recourse to the law and tenets of good governance.

GCDGL, has since the acquisition made payments on account, and through its principal shareholder been in dialogue with Government with the aim of settling the outstanding liability by way of a set-off from Government’s liability to the shareholder. Government is yet to respond to this proposal despite repeated overturest

Refurbishment of the Akwatia Mine and Hospital

Management states that since the acquisition of the mine, millions of dollars have been invested into the mine which had been completely run down at the time of acquisition. In the development plan to revive the mine to full scale operations, we have undertaken numerous feasibility studies and development activities amounting to over 20 million USD. The GCDGL and its strategic partners have reached an advanced stage to execute a 50 million USD investment to operationalize the mine of which a memorandum of understanding has been signed.

Illegal and Hostile takeover of Mine

The action by SIGA is illegal, unconstitutional and regrettable in a nation that is governed by the tenets of democracy. On Thursday 18th of September 2019, Executives of SIGA assisted by the BNI and military apparatus illegally entered GCDGL premises, took over the security of the mine, closed down all the offices, seized staff vehicles and mobile phones, threatened staff, and closed down the only hospital which serves the community without regard for the patients who were receiving treatment. We wish to state that at all times, due notice was not served on the company.

Their conduct created pandemonium in the rather peaceful community and deprived the community of the very livelihood the facility had given them over these few years. Consequently, the appointment of the Interim Management Committee by SIGA is void and has no legal basis.

We emphasize our position that the conduct of SIGA amounts to total disregard for rule of law and good governance. As a responsible company, we reiterate the fact that the matter is presently before a court of competent jurisdiction and we will therefore wait for the final determination of the matter.

Management wishes to assure all its stakeholders including the chiefs and people of Akwatia and the workers that it is doing everything possible to resolve this matter using the appropriate legal remedies.

The Jospong Group of Companies currently employs over 50,000 people and remains committed to continued contribution to national development through the provision of jobs.